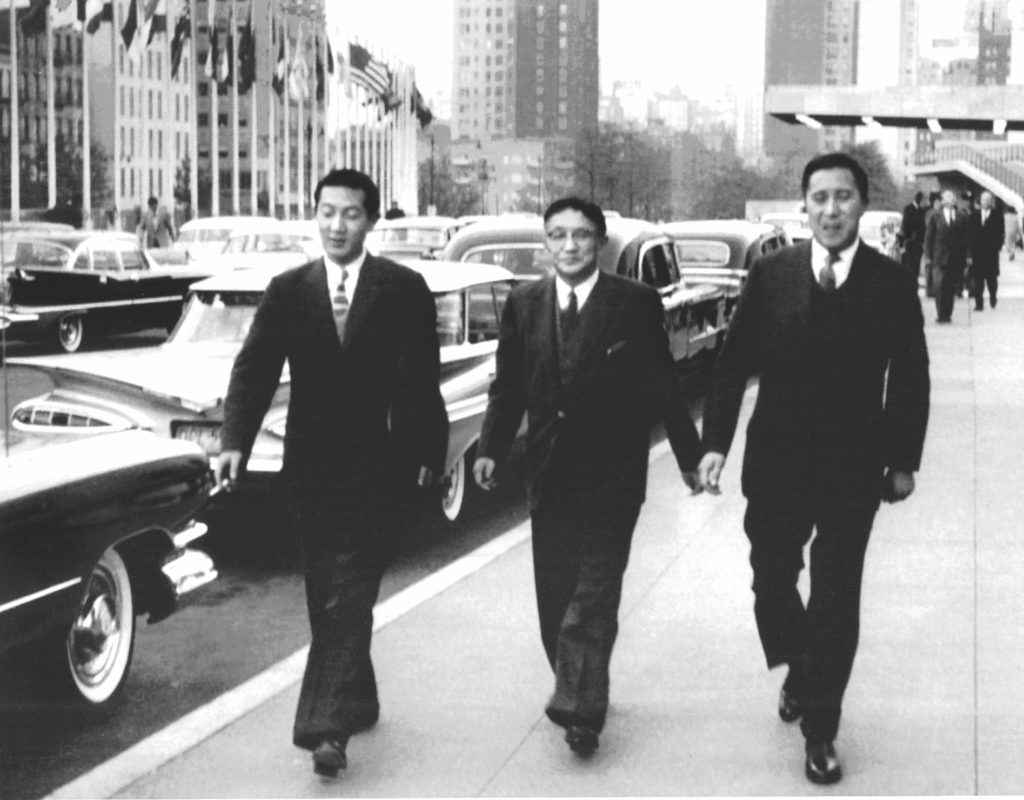 She was barely a 17-year-old high school student at the Second National Middle School of Tsekog County in eastern Tibet. Unlike her peers cherishing the school holidays, Bhenchen Kyi stood under the clear night sky of 9 December 2012, holding a can of gasoline and set herself alight calling for the long life of His Holiness the Dalai Lama and freedom for Tibetan people. It was on the eve of Human Rights Day, the day when the Universal Declaration of Human Rights was adopted by the United Nations General Assembly 70 years ago.

The 70th anniversary celebration of the adoption of ‘international Magna Carta for all mankind,’ as declared by the former United States’ First Lady and the then Chair of the UN Human Rights Commission, Eleanor Roosevelt loses relevance when it comes to the case of Tibet and Tibetan people.

UDHR and its significance:

The UDHR was the result of countries’ collective realisation of the atrocities leading to the World War II and their conscious decision to not disregard or denounce human rights. The barbarous acts leading to the deadliest conflict in the history of mankind had ‘outraged the conscience of mankind’. After the war, in an effort to bring peace in the world, countries came together to establish United Nations in 1945 and at its very first session, the UN General Assembly reviewed a draft of Declaration on Fundamental Human Rights and Freedom. It was later referred to the Commission on Human Rights by the UN Economic and Social Council.

The Commission comprising of 18 members from various nationalities and political, cultural, and religious backgrounds established a special Universal Declaration of Human Rights Drafting Committee in 1947. The Committee was chaired by Eleanor Roosevelt with Peng Chun Chang of the then Republic of China as the Vice-Chair. After two years of drafting, two sessions of the Committee, three sessions of the Commission, 81 meetings of the Third Committee of General Assembly and 168 resolutions of amendments, the Universal Declaration of Human Rights was finally adopted by the UN General Assembly on 10 December 1948 with 48 Member States voting in favor, none against, 8 abstentions and two non-voting of the total 58 UN Member States then.

UDHR is the bedrock of international human rights system. It represents the aspirations of a generation which believed ‘in the advent of a world where human beings shall enjoy freedom of speech and belief and freedom from fear and want.’ It recognises ‘the inherent dignity, equality and inalienable rights’ of human beings. It is a pledge by the Member States to ‘promote universal respect for and observance of human rights and fundamental freedoms’, equally applicable to all human beings irrespective of which nation, gender, ethnicity, religion, colour, language or any other class one belongs to. Together with International Covenants on Civil and Political Rights and on Economic, Social and Cultural Rights, they form the International Bill of Human Rights1.

But the crucial question is, has the commitment of the international community to uphold the human rights enumerated under UDHR failed in the case of Tibet and Tibetan people?

I ask this because, 57 years ago on this day, the Resolution 1723 (XVI), Question of Tibet was passed by the UN General Assembly. This was the second resolution on Tibet. The General Assembly expressed its grave concern about the ‘violation of the fundamental human rights of the Tibetan people’ and called for the cessation of such practices.

This year also marks the 30th anniversary of the large-scale demonstrations in Lhasa, Tibet led by a group of monks popularly known as “group of ten,” organized to coincide with the 40th anniversary of UDHR. These monks were convicted of ‘producing reactionary literature’ and sentenced to imprisonment terms ranging from 5 to 19 years. The “show public trial” ruled the Tibetan translation of the Universal Declaration of Human Rights as part of the ‘reactionary literature’ allegedly produced by the monks.

Whereas in exile one of the first tasks of the Foreign Relations Office of the Central Tibetan Administration was to translate the Universal Declaration of Human Rights into Tibetan language2. UDHR is one of the cornerstones of the draft democratic constitution for Tibet promulgated by His Holiness the Dalai Lama way back in 1963 and of the Charter of the Tibetans in Exile adopted by the Tibetan Parliament-in-Exile on 14 June 1991. In fact, the Charter mandates Central Tibetan Administration to adhere to the principles of UDHR3.

Our belief in the UN mechanism and the UDHR has been demonstrated way back in 1959, when on the heels of China’s occupation of Tibet, the Tibetan Delegation to United Nations (comprising of Gyalo Thondup, Shakabpa and Rinchen Sadutshang) lobbied hard for Tibet resulting in the subsequent UN Resolutions on Tibet. Rinchen Sadutshang in his memoir ‘A Life Unforeseen: A Memoir of Service to Tibet’ narrates about their sense of belief that the principles on which the UN Charter and the UDHR are based would support the case of Tibet at the UN4.

But in Tibet, Tibetan translation of the “new Magna Carta” is a sparsely available literature, constantly subjected to online censorship, many not even knowing the existence of UDHR5. The Tibetan version of the UDHR available on the UN Website is the translated version provided by the Representative of the Office of His Holiness the Dalai Lama. This is indicative of China’s vested interest in bowdlerizing human rights dialogue on Tibet.

Any discourse on human rights in Tibet is considered treasonous.  Tibetan writers and artists daring to do so face torture, enforced disappearances and arbitrary detention. The editors and contributors of the magazine Shar Dungri (East Conch Mountain) published by a group of Tibetan students in June 2008 were arrested and sentenced to prison. The author of Tsenpoi Nyingtop (Courage of the Emperor) Gartze Jigme was arrested and sentenced, twice in 2013. The author of “The Division of Heaven and Earth: on the Peaceful Revolution of the Earth Rat Year” Tagyal, popularly known by his penname Shogdung (morning conch) was arrested and imprisoned in March, 2010.  Any literature or body of work that alluded to the human rights situation in Tibet and the rights of Tibetans have been banned.

This year marks 20 years since the first Tibetan self-immolation against Chinese rule in Tibet. Thupten Ngodup’s self-immolation on April 27, 1998 in Delhi, India marked the beginning of self-immolation as a form of political protest in Tibet’s history. Inside Tibet, since February 2009, 153 Tibetans have set themselves on fire: 126 men and 28 women. 26 of the total self-immolators were aged 18 or under.

Tamdin Tso (also called Tingzin) aged 23 self-immolated on 7 November 2012, leaving behind her parents and 6-year-old son. Her last words were: “Being a Tibetan is so difficult. We can’t even say our prayer to Dalai Lama’s portrait. We have no freedom at all.” Choepak Kyap (25) and Sonam (24) self-immolated on 19 April 2012 with their last words: “… After the Chinese occupation, Tibetans suffer without basic human rights… The suffering of Tibetans without basic human rights is far worse than the suffering that we endure when we set ourselves on fire.” A 43-year-old writer, Gudrup, from Nagchu county of Tibetan Autonomous Region self-immolated on 4 October 2012 leaving behind a note with the words: “His Holiness Dalai Lama advocates for a non-violent middle-way policy for the right to Tibetan autonomy. Six million Tibetans have been following His Holiness’ teaching. But the CCP shows no support. Instead, they arrested and tortured those who demand Tibetan’s rights.”

This year also marks the 10th anniversary of the 2008 Uprisings in Tibet which is one of the largest, wide-scale uprisings in Tibet since its occupation by China. The brutal clampdown on religious freedom and any form of expression of cultural identity led to the 2008 Tibet Uprising. The restrictions on observing sacred days such as Saga Dawa (full moon day- 15th day of the month), the forcible demolition of two statues of Guru Padmasambhava at Samye and Drachen monasteries, the enactment of Order no. 7 controlling the reincarnation of Tibetan Buddhist lamas, prohibition against celebration of the conferring of the US Congressional Gold Medal awarded on His Holiness the Dalai Lama, stepping up “anti-Dalai Lama” and “patriotic re-education” campaigns, forcing Tibetans who abstained from eating pork for a year as mark of reverence to His Holiness Dalai Lama to feed, kill, and eat pig, are only few instances of gross violations of human rights inevitably leading to the Uprisings.

Today, the situation in Tibet has only worsened. The repressive policies of the Communist Party of China is aimed at annihilation of Tibetan culture at the heart of which lies Tibetan Buddhism and Tibetan language. The demolition of the world’s largest Buddhist academy Larung Gar, and the arbitrary arrest and unfair trial of Tibetan language rights advocate Tashi Wangchuk evinces the intention of China’s Tibet policies that seek the assimilation of Tibetans and sinicization of Tibet.

The Freedom House in its 2018 report ranked Tibet as the second least free region in the world, marginally better than Syria and much worse than North Korea and Somalia. The UN Committee on the Elimination of Racial Discrimination (CERD) in its concluding observations adopted in August this year highlighted concerns about racial discrimination against Tibetans and highlighted the significant restrictions on the movement of Tibetans within and beyond Tibet Autonomous Region (TAR) as well as almost entire banning of issuance of passports to Tibetans for foreign travel. It also raised concerns about the restrictions on teaching of Tibetan language in schools and punishment for Tibetan language advocacy were also highlighted.

The European Parliament’s Intergroup on Freedom of Religion or Belief and Religious Tolerance in its 2018 report categorised China under “severe violations” group and ranked it amongst the worst violators in the world. The US State Department report on Human Rights Situation in Tibet, published in 2017 has also raised concerns about the gross human rights violations faced by Tibetans in Tibet.

China has time and again denied access to Tibet to many human rights advocates and institutions including the former UN high commissioner for human rights, Prince Zeid Raad Al Hussein. In a bid to promote access to Tibet for the US States officials, journalists, NGOs and its citizens, the US Congress unanimously passed the Reciprocal Access to Tibet Act. Just yesterday, the US President Donald Trump signed the bill into a law.

The very fact that the 17-year-old Bhenchen Kyi had to worry that her family would be deprived of her remains if she self-immolated in front of a government building and thereby decided to set herself on fire near her house, speaks volumes about the abysmal human rights situation inside Tibet. When Bhenchen Kyi, stood in middle of the field in her nomadic village, ready to set herself ablaze, it was not a cry of desperation, it was an expression of hope that her ultimate sacrifice will bring the attention of the world to the deplorable human rights situation in Tibet and the legitimate grievances of the Tibetan people. The 153 self-immolations are not cries of despair but acts of courage signalling the message of hope; hope that the world will realize that the Tibetans are also human beings who are entitled to all the rights enshrined in the UDHR, hope that the international community will stand by its commitments to UDHR.

The perennial values of equality, justice and human dignity which underpins the tenets of Universal Declaration of Human Rights are non-existent in Tibet under the Chinese occupation. But if you question whether UDHR is relevant for all Tibetans, the answer would be, “Yes, it is relevant.” It is relevant because UDHR represents the basic aspirations of the Tibetan people: restoration of freedom and pursuit of dignity.

The UN tagline for 70th anniversary of UDHR is “Stand Up for Human Rights” (#standup4humanrights). I think it is high time we all stand up for the human rights of Tibetans in Tibet and not let any more precious human lives go up in flames, unabated, on the roof of the world.

3  Article 4 of the Charter of Tibetans in Exile.