Sikyong urges Tibetans, friends worldwide to light a candle for Kunzik Panchen Rinpoche on 17 May

Dharamshala: As part of its monthlong campaign to mark the 25th anniversary of the enforced disappearance of the 11th Panchen Lama of Tibet, the Central Tibetan Administration is organising a virtual panel discussion and a global candlelight vigil to remember the Panchen Lama on the day of his disappearance.

“May 17 marks the 25th anniversary of Kunzik Panchen Rinpoche’s disappearance after His Holiness the Dalai Lama endorsed Gedhun Choekyi Nyima as the Panchen Lama who was nominated by the Tashi Lhunpo Monastery and especially through the committee formed by the Chinese government led by Chadrel Rinpoche,” Sikyong said as he announced the May 17 campaign.

One of the highest Tibetan spiritual leaders after the Dalai Lama, the Panchen Lama who was forcibly disappeared at the age of six turned 31 last month. The upcoming May 17 will mark 25th year of his enforced disappearance. He was abducted along with the rest of his family by the Chinese government on 17 May 1995, three days after he was recognised as the incarnation of the 10th Panchen Lama by His Holiness the Dalai Lama.

“It is very tragic and sad but we will not forget Kunzik Panchen Rinpoche and we will remember him till he is released and till he can be with the Tibetans to practise and become a great spiritual leader and great national leader as the 10th Panchen Lama,” said Sikyong.

On May 17, in observance of the 25th anniversary of the Panchen Lama’s disappearance, CTA will host a panel discussion at 7 pm and a global candlelight vigil to remember him.

“We urge Tibetans and friends all the world to light a candle to remember Kunzik Panchen Rinpoche and not to forget him and most importantly, to demand the Government of China to release him.”

Read the details of the campaign here: 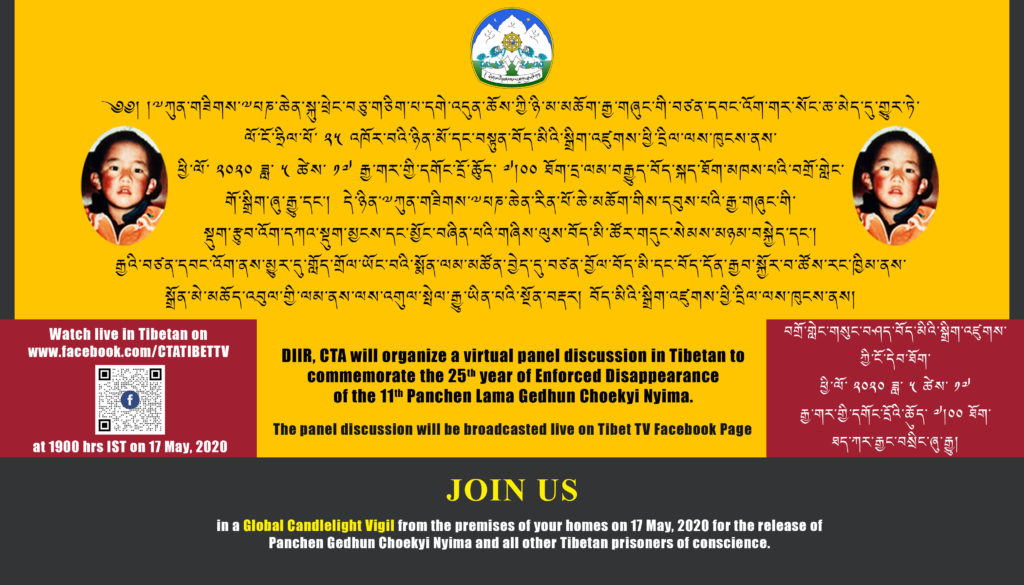