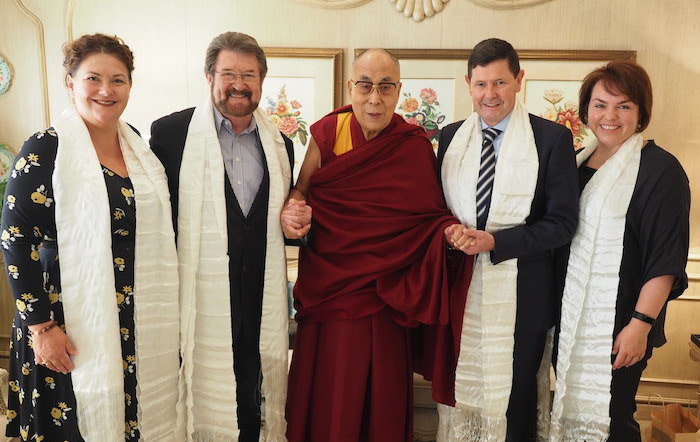 Senator Kimberley Kitching (first in the right) with His Holiness the Dalai Lama on 20 November 2017 in New Delhi. (File Image)

Dharamshala: Sikyong Penpa Tsering of the Central Tibetan Administration offered heartfelt condolences on the demise of Senator Kimberley Kitching, who passed away at the age of 52 on Thursday, Melbourne.

In his condolence message, Sikyong wrote, “with immense shock and deep sorrow, we learned of the sudden demise of Senator Kimberley Kitching, a forceful champion for human rights and freedom.”

“Senator Kimberley was a friend and ally of the Tibetan people as she was for the  millions of oppressed people worldwide. As a senator and a founder co-chair of IPAC,  she devoted her work to upholding democracy and human rights not only in Australia but globally. By steadfastly advocating for the passage of the Magnitsky Act and  committing to the cause of democracy, freedom and human rights of peoples worldwide in her brief but impactful term, Senator Kimberley has provided us with a role model of how all leaders should act.”

“Today we have lost a true friend, and we join with her family, friends and the people of  Australia in grieving her loss.”

“Once again, our heartfelt condolences and prayers.”