Roundtable discussion on human rights in ‘Xinjiang, Hong Kong, and Tibet’ by US Embassy in London 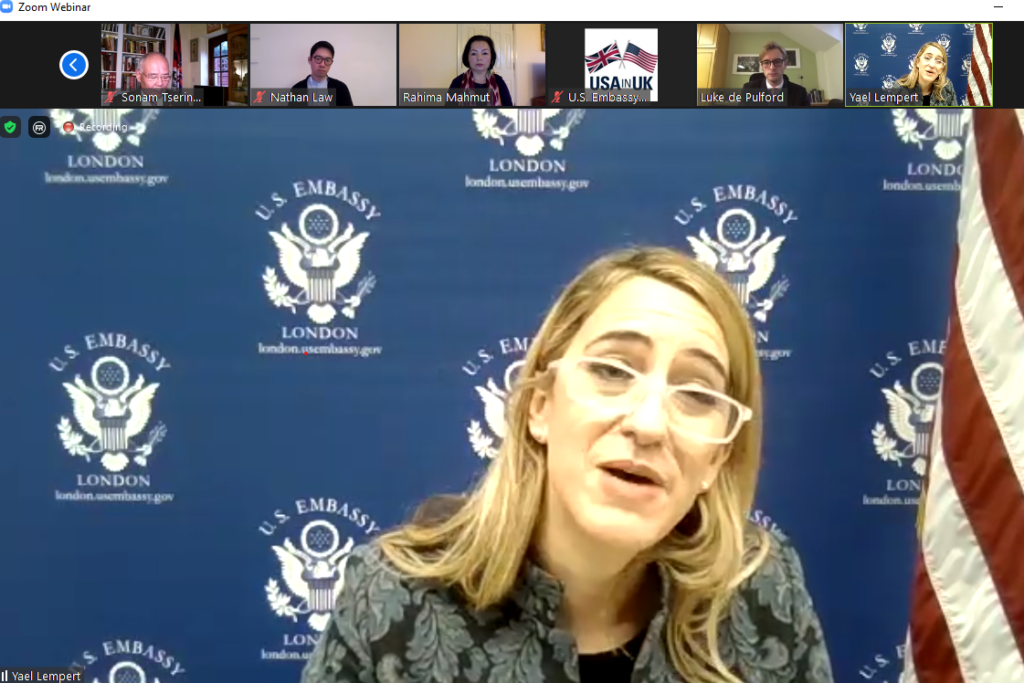 “Spotlight on Human Rights in Xinjiang, Hong Kong, and Tibet: A Comparative View”, the U.S. Embassy in London-organised round table discussion on World Human Rights Day.

The Deputy Chief of Mission at the U.S. Embassy, Ms. Yael Lempert in her opening remarks highlighted the importance of hosting this timely discussion on World Human Rights Day and also U.S serious concerns about the China’s Human Rights abuses in Xinjiang, Hong Kong and Tibet. Ms. Lempert thanked Luke and expressed gratitude to the eminent panelists, each an expert on their topic.

The three panelists expressed their views on human rights abuses across China in a moderated discussion and Q&A session with Mr. Luke de Pulford, Coordinator at the Inter-Parliamentary Alliance on China (IPAC). The hourlong discussion was insightful and informative. The Embassy had invited media to the event. The panelist received questions from editor of Independent, Telegraph and Guardian.

The common view expressed by the panelists was that the new President-elect Biden administration should adopt stronger policies against China’s human rights abuses and health related issues. Moderator Luke de Pulford also put his questions to the panelists.

Representative Mr. Sonam Tsering Frasi began his presentation by thanking the Deputy Chief of Mission and staffers at the US Embassy in London for inviting the Office of Tibet, London to participate in this important virtual event.

In his remarks, he said for more than sixty years now, the Tibetan people have been enduring unspeakable sufferings and injustices under the Chinese communist government. This includes denial of basic human rights such as freedom of religion, expression, Tibetan language and cultural expression, movement, and assembly.

“To understand why the Chinese communist party is cracking and denying the universal and Fundamental Human Rights in Tibet, originates from the fact that Tibet is illegally occupied by the CCP. If the International community do not change the CCP, the CCP will change the rest of the world to fit into their ideology of one-Party rule with no democracy and a new world order of no human rights, no religious freedom and no transparency,” he said.

The other two panelist include: Rahima Mahmut who is UK Project Director at the World Uyghur Congress and Advisor at the Inter-Parliamentary Alliance on China. She is a Uyghur singer, human rights activist, and award-winning translator of the poignant prison memoir The Land Drenched in Tears by Soyungul Chanisheff. Her latest work includes working as a consultant and translator for the 2019 ITV documentary Undercover: Inside China’s Digital Gulag, which won many major awards including a BAFTA TV and International Emmy on current affairs in 2020. Currently, she is the UK Project Director of the World Uyghur Congress and Advisor to the Inter-Parliamentary Alliance on China.

Nathan Law is a pro-democracy activist from Hong Kong. As a former student leader, he has been chairman of the Representative Council of the Lingnan University Students’ Union (LUSU), acting president of the LUSU, and secretary-general of the Hong Kong Federation of Students (HKFS). He was one of the student leaders during the 79-day Umbrella Movement in 2014. He is the founding and former chairman of Demosisto, a new political party derived from the 2014 protests.