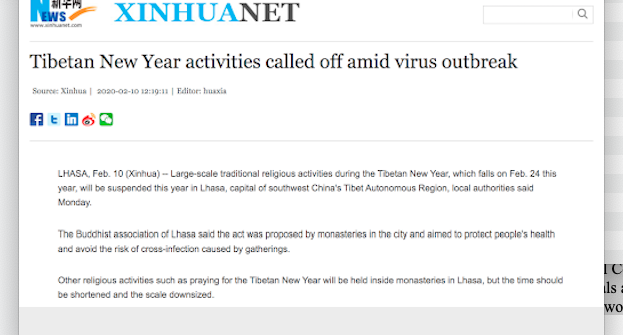 Screenshot of CCP mouthpiece, Xinhua.net’s report on the suspension of religious activities during the Tibetan new year.

Days ahead of the upcoming Losar, the Tibetan new year, which starts next week from 24 February, the Chinese authorities in Tibetan regions have increased restrictions on the daily lives of the Tibetans due to the ongoing spread of novel coronavirus and “risk of cross-infection”. The authorities are using the outbreak of the epidemic to propagate party’s drive to enhance “party’s stability” and “social stability maintenance”.

The ongoing spread of novel coronavirus that broke out from China’s Wuhan city in December last year has shaken the world with sudden panic.

The COVD-19 outbreak was declared a “public health emergency of international concern” by the World Health Organisation inviting urgent cooperation from China to prevent the global crisis. Adversely, the Chinese government has responded with extended repressive measures that severely infringe the freedoms and rights of peoples, including Tibetans.

Using coronavirus to further its crackdown on Tibetan’s religious freedom by the Chinese authorities in Tibet is outrageous but not surprising. These restrictions amid the coronavirus outbreak are evident from several Chinese media reports.

The monasteries in Tibet’s capital Lhasa are strictly cut off from engaging in religious presiding, with traditional religious activities “suspended” during Losar this year, the CCP mouth-piece Xinhua reported last week.

On 8 February, the Ethnic and Religious Affairs Bureau of Sershul (Ch: Shiqu) county, Kardze (Ch: Ganzi) Tibetan Autonomous Prefecture released a circular wherein the Chinese officials strictly warned Tibetan monks against allowing any lay Tibetans in the monasteries while restricting the monks from going outside their residents. The Sershul County authorities also banned Tibetan monks from performing any religious rituals and prayers during the upcoming Losar. Failing to abide by the order, the monasteries would face closure, warned the circular in Tibetan. 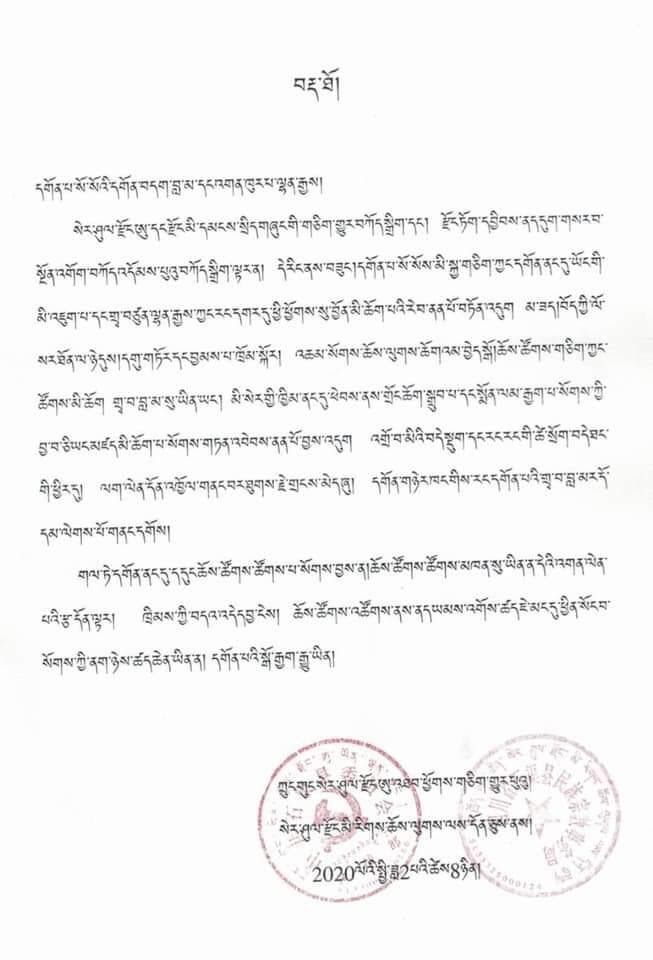 A copy of the circular issued by the Sershul County authorities against Tibetans monasteries.

“The Tibetan Losar is a festivity deeply rooted in the Tibetan Buddhist culture and tradition, celebrated for days. Losar days are lined with religious proceedings from praying, visiting temples and holy sites to offering of Sangsol (a community activity of incense burning) and more. Banning and depriving the Tibetans in Tibet of such religious activities during Losar takes away the whole sense of Losar, not to mention depriving them of their religious and cultural rights,” according to Dukthen Kyi, Human Rights Desk.

Chinese authorities in Tibet continue to violate freedom of speech, especially amid the spread of the deadly virus. They implemented further crackdown on online discussions of coronavirus with an alarming number of infected people and death toll.

Arrests and detentions of people who have discussed online about the virus were also reported. A February 6 report by the Chinese media People’s Daily stated that authorities have detained seven people in Tibet’s Chamdo Prefecture for “spreading the rumours” about the coronavirus. No details were given about who these seven were or whether they are all Tibetans. 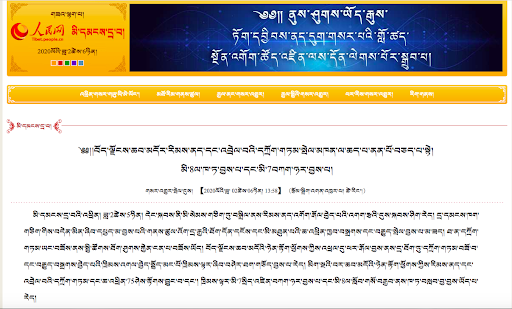 Screenshot of the People’s Daily news on the arrest of seven people in Chamdo.

During this emergency state, it is ever more significant for China to combat and control the coronavirus spread while respecting free speech and other basic human rights of all. However, the whistle-blower Li Wenliang, a Chinese doctor who tried to raise the alarm over the coronavirus, was interrogated by the Chinese authorities and warned for “spreading false rumours” and “disrupting social order”. Doctor Li later died after being infected with COVD-19 arousing much grieve and protests by Chinese netizens.

A similar health crisis happened in 2003 when China experienced SARS (Severe Acute Respiratory Syndrome) epidemic and the Chinese authorities covered up the disease for months before a 72-year-old doctor named Jiang Yanyong exposed the health crisis.

“The country could have contained the spread of the epidemic if proper attention was given to the early warnings,” said Tenzin Dhadon, Human Rights Desk staff. “This shows that China has not learned from its past experience. Unless the Chinese government encourage and truly respect free speech, predicaments are bound to repeat. Health disaster such as the COVD-19 will go to great magnitude if the Chinese government continue to thwart the basic freedom of its people.”