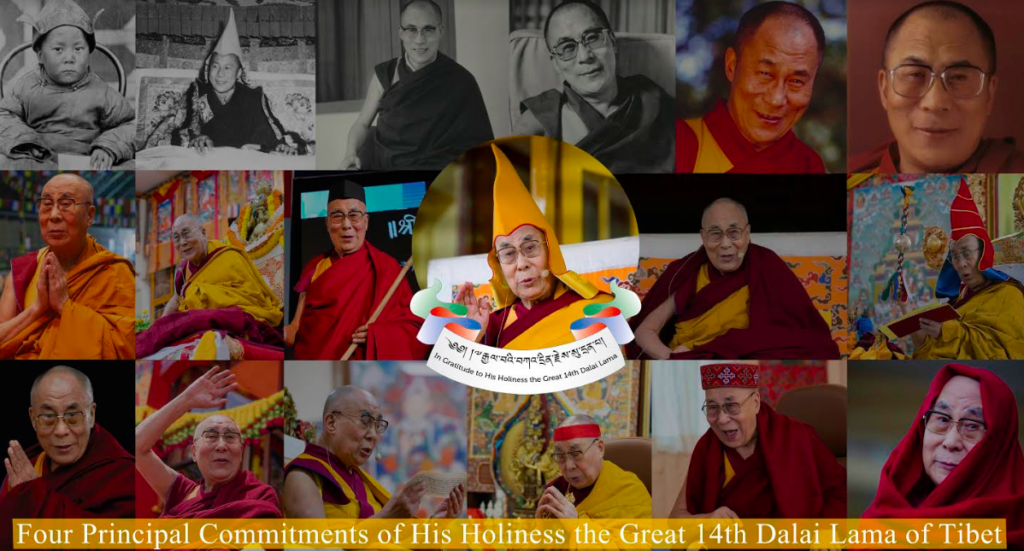 The event celebrating His Holiness’ life-long legacy and commitment was participated by not less than 125 speakers from around the world, in 15 different languages, which highlighted the four principal commitments of His Holiness the Dalai Lama namely: Promotion of Human Values, Promotion of Religious Harmony, Preservation of Tibet’s Culture and Environment, and Revival of Ancient Indian Wisdom.

Participants ranged from the spiritual heads of the major Tibetan Buddhist institutions to prominent experts, academicians, and authors.

Sikyong Dr Lobsang Sangay opened the week-long talk series with an illuminative description of the four core commitments. He described each commitment as a roadmap to building individual, societal, and global peace and happiness. He called on everyone to contribute to these principal commitments of His Holiness the Dalai Lama.

The inauguration ceremony also featured an in-depth introduction on the core commitments by Yangten Tulku Rinpoche, Religious Secretary at the Office of His Holiness the Dalai Lama, who pointed out that these can be considered “an innovation in the educational sphere and the psychological field”.

The first panel of the talk series featured Dr Thupten Jinpa, Kalon Ven Karma Gelek Yuthok, Geshe Lhakdor, and Geshe Ngawang Samten each discussing the key aspects and contents of the four life-long commitments of His Holiness the Dalai Lama.

Speaking on the promotion of religious harmony, Ven Karma Gelek Yuthok, Kalon for Department of Religion and Culture, CTA stressed that religious harmony must go beyond forming diplomatic religious relations and friendship.

Geshe Lhakdor, Director, Library of Tibetan Works and Archives (LTWA) raised awareness on the urgent need for a strategic approach for the preservation of the Tibetan language.

Commenting on the fourth and final commitment of His Holiness the Dalai Lama- Revival of ancient Indian wisdom, Geshe Ngawang Samten, Vice-Chancellor of Central Institute of Higher Tibetan Studies (CIHTS), Sarnath pointed out the relevance of ancient Indian knowledge as more than a study of religion which is capable of contributing significantly to the well being of human beings.

On the third day of the talk series, the spiritual heads of the major Tibetan Buddhist traditions delivered their respective addresses on the four commitments, interpreting those and outlining their significance for the audience.

Kyabje Gaden Tripa Rinpoche, the head of Gelug school of Tibetan Buddhism, underlined the importance of followers to study, reflect and practice the teachings of His Holiness the Dalai Lama.

Gyalwang Karmapa Rinpoche, head of Kagyu school of Tibetan Buddhism, said that young or old, lay or monastic, each must, without exceptions, to their best of ability serve the betterment of Tibetan culture, Buddhism and identity.

Kyabje Shechen Rabjam Rinpoche, head of Shechen Monastery of Nyingma School of Buddhism, traced the spread of Tibetan Buddhism globally from being virtually unknown to the stature it has achieved crediting His Holiness efforts for shaping global perception. He also shared personal reflections of His Holiness the Dalai Lama.

Kyabje Jonang Gyaltsab Rinpoche, the head of Jonang school of Tibetan Buddhism, offered the four commitment as a sacred Buddhist aspiration motivated by the infinite compassionate will to relieve all beings from suffering.

Rajiv Mehrotra, Secretary and Trustee of the Foundation for Universal Responsibility of His Holiness the Dalai Lama (FURHHDL), Dr. Anthony Goedhals, author and lecturer at the University of Pretoria, South Africa, Tony Steel, former President, Dalai Lama in Australia Organising Committee and Bob Thurman, American Buddhist author and academician were the keynote speakers for the fourth panel.

Having discussed each commitment analytically, the speakers mutually declared that His Holiness’s core commitment is scientific, practical, and universally applicable.

The fifth-day panel of the marathon talk-series includes Dr. Lobsang Tenzin Negi, Executive Director of the Center for Contemplative Science and Compassion at Emory University, Jetsunma Tenzin Palmo, Founder, and Director of Dongyu Gasal Ling Nunnery, Gabriel Lafitte, Scholar, and researcher on Tibet’s environment, and Prof. John Powers of Asian studies and Buddhism. Each shared their own take on His Holiness approach toward his core commitments and came to the conclusion that His Holiness’s sincere care for global peace and harmony, his promotion of universal responsibility, and his ability to think long term for the environment are precious gifts to humanity.

The speakers noted that the approach and technique adopted by His Holiness involve profound compassion, tolerance, and the value of thinking for others.

The seventh day of the panel highlighted the pragmatism in the core commitments of His Holiness the Dalai Lama as the speakers went on to discuss the commitments individually based on their own experience.

Lhamo, a Tibetan Buddhist nun at Janchup Choeling Nunnery said that His Holiness’s commitment to promoting human values is actually finding a way for spirituality and ethics that is dissociated from religion. She insisted that acting on the values of secular ethics is the only way to promote them rather than just gaining knowledge and understanding about it.

Social activist Guy Lieberman who is also the facilitator of meetings between His Holiness the Dalai Lama and Nelson Mandela in 1996 and 2004 said that His Holiness reflects harmony not just in the religious aspect but with multiple others like secular society, science, and governance. He calls His Holiness ‘fearless’ and ‘extraordinary broad-minded’.

Geshe Namdak, a teacher at Jamyang Buddhist Centre in London called out the western countries to hold India as the guiding example to build religious harmony in the western community and to promote it by hosting more inter-faith conferences.

Sharon Salzberg, meditation pioneer, and industry leader underlined the implications associated with happiness. She asserted that the inner source is true happiness and the rest are superficial and the more people come to terms with this, the more love and compassion they will have to offer.

The speakers talked about the need for a revolutionary to move beyond tribular values to promote ethical values. They insisted to recognise and respect the values of other religions and uphold diversity rather than dwelling on the philosophical and traditional differences.

Never in the history has CTA-hosted events seen so many distinguished speakers from around the world speaking on a topic in 15 languages as witnessed this year at the weeklong pre-recorded talk series under the initiative of DIIR to honour and celebrate the 85 glorious years that His Holiness the Dalai Lama has spent and continues to spend in the service of the well being of all sentient beings.