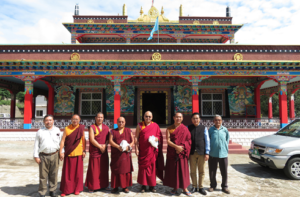 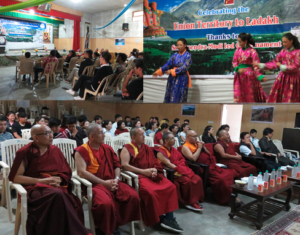 Parliamentarians at the celebration of Ladakh on becoming UT.

They were warmly received by the Settlement Officer, Chairman of Local Tibetan Assembly, President of Tibetan Freedom Movement, Secretary of Tibetan Cooperative, representatives of monasteries, STS Principal, Administrator of the hospital, NGOs and camp leaders of the settlement at Kollegal on 18th August.

On 20th August, they visited Sambhota Tibetan School and addressed teachers, staff and students on the importance of education, four commitments of His Holiness the 14th Dalai Lama, the situation of Tibetans in and outside of Tibet, the importance of learning both traditional and modern education, and health. They also advised teachers and staff of the school to work with altruistic intention and toured around the premises of the school.

On 21st August, Parliamentarians addressed a gathering of more than 300 people at the hall of Tibetan Cooperative, Kollegal. Parliamentarians addressed on the kindness of His Holiness the 14th Dalai Lama, the morality of Tibetans, the importance of staying united, Middle Way Policy to resolve the issue of Tibet, international status and support on Tibet’s issue, current status and changes in the status of Tibet and China. They answered questions asked by the public and clarified their doubts. 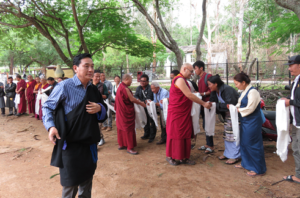 Parliamentarians being welcomed at Kollegal.

They further held a meeting with the Settlement Officer and staff of Settlement office; Chairman, Vice Chairman and members of Local Tibetan Assembly; President and members of Regional Tibetan Freedom Movement (BRDL); Vice President of Tibetan Cooperative; STS Principal; Heads of the two hospitals, and village leaders of the 22 villages to discuss about the problems faced by the people of settlement and other matters. 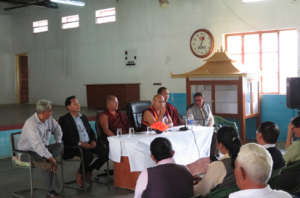 In the meeting Parliamentarian, Kunga Sotop addressed on kindness and support of His Holiness the 14th Dalai Lama and the Indian government to the Tibetans, importance of preserving good virtues of Tibetan people, the importance of staying united and importance of following laws of the country. While Parliamentarian Khenpo Sonam Tenphel among other things talked about the businesses of the 7th Session of the 16th Tibetan Parliament-in-Exile. They answered questions asked by the public.

On 23rd August, the Parliamentarians reached Kodaikanal, which has 30 Tibetan shops and 2 Tibetan restaurants. In their last visitation site, they visited all the Tibetans shops and later in the evening held a meeting with all the Tibetans living there. 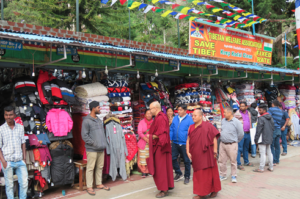 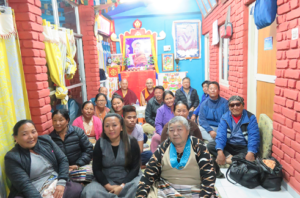