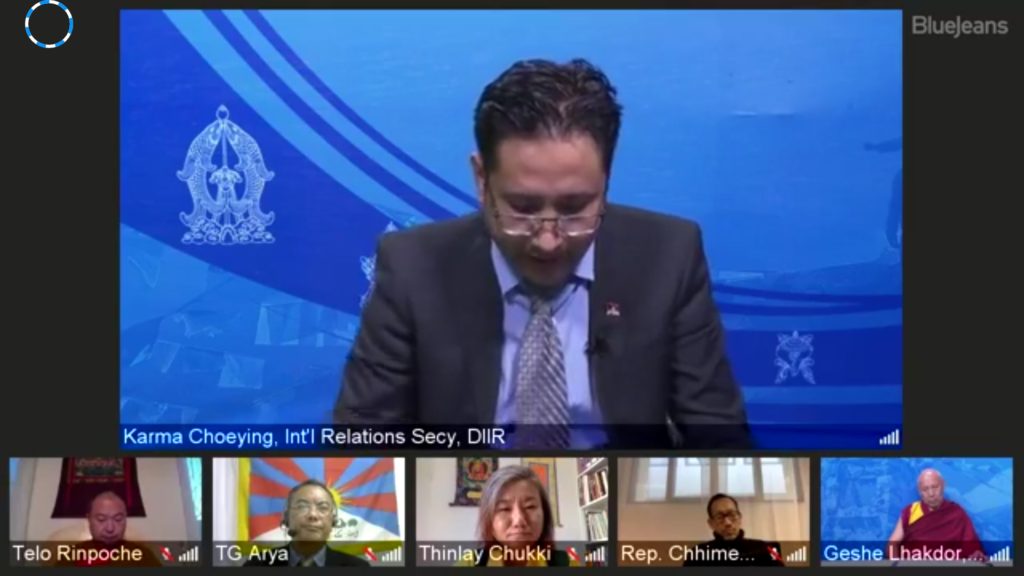 Geneva: In the 70 year-long occupation of Tibet, the Chinese Communist Party has consistently employed policies targetting systematic sinicisation of Tibetan Buddhism that is central to Tibetan cultural identity. Beginning from the cultural revolution under Mao Zedong that saw an unprecedented attack on Tibetan monasteries, sacred texts, scriptures preserved over centuries and the disrobing of tens of thousand monks and nuns that remains the darkest times in Tibetan memories, under Xi Jinping, a second cultural revolution is being waged against the Tibetan Buddhism.

The CPC has since 2007 formulated a measure called Order no. 5 requiring other all reincarnate monks to register for government approval. For decades, it has been attempting to build a semblance of the right to choose the reincarnation of the 14th Dalai Lama.

Ironically for an atheist government, it has gone to extraordinary lengths to try to control the reincarnation process which is deeply rooted in sacred centuries-old Buddhist beliefs.

A panel of Buddhist masters, experts explain why.

Secretary Choeying compared China’s dubious claims of authority over Tibetan Buddhism to that of a wolf-assigned to look after sheep. ‘The system of reincarnation is a distinct part of Tibetan Buddhist practice and China has absolutely no authority whatsoever’, he said. 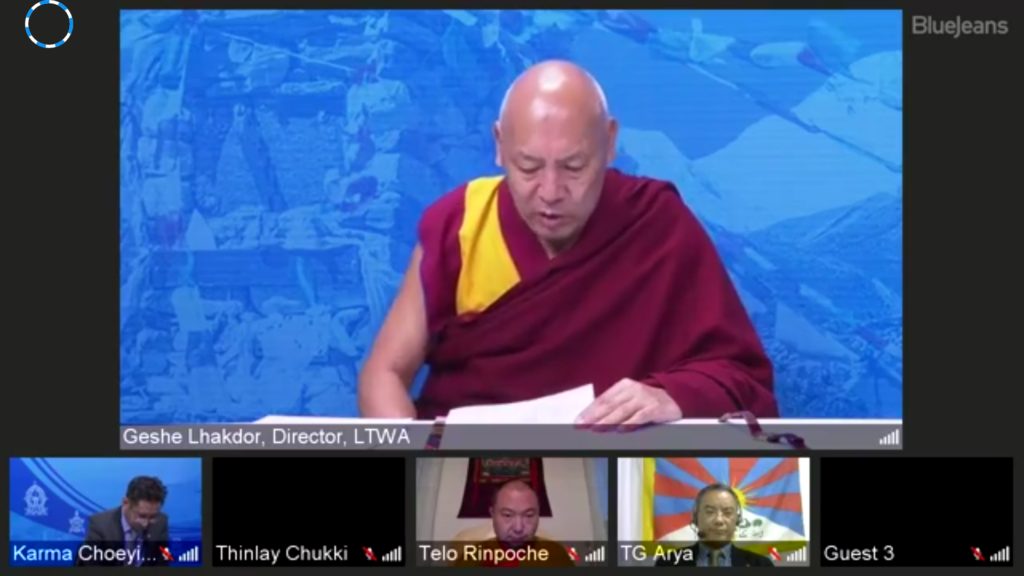 Geshe Lhakdor, Director of Library of Tibetan Works and Archives, spoke from a Buddhist view on the system of reincarnation. Screengrab image

Renowned Buddhist scholar Geshe Lhakdor also the Director of Library of Tibetan Works and Archives enumerated the list of terms meaning reincarnation, rinpoche, emanation body, young life, lama’s emanation, etc which originated in the 12th century, marking the first reincarnates across various sects including female reincarnations that spread to Mongol, Bhutan as well. Enlightenment or Nirvana lies at the core of Buddhism, freedom for the cycle of rebirth and death that was adapted by Tibetans to add the identified lineage of rebirths called ‘tulkus’.

He said that though the traditions of reincarnation might have originated for political and economic advantages, at its essence, it draws from the idea that great spiritual practitioners are reborn voluntarily to help those stuck in the cycles of suffering distinct from ordinary rebirths that are compelled by the force of past negative actions. He emphasised that the issue of reincarnation was tied inextricably with Tibetan Buddhism, derived from Buddha’s 8000 verses sutra that talks about form body and truth body and in Nagarjuna’s Ratnavali that focuses on the various bodies of Buddha and higher being among others.

‘China’s attempts to interfere in the Dalai Lama’s succession is inspired by Sun Tzu’s playbook,’ Geshe observed. It is aimed at instilling domestic patriotism by targeting an outside enemy and keep the enemy distracted and entrap them.

“China’s two criteria for the selection requires that candidate must be from within China to eliminate and CCP’s approval” belies its real agenda to gain control over the practice of Tibetan Buddhist’s revered institutions.

Reincarnation for China to control is ironic seeing its pronounced atheism, he said, adding that the international community and leaders of the free world do not trust the words of the Chinese government. 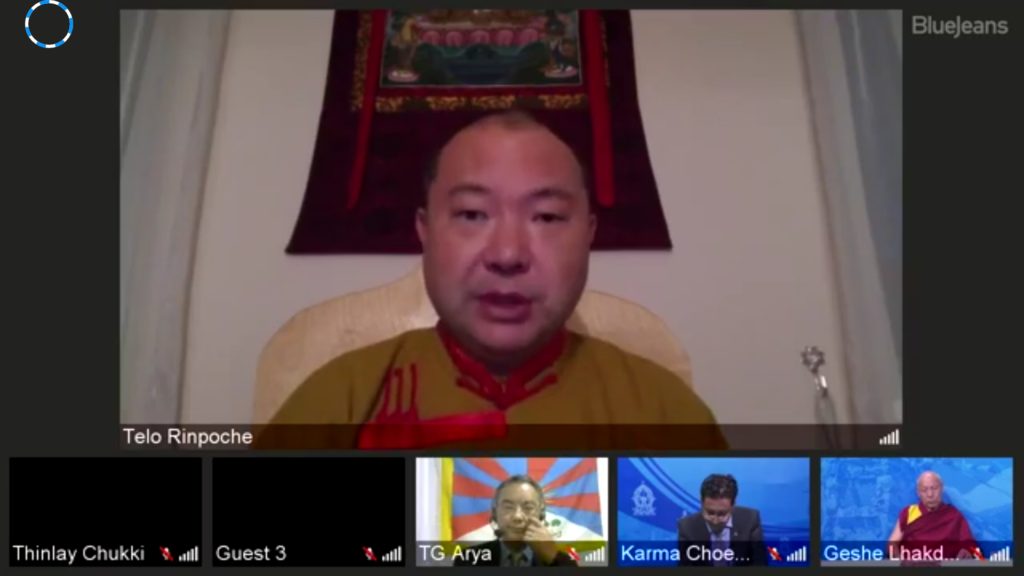 Telo Tulku Rinpoche, Representative, Office of Tibet-Moscow, spoke from a Mongolian perspective on the system of reincarnation.

Telo Tulku Rinpoche, Representative, Office of Tibet-Moscow, spoke about Mongolian view on the system of reincarnation.

Reincarnation originated in Mongolian late in the 17th century that is derived from the Tibetan system in terms of the temporal and political role of the reincarnated figure. Reincarnated lamas in Mongolia is much smaller compared to Tibetans exceeding thousands while in Mongol it is less than half and depends on recognition from Tibetan spiritual lamas, the Dalai Lama, the Panchen Lama or Lama of the tradition that they follow.

“Mongolians follow the guidelines, approval, advice of His Holiness the Dalai Lama,” he asserted, citing the example of the death of the 9th Jetsun Dhampa who was selected by His Holiness in his later years and who Mongolians accepted due to his identification by His Holiness while noting the following visit of the Chinese officials threatening the institute that His Holiness should not involve in the reincarnation process.

Due to which the 10th Jetsun Dhampa could not be recognised as approval from His Holiness is required for people’s acceptance, he said.

Chinese has since begun working on the renovation of a temple connected to previous incarnations of Jetsun Dhampa and are expected to appoint a successor showing China’s expanding control of religion into other countries.

He called China’s interference in Tibet and Mongol ‘illogical’ and expressed strongly that Mongolia would not recognise it as valid.

Adding further that it stood with Tibet and would not submit to China’s bullying. 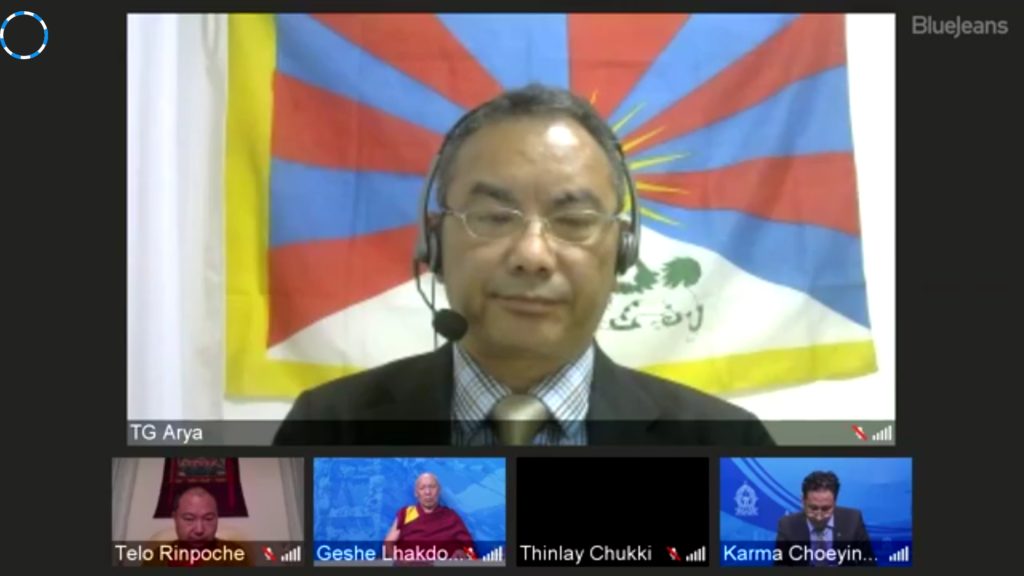 Dr Tsewang Gyalpo Arya, Representative, Office of Tibet- Tokyo analysed the political aspect of the system of reincarnation and why China wants to control and claim over the right to select the reincarnation of Dalai Lamas.

He explained the introduction of Buddhism in Tibet through the Indian masters like Padma Sambhava and Shantarakshita, after which Buddhism became a state religion that greatly influenced the political aspect of Tibetan society.

Buddhism soon transformed the once belligerent and ferocious Tibetan warriors into peace-loving. Soon enough, monasteries replaced the armies barracks and monks and nuns replaced the warriors. System of reincarnation in Tibet was first formalised when the first reincarnation of Karmapa Dusum Khenpa who died in 1193 was recognised in 1205. Thereafter, other major religious schools started recognition of their own lamas.

“The state was governed as per the religious law. Religion and faith became the guiding force in the day to day lives of the people. The Mongols, Manchus, Nepal, and the Chinese respected and revered the Tibetan lamas as they helped maintain peace and harmony in the region” he said explaining the extent of religious influence in Tibet where the state of conduct is influenced by the teachings of Buddha.

To explain why China wants to control Buddhism and the system of reincarnation, the Representative underlined a series of Chinese communist’s failed policy to claim control over Tibetan Buddhism.

Despite large scale destructions of monasteries and disrobing of monks and nuns, he argued that CCP failed to diminish the devotion of the Tibetans. They then used the 17 point agreement to justify its illegal occupation of Tibet to suggest that it has liberated Tibet from feudal serfdom and that it has transformed Tibet into a socialist paradise where the Tibetans are happy under the communist rule. The ground report, however, tells otherwise.

“When China realised that repression, indoctrination and incarceration for all these years failed to wipe out the Tibetan identity. They realised that the root cause of its failed policy lies in the Tibetan religious culture and deep respect the Tibetans have for high reincarnated lamas and that’s when they sought for total control over reincarnation system’, asserts Representative Arya.

Representative further spoke on China’s growing interference in the reincarnation of the 14th Dalai Lama.

While China calls out names for His Holiness, they have equally shown keen interests in the reincarnation of Dalai Lama and constantly meddled in the issue of Dalai Lama’s reincarnation. The reason being, His Holiness is the sole foundation and the unifying force of Tibetan unity, struggle, resilience and China wants to control the highest seat of Tibetan Buddhism as they see it as an obstacle to their totalitarian communist rule.

“The Chinese claim has no basis and no truth as the selection of the Dalai Lama’s have been based on an age-old Tibetan religious tradition” he adds and condemns CCP for violating the domestic and international law by interfering in the selection of the reincarnation. He asserts that by doing so, China is violating its own constitutional law article 36 which allows people the freedom to practise religion without interruption.

Representative further points out that even if China usees the 17 point agreement as a justification to claim its control over Tibet it is blatantly violating the 4th and 7th clause mentioned in the agreement which clearly states China will not interfere in the authority of the Dalai Lama and that Tibetans shall have religious freedom. In addition, China is also violating article 18 of the UNHRD which mandates the protection of religious freedom under international law.

Representative concludes the Chinese leadership could easily be sued for violating the international code of law. Reincarnation is a personal matter of the Tibetan Buddhists and no one but the person who reincarnates has the sole authority over time and place of the rebirth.

“His Holiness has issued his own statement on his reincarnation, an instruction that his reincarnation will be recognised through the traditional Tibetan Buddhist system and that no recognition should be given to a candidate chosen illegitimately especially someone chosen for political ends”. 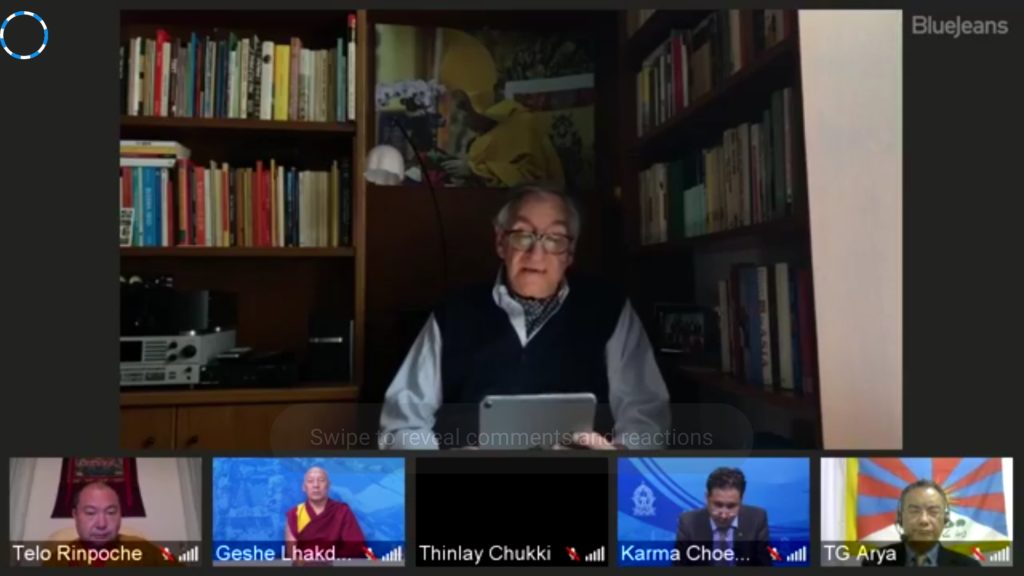 Pierno Verni, Author and Founding President of Heritage of Tibet underlines the general overview of the reincarnation and tulku system in Tibet.

Pierno Verni, Author and Founding President of Heritage of Tibet underlined the general overview of the reincarnation and tulku system in Tibet to illustrate that the reincarnation tradition existed in Tibet way before the Chinese invasion.

He explains that any statements made by His Holiness the Dalai Lama on his reincarnation are criticised by the CCP as the latter considers the reincarnation-related issue a political matter of their own and do not tolerate any kinds of interference.

“This alone should be enough to explain just how essential for the future of Tibet its entire civilization are the figures known as tulkus and reincarnated lamas,” says Verni.

Condemning China’s order no 5 policy, the President of Heritage of Tibet attested it was a deliberate move to control the belief system of the Tibetan people.

“It is clear from the policy that it is a deliberated intention of CCP to control and repress Tibetan Buddhism, and religious tradition which is an unacceptable violation of their rights to practise of religion” he adds.

He points out the seriousness and grave consequences of China’s meddling in the reincarnation of Dalai Lamas calling it preemptive move by the government to control the situation when His Holiness the Dalai Lama leaves the present body and expresses that such a situation shall be prevented if the international community pressurizes China to uphold religious freedom.

As a first step towards such action, the PRC must first revert its policy and allow the Tibetan people the right to their religious choice.