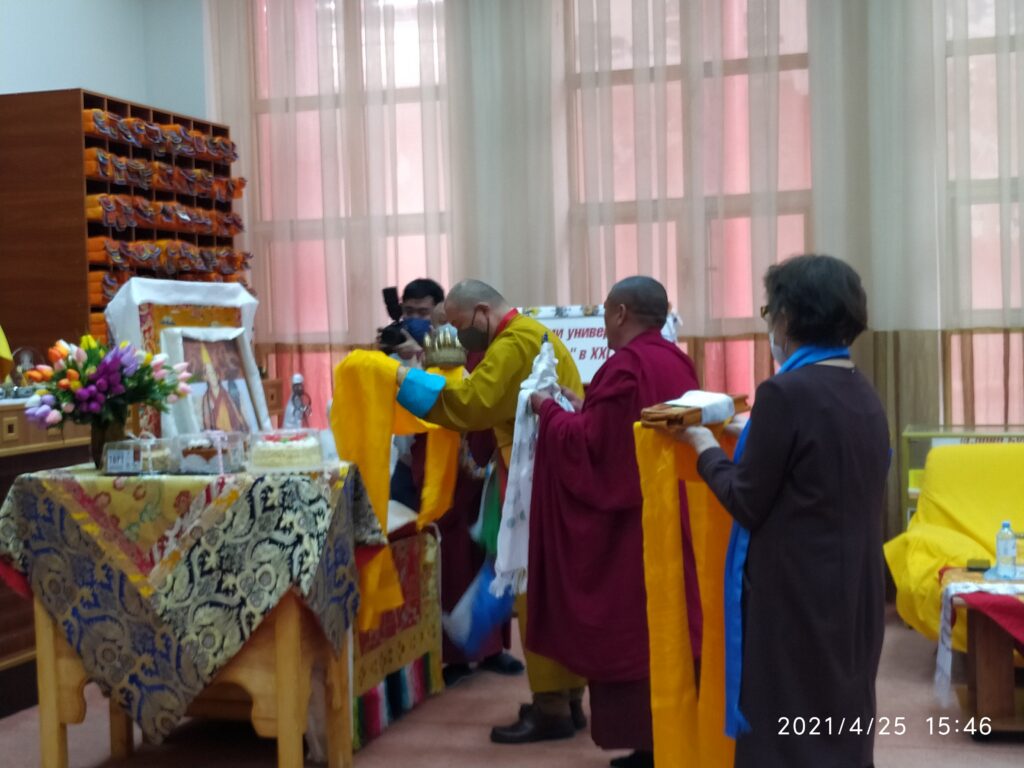 The Head of the Buddhists of Kalmykia, and former Honorary representative of His Holiness the Dalai Lama in Russia, Mongolia and the CIS countries, Telo Tulku Rinpoche making offerings.

Moscow, Russia: The Friends of Tibet communities across the Russian Federation, Ukraine, and Kazakhstan were celebrating the birthday of the 11th Panchen Lama Gedun Chokyi Nyima. Usually, a birthday celebration is an occasion for joy.  However, for all the Buddhist world, this is not the case, as the whereabouts of the 11th Panchen Lama are not known since the Chinese Government forcibly abducted him twenty-six years ago. Therefore, although today his 32nd birthday is celebrated across the world, there are dual feelings of joy and sadness.

The 11th Panchen Lama Gendun Chokyi Nyima was born on April 25, 1989 in Lhari County, Tibet. On May 14, 1995, the Dalai Lama XIV made an official statement and named the new reincarnation of the 1st Panchen Lama, a six-year-old boy named Gendun Chokyi Nyima. Three days later, on May 17, the little lama and his parents disappeared without a trace.

Since 1995, the Chinese government has withheld information about the fate of the Panchen Lama, despite repeated requests and statements about Gendun Chokyi Nyima made by the world public and political leaders. The Chinese leadership has made an immoral substitution by giving another boy to the Tibetan people, and the location of the true Panchen Lama is kept secret. By a UN resolution, he was recognized as the youngest political prisoner in the world. The fate of the true Panchen Lama and his family is still unknown.

The head of the Buddhists of Kalmykia, and former Honorary representative of His Holiness the Dalai Lama in Russia, Mongolia, and the CIS countries, Telo Tulku Rinpoche, told the Kalmyk Republic audience the story of the Panchen Lama, revealed the significance of this person for the Tibetan Buddhist community and reminded the history of the Panchen and Dalai Lamas, which is sad and complex. Tibetans consider the Dalai Lama supreme in temporal and spiritual matters but the Panchen Lama is also considered supreme in spiritual matters. This has been a source of conflict. Both are considered emanations of bodhisattvas, beings who have chosen repeated reincarnation until all sentient beings have achieved nirvana.

True Buddhists believe that His Holiness the Dalai Lama, who is now 85, will be reincarnated when he dies, the same being, faithful belief, that has been reincarnated for more than 600 years.

Traditionally, the Dalai Lama himself gives instructions before he dies. He’s supposed to tell ideas where to look for a child who will next embody his essence. But this time, with the involvement of Chinese politics the His Holiness’s next reincarnation may complicate the search.

What happened to the Panchen Lama should alert us and make us think about how well we, the followers of true Buddhism, are prepared for such a case. How can we protect the future reincarnation of our spiritual leader, the Dalai Lama?

The Shadjin Lama of Kalmyk Republic, Telo Tulku Rinpoche, also told that there are relics found on the territory of Kalmykia, that confirm the fact of the deep connection of the Kalmyk people with the line of Panchen Lamas of Tibet, in the form of letters and special instructions embroidered on the silk fabric, with the seal of the 6th Panchen Lama. The Kalmyk Central Khurul administration plans to organize an exhibition dedicated to the Panchen Lamas Institute, such an exhibition is necessary in order to remind both our peoples of their close connection.

On behalf of the Society of Friends of Tibet of the Republic of Kalmykia, Antonina Kookuyeva delivered a welcome address. She told the audience a brief story about the 11th Panchen Lama of Tibet.

On April 25, members of the “Friends of Tibet in Ukraine” held a public event dedicated to the birthday of H. H. Panchen Lama, Gedun Chokya Nima, in the format of a picket in front of the Chinese Embassy in Odesa.

In honor of the birthday of Panchen Lama XI, the members of the Friends of Tibet community of Saint Petersburg lit 108 oil lamps, handmade by the elder generation of the community, and offered prayers.

Also, prayers and well-wishes for Panchen Lama, Gedun Chokya Nima, were held in Moscow at Tibet Culture & Information Center by the members of the Tibet community of Moscow.

Members of the Tibetan community of Buryatia, with the participation of scientists from the Buryat Scientific Center of the Russian Academy of Sciences, held a prayer service at the Tibetan center of the Buddha of Medicine in Ulan Ude.

People came to the meditation center “Buddha Shakyamuni” in Novosibirsk to celebrate the 32nd Birthday of Panchen Lama 11th Gendun Choekyi Nyima. In a very quiet and warmhearted ambiance people prayed and meditated following with reading of the great text, composed by the First Panchen Lama Lobsang Choekyi Gyaltsen ” The main Path of all victorious ones, the Mahamudra”. All the merits of these virtuous actions were dedicated to the Love, Compassion, and Bodhichitta of all sentient beings. 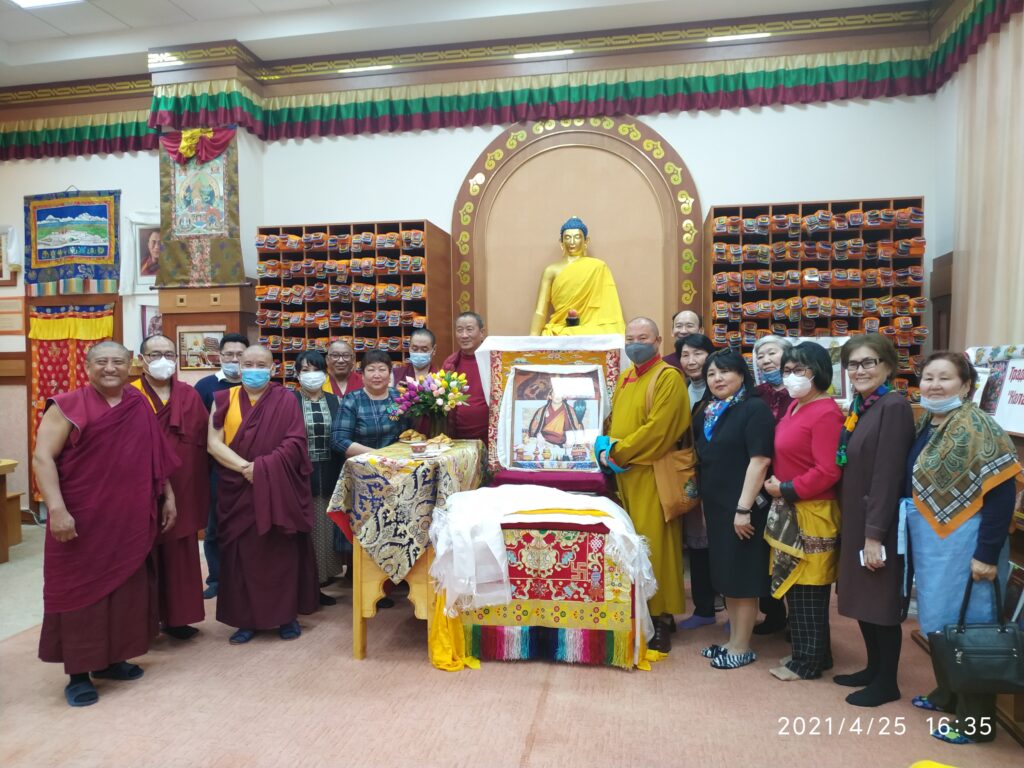 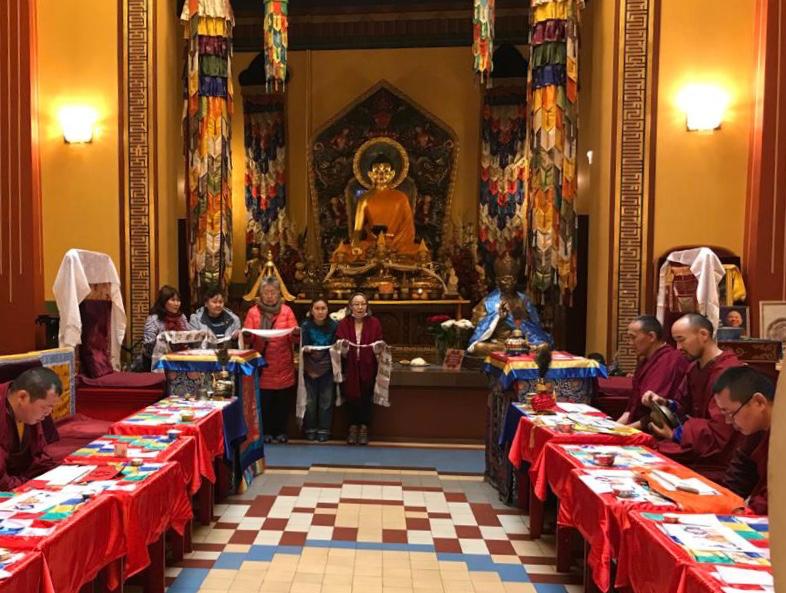 Members of the Friends of Tibet community of Saint Petersburg and Buddhist monks of Datsan Gunzechoinei praying for Panchen lama. 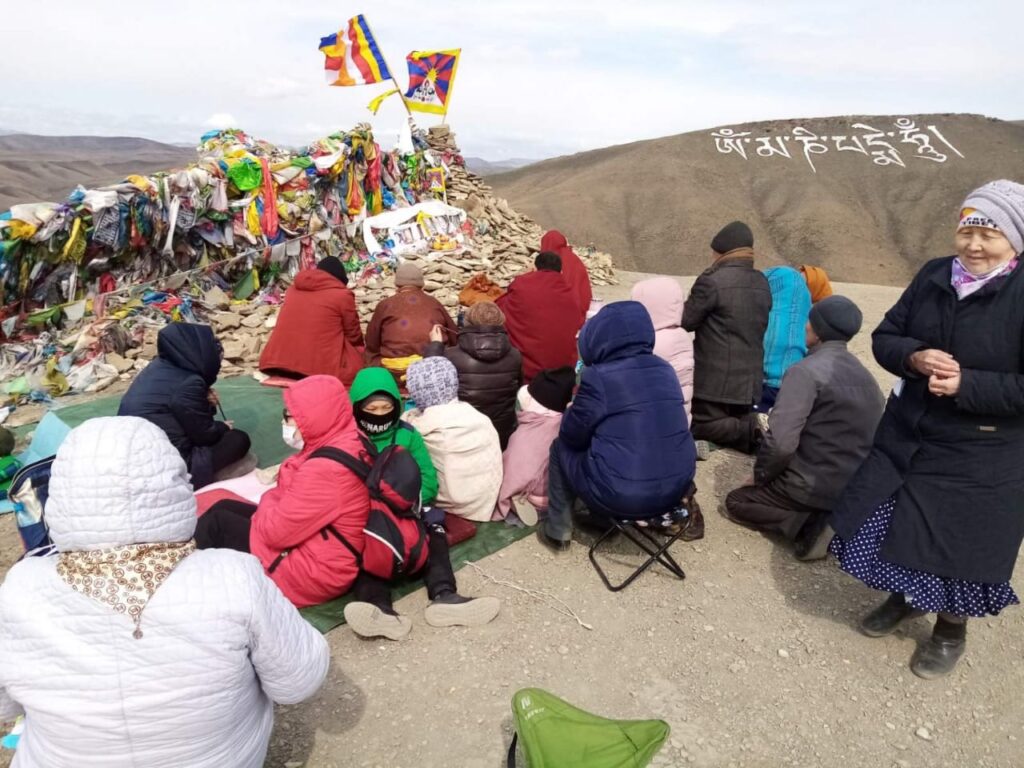 Members of Friends of Tibet Tyva praying for Panchen Lama on the sacred mount. 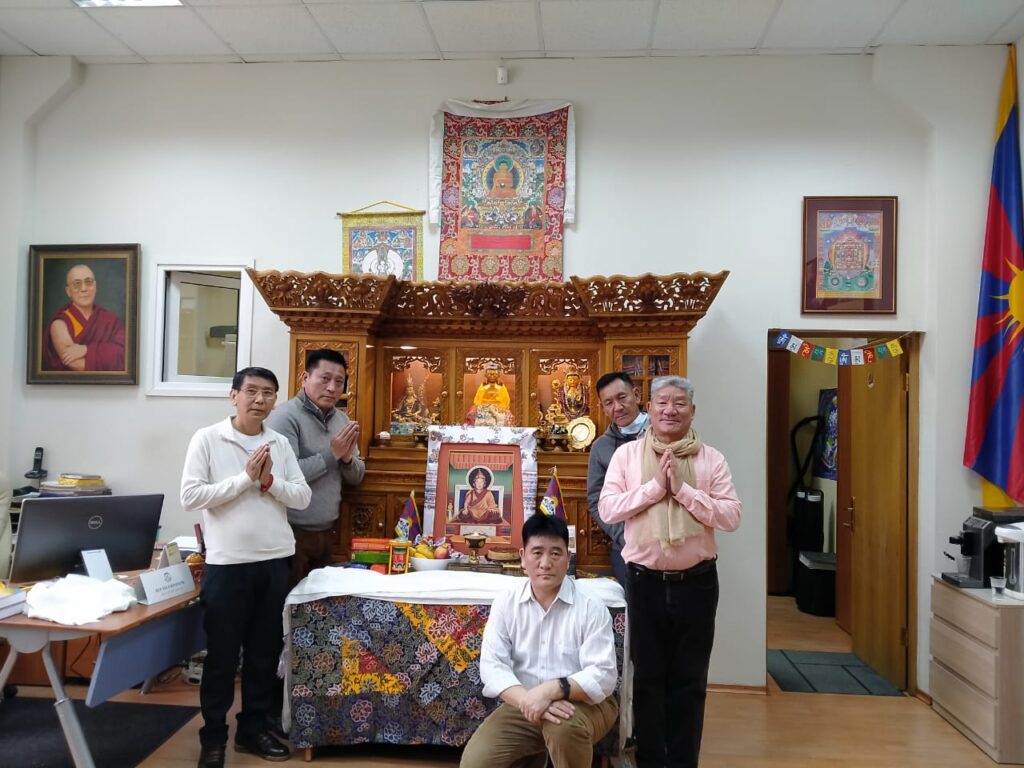 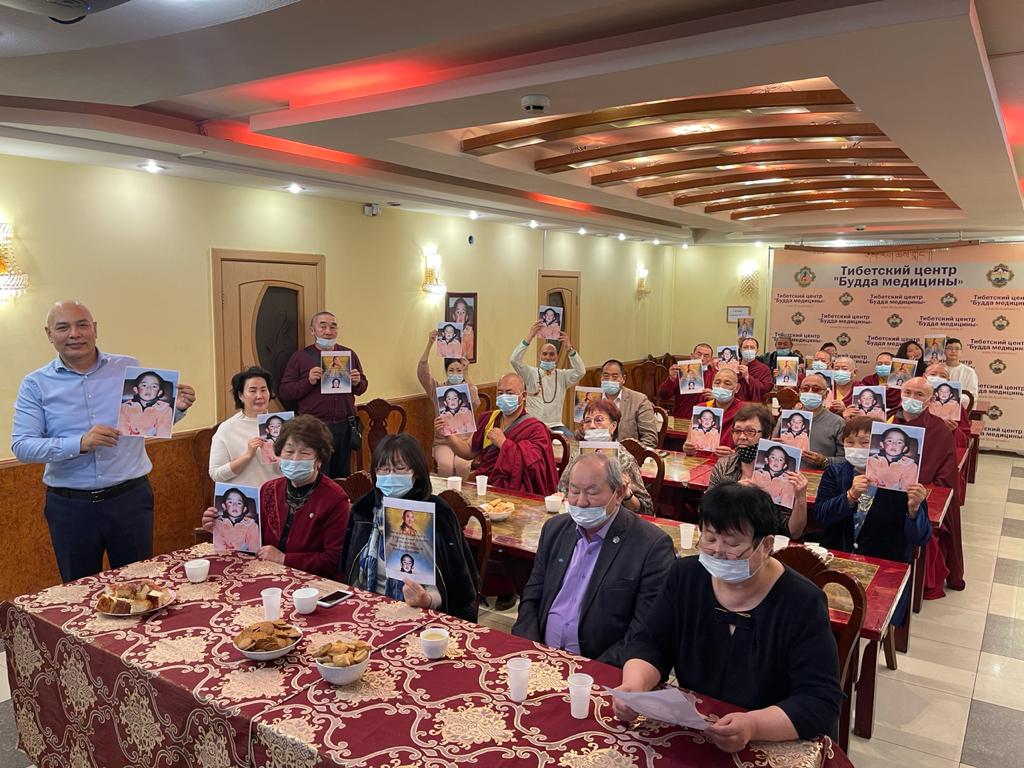 Members of the Tibetan community of Buryatia and scientists from the Buryat Scientific Center meeting dedicated for Panchen Lama birthday. 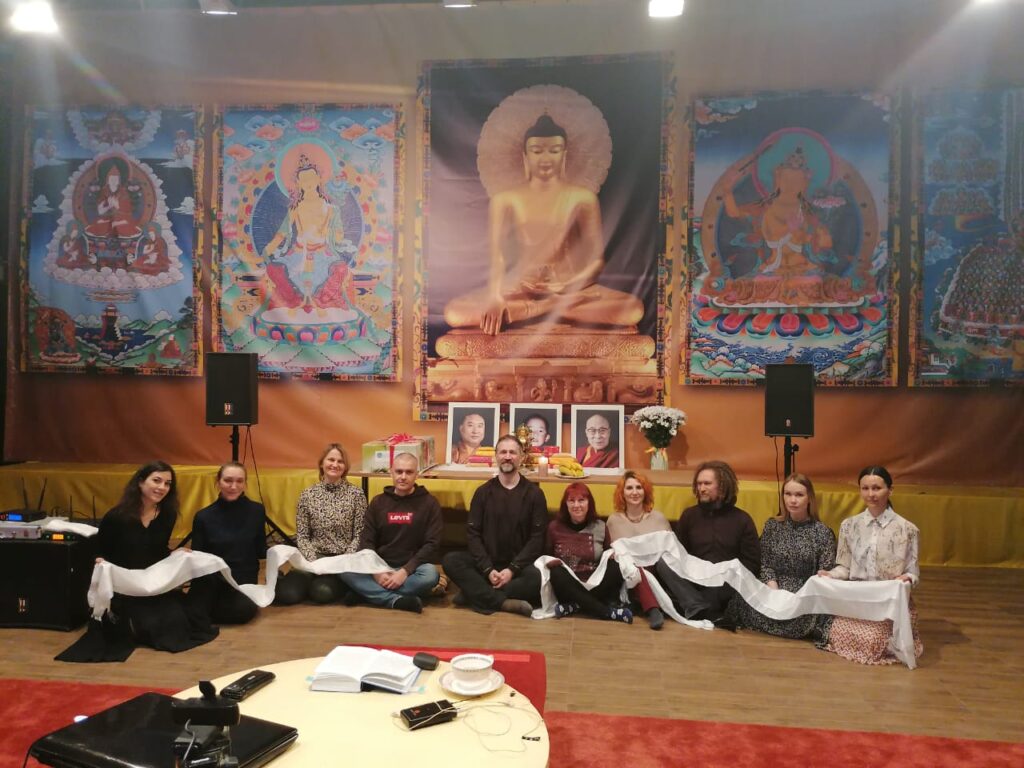