Virtual Celebration of 31st Anniversary of the conferment of Nobel Peace Prize on His Holiness the Great 14th Dalai Lama of Tibet, live broadcast via TIBET TV Facebook page, organised by Office of Tibet-Washington DC, on 10 December 2020

The Speakers and the guests spoke about His Holiness’s personal impact upon themselves, and many speakers shared their personal interactions with His Holiness.

Representative Ngodup Tsering began the event with a prayer and welcoming speech.

Sikyong Dr. Sangay began the series of speeches by lauding His Holiness’s legacy in rebuilding Tibet despite the daunting circumstances through “step by step” resilience. From Tibetans to Uyghurs, and to Hong Kongers, Sikyong explained the vast interrelated experiences of those repressed by the Chinese Communist Party and lamented China’s inclusion in the United Nations Human Rights Council. Sangay quoted Secretary of State Pompeo’s comment, “Either you transform China, or China will transform you” to stress how the CCP is a threat to universal values. In closing, Dr. Sangay urged the speakers to continue their support for justice.

Special Coordinator Destro spoke about the importance of recognising the extent to which the Chinese Communist Party tries to control the religious freedom of Tibetans and access into Tibet. He urged other countries to implement laws such as a Reciprocal Access to Tibet Act, an Act that passed in Congress in the United States. He praised His Holiness’s commitment to nonviolence and dialogue and urged other countries to partner with the United States in speaking out for human rights in the China region, especially of the internment of religious minority groups and the sinicization of Tibet and Tibetans. 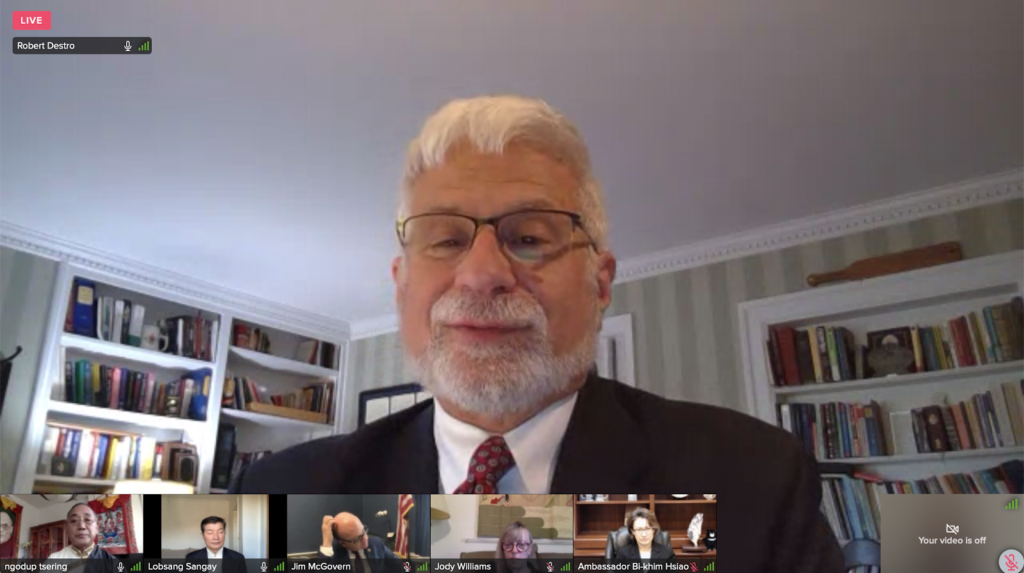 Chairman of the Congressional-Executive Commission on China, Jim McGovern, praised His Holiness the Dalai Lama for raising the Tibet issue to an international level. He explained how the Tibet issue is a bipartisan topic in Congress and he paraphrased Speaker Nancy Pelosi, “If we do not speak out for human rights in China and Tibet, then we, as a country, do not have the moral authority to talk about it any other place in the world.” He assured his commitment and the unfailing congressional support for Tibet.

Congressman Levin shared a personal story about his meetings with His Holiness. The Congressman had studied Religion and Buddhism in college, and he had studied Buddhist philosophy and history at the Chogyam Trungpa, Rinpoche’s Naropa Institute and then spent the 1981-82 academic year in the University of Wisconsin Year in India Program. As the only student studying Tibetan that year, and he lived among the monks at the Central Institute for Higher Tibetan Studies in Sarnath and had his first meeting with His Holiness the Dalai Lama then. Congressman Levin stated that his interaction with His Holiness “was a totally transformative experience.” And he shared a picture of himself with Holiness which was taken in 1989. He ended his speech by stating, “I commit to working every day to live the example His Holiness has set for us. He was a hero of mine 31 years ago, and he’s a hero of mine today, so I’m going to do my best to honor his life’s work in my own work as a member of Congress, and as a human being committed to peace.” 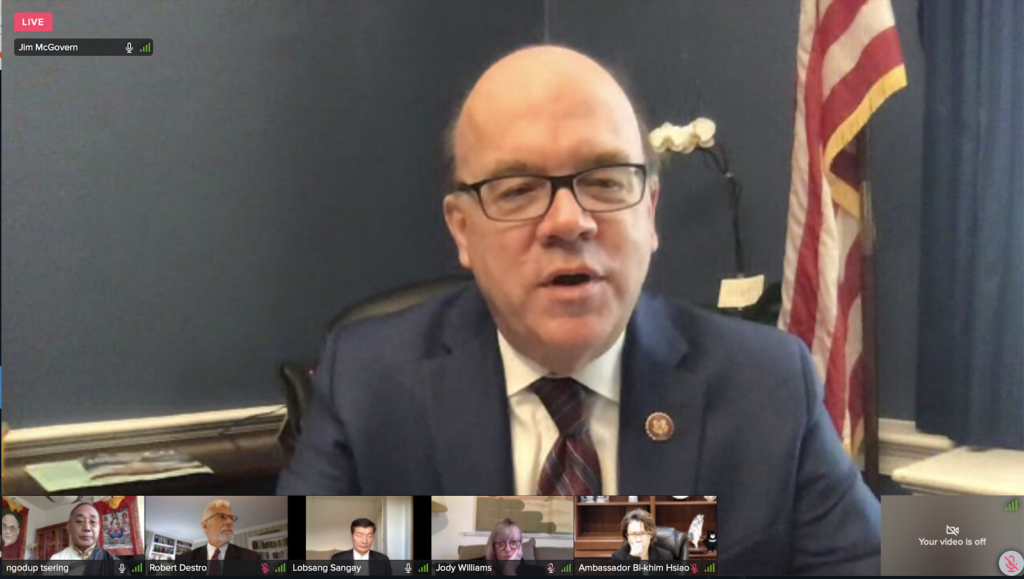 Chairman of the Congressional-Executive Commission on China, Jim McGovern.

“I’ve been called many things in my life. A very memorable thing I’ve been called is being called a ‘Dalai Lama cabal’ by the Chinese government, and I wear that title with pride” recalled Nobel Laureate, Jody Williams. Ms. Williams is most well known for her service in banning anti-personnel landmines, and she has met His Holiness many times through human rights-oriented events. Ms. Williams recounted how inspiring His Holiness’s strength of leadership in the Middle Way Approach and for the rest of the world.

Taiwan Ambassador Bi-Khim Hsiao explained how many Taiwanese peoples study His Holiness’s teachings and stated that she was no exception to that phenomenon. The Ambassador’s first encounter with Holiness was when she became the interpreter between His Holiness and the President of Taiwan many years ago. Ambassador Hsiao had founded the bipartisan Friends of Tibet Caucus and reported that the caucus continues to be an active group. The Ambassador concluded her speech, “We must never take for granted our freedoms and ways of life” and expressed solidarity with those without basic rights. 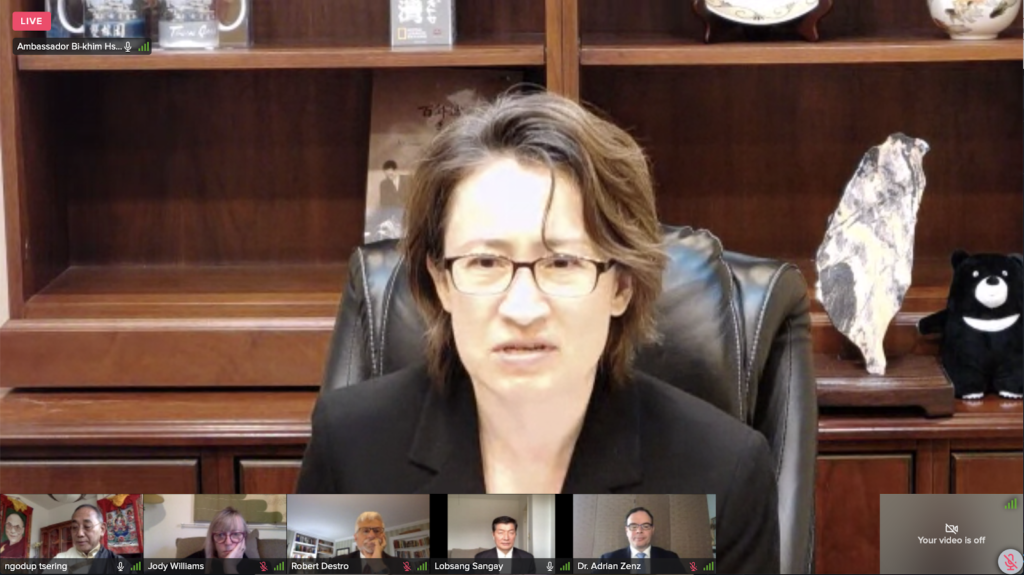 Senior Fellow Dr. Adrian Zenz, a leading scholar of the Xinjiang and Tibet human rights repression, highlighted the co-developed repression between Uyghurs and Tibetans under the Chinese Communist Party rule. Dr. Zenz expertly explained the concerning rise in techno-authoritarianism in China by which ethnic minorities are under increasing surveillance. Also to be of concern, Dr. Zenz reported that Chinese state media have recently announced militarized vocational training programs for Tibetans, a scheme that would negatively impact religion and other human rights of Tibetans. Dr. Zenz also explained the underreported policy of the CCP that would force Tibetan nomads to give up their herds in exchange for shares in state-run entities, entities that would perform their own farming activities. Coupled with the quota mandates, the recent surge in Tibetan oppression could lead to Tibetans being deported outside of their counties, and perhaps outside of Tibet, for their forced labor. Overall, these “poverty-alleviation” developments will profoundly affect Tibetans’ grasp of their spirituality. Dr. Zenz pledged to continue to study the situation of Tibet. 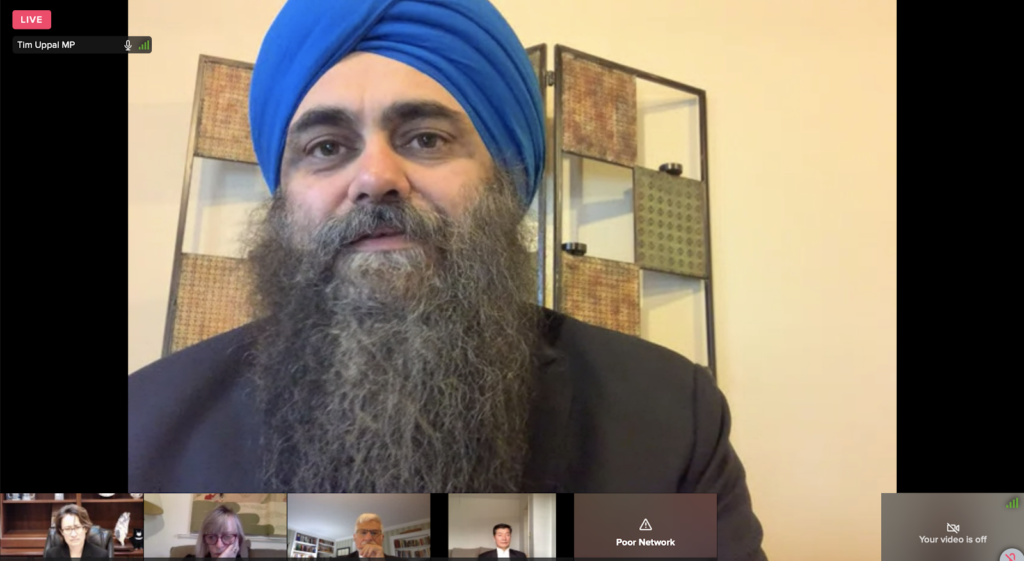 Representative Tsering thanked the participants and spoke at length about the importance of celebrating His Holiness,  “The award of the Nobel Peace Prize to His Holiness has been a source of tremendous pride and joy for the Tibetan people. He has been recognized around the world as a symbol of peace, a man of compassion, and a selfless leader who is universally revered by all. Tibetan community takes pride and feels grateful that even with a tiny population of six million, we are to be able to offer to the world a Nobel Laureate and visionary leader.” And he went on to make it clear that the event has traditionally been done in-person, but that has been inhibited because of the Wuhan-originated pandemic.

Secretary Tashi Dhondup ended the event with a vote of thanks to the speakers and His Holiness. 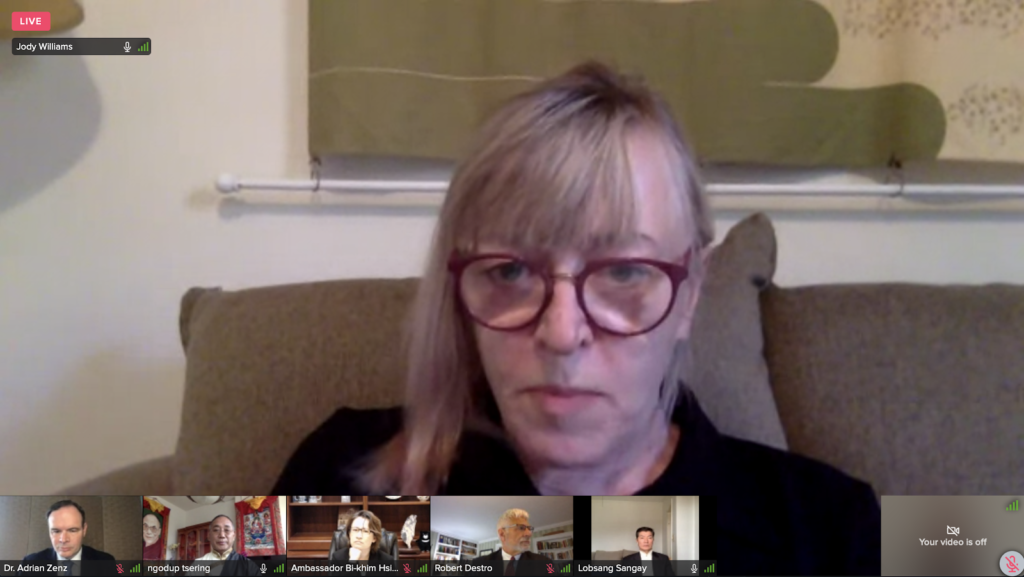 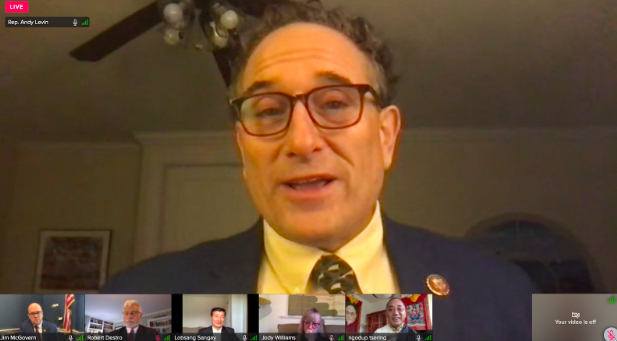 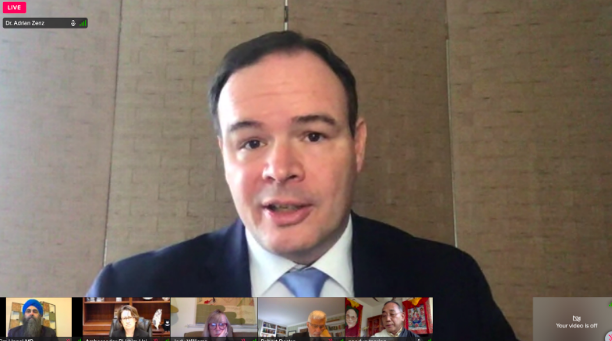