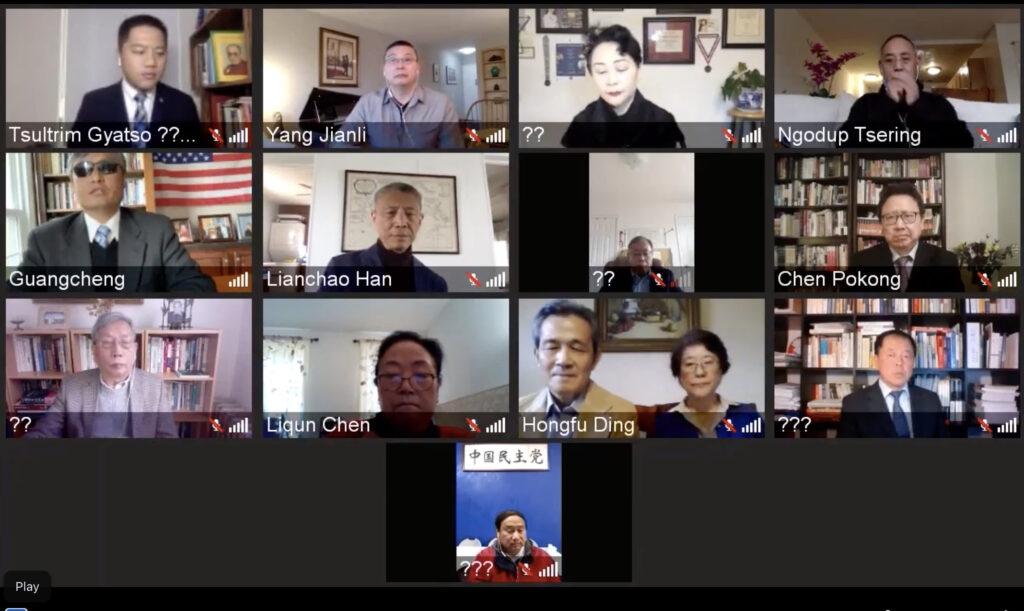 Representative Ngodup Tsering greeted the speakers and thanked them for attending the special event by highlighting the importance of the day which changed the political relationship between Tibet and China and also between Tibet and India.

“It opened up a new chapter in their history,” he said. “While His Holiness and [the] CTA were very sincere and genuine in their offer to address the Sino Tibet problem, Chinese authorities are taking harsh and aggressive measures to completely annihilate Tibetan people and culture.”

Tsultrim Gyatso, the OOT-DC’s Chinese Liaison Officer, welcomed the speakers and highlighted the achievements in the preservation of Tibetan language and culture under the guidance of His Holiness the Dalai Lama, both in Tibet and in exile. Tsultrim explained the four principal commitments of His Holiness and the purpose of the dialogue.

Mr. Chen Guagcheng, an eminent human right lawyer, specified the importance of the Sino-Tibet dialogue and its significance to continue. He admires the preservation of Tibetan language and culture by His Holiness and Tibetan people in exile. Mr. Chen described the CCP’s brutal destruction of Tibet, East Turkestan, and Mongolia—even Han Chinese are victims under this authoritarian regime. He agreed that the ongoing massive atrocities by the CCP are due to a lack of resistance to the regime. While sharing his optimism on the coalition of the international community, he maintained that the only solution is the end of the communist party in China.

Mr. Hu Ping, the renowned Chief editor of the Beijing Spring Magazine and one of the Chinese scholars who met His Holiness in the early 90s, applauded the development of a successful democratic system in the exile Tibetan community. He remarked, “This is a marvellous achievement.”

Paying tribute to His Holiness’s wisdom and leadership, Mr. Hu explained that the Tibetan issue has become an international issue that CCP cannot afford to ignore. He was amazed that Tibetans who are born in exile have such profound love and devotion to His Holiness and also those who were born in Tibet after 1959.

He also mentioned that the Tibetan gatherings in North America are better organized and attended than the Chinese events, although the Chinese population in North America are much higher. In comparison to His Holiness, who regularly meets with global leaders and the international community, and has earned the love and respect of Chinese leaders, there are no such Chinese leaders who can be like him.

Mr. Chen Pokong, a famous Chinese political commentator and leader during the Tiananmen Square Massacre, explained for over half a century, the Chinese Communist Party-controlled Tibet but His Holiness and the Central Tibetan Administration has remained as the hope and legitimate representation of the Tibetan people. He shared his experience of visiting and seeing a number of  Tibetan monasteries and schools in India.

“Due to His Holiness,” he said, “Tibetan Buddhism has become a global religion,” he said.

Mr. Yang Jianli, the founder of Citizen Initiative for China, established the Interethnic Interfaith Leadership Conference with guidance from His Holiness. He interprets the success of His Holiness as follows: First, His Holiness’s vision of Middle Way Policy offers a new path for conflict resolution. Second, Tibetan Buddhism became a global religion. And third, the democratization of Tibetan governance is a lasting solution for the sustainable Tibet movement.

Sheng Xue, a renowned writer, reporter and activist, shared her perspective on witnessing the most successful exile development in the history of global exile stories. She considers the importance of coalition above all. Commending the Tibetan community for excellent advocacy work, she emphasized the need to work hand in hand.

Mr. Ding Yifu, a researcher who has attended a Mind and Life Conference, an initiative of His Holiness, and his wife Li Jianglin, a renowned scholar and historian who wrote “Tibet in Agony” emphasized the importance of educating Chinese people as to what has happened to Tibetans. He added that more dialogue between His Holiness and leading scientists can potentially bring a solution to the Tibet issue. Mrs. Li urged the Tibetan youth not to forget all the sacrifices made by the elder Tibetan generation to preserve Tibetan culture and language.

Mr. Zhou Fengsuo, a student leader during the Tiananmen massacre who once sat down with premier Li Peng for a resolution, recounted his time in prison when His Holiness received the Nobel Peace Prize. He learned that the martial law imposed in Lhasa were similar to the martial law imposed upon the student movement in Beijing. He said he became very emotional to see a photo of His Holiness looking towards the mountains, which gave an impression of a profound longing for Tibet: his home. Mr. Zhou believes that many Tibetans and Chinese share a similar longing to return home. He praised the vigorous energy maintained by the Tibetan youth and promised to do his best to be a part of the movement.

Mr. Han Lianchao, the cofounder of Citizen Power Initiatives for China and policy researcher, affirmed that His Holiness defeated the CCP. Although the Chinese Communist Party tried to commit genocide in Tibet with the sinicization of Tibet’s culture, language and religion, Tibetans have preserved them in exile.

“The first victim of one country two system policy is Tibet,” Mr. Han maintained. Mr. Han explained the 17 Point Agreement in detail, and he said he strongly believes that the reincarnation issue will solely remain the rights of the Tibetan people.

Mrs. Wang Ruiqing, a former member of the People’s Congress in China and an oral historian on Tibet, shared her findings on the problems that Tibetans are facing inside Tibet. She said Tibetans in Tibet, even those in government agencies, respect and carry their hope for His Holiness. Mrs. Wang described CCP’s genocidal policies can be traced back to Mao’s era and sinicization is continued till these dates in religious policies in monasteries and language policies in school.

Mr. Pei Yiran, former director of the department of Humanitarian studies at Shanghai University of Finance and Economics, shared his respect for His Holiness and the gradual change in his understanding of Tibet from seeing the movie on serfdom in China to interacting with Tibetan history and culture. Mr. Pei believes the nonviolent path with a simple request for preservation of language and culture as mentioned in Middle Way Policy should be considered by China.

Mr. Li Hengqing, media personnel and scholar requested China to let His Holiness return back to Tibet. He believes the solution to every discriminated community in China will come when there is a change in the authoritarian government structure. Mr. Li thinks the Middle Way policy is the only method that can solve the Tibetan issue and urged for more dialogues and events to let the Chinese understand His Holiness vision of Middle Way Policy.

Mr. Zhang jie, media personnel and legal expert stated that His Holiness gained respect from the entire global community for his great leadership in exile. He suggested recognizing the change in Chinese political plans and global stance on China, Tibetans should move forward with a strategy to resist in coalition.

Mr. Wang Juntao, Chairman of the Chinese Democratic Party, gave the story of meeting with His Holiness in 1995, a time when he had different perspectives on Tibetan modernization. “His Holiness focused more on the preservation of Tibetan language and culture than on political advocacy, which is why the exiled Tibetan community thrived successfully without losing their identity,” he said.

Chairman Wang thinks His Holiness’ compassionate approach on every issue is different from what most of the scholars deal with conflict. He thinks the Chinese scholars still lack the understanding of compassion and wisdom that His Holiness promotes. Mr. Wang mentioned His Holiness has some profound suggestions for society as a whole and that should be learned by the Chinese and international community.

Moderator thanked the speakers for their support and insight shared in the two and half hours of dialogue. He then concluded with the promise of more Sino-Tibet Dialogue events in the future and in-person meetings when the pandemic is over.