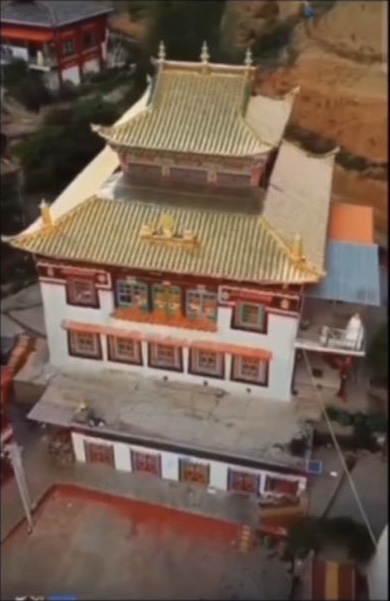 The temple that houses the 30-foot-tall Maitreya statue (Tib: Jetsun Jampa) before its destruction.

Three Tibetans pilgrims were arrested in Drakgo in January after they were found in possession of “politically sensitive information” on their phones during an inspection, according to a recent report.

A woman named Nortso and two men, Asang and Dota, were arrested under the allegations of keeping pictures and videos of the recent demolition of the 30-foot-tall Maitreya statue at Drakgo monastery, said the report, citing a source.

According to the report, the trio are residents of Drakyab county, Chamdo (Ch: Changdu), Tibet Autonomous Region and were returning from a pilgrimage to the monastic community in Larung Gar in Serthar County. It was reported that some of the photos were found as background images of their WeChat accounts during the search. They are currently being held in the Chamdo police station.

In another confirmed incident, Tashi Dorje, a monk of Drakgo monastery, was earlier arrested around 1 or 2 January 2022. He was accused of sending information about the recent Drakgo unrest outside Tibet.

Censorship remains high in Drakgo county as one source reported, “Keeping or sharing photos and videos of demolitions of Buddha statues, and using photos [Buddha Statue] as the background photo on WeChat, is considered a politically sensitive act with offenders facing criminal charges.”

The recent Drakgo unrest, tied to China’s deliberate and relentless attack on the Tibetan identity, began last October when a Tibetan monastic school was forcibly demolished. In December, officials commenced the demolition of two huge Buddha statues, highly revered by the local residents, 45 huge prayer wheels and burnt down prayer flags. Every attempt of Tibetans to disclose information about the demolition was savagely suppressed. As a result, around a dozen Tibetans were captured and subjected to “political reeducation” programs.

China’s attempts of drawing respect and acceptance from the Tibetan community towards their rule are proving futile as more news emerges of Tibetans getting arrested in relation to the recent crackdown.

Picture of Drakgo depicting the locations of the recent demolitions. The smaller circle shows an empty field where the temple housing the Matreya statue was earlier located.