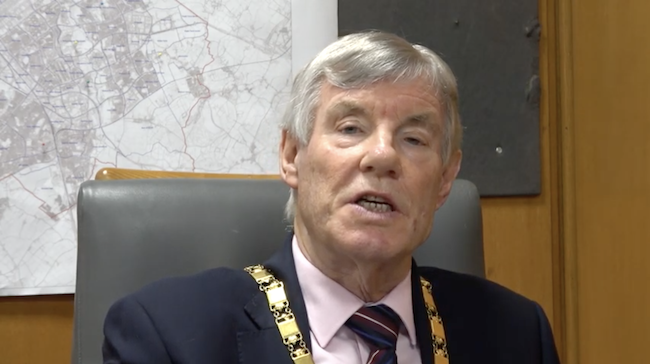 Dharamshala: Mayor Sam Crooks of Milton Keynes in England, issued a statement on April 20 via youtube on the occasion of the Tibetan flag-raising day. He started by expressing his regret in not being able to hold the event this year due to the current situation of COVID-19 pandemic.

He explained that the flag-raising day has been held at the town for a number of years, attended by his predecessors in their official capacity.

The Mayor, in the speech, highlighted the three main reasons for the significance of the flag-raising day:

“The first reason is, we are showing solidarity to the people of Tibet and that is important to us in Milton Keynes.

The second reason is, we are aware of maintaining history and identity within nations. We can’t allow land, just to be taken by invasion and facts on the ground to justify what has happened.

Thirdly, we believe in the principle of self-determination. And that’s why I think we should be raising the flag, which I hope we will be able to do once again in future years.”

The Office of Tibet in London, on behalf of all Tibetans, expressed their gratitude to the Mayor for his support to the Tibetan cause.

This year’s Tibetan flag-raising event would have marked the 7th annual event since 2014, had the Wuhan-origin coronavirus pandemic not affected normal life. Under normal circumstances, the event would be marked by the official address from the Mayor of Milton Keynes, the Representative of Office of Tibet based in London and Tibet supporters and conclude with a group of flag-bearers rally around the nearby Willen Lake to raise awareness among passersby.