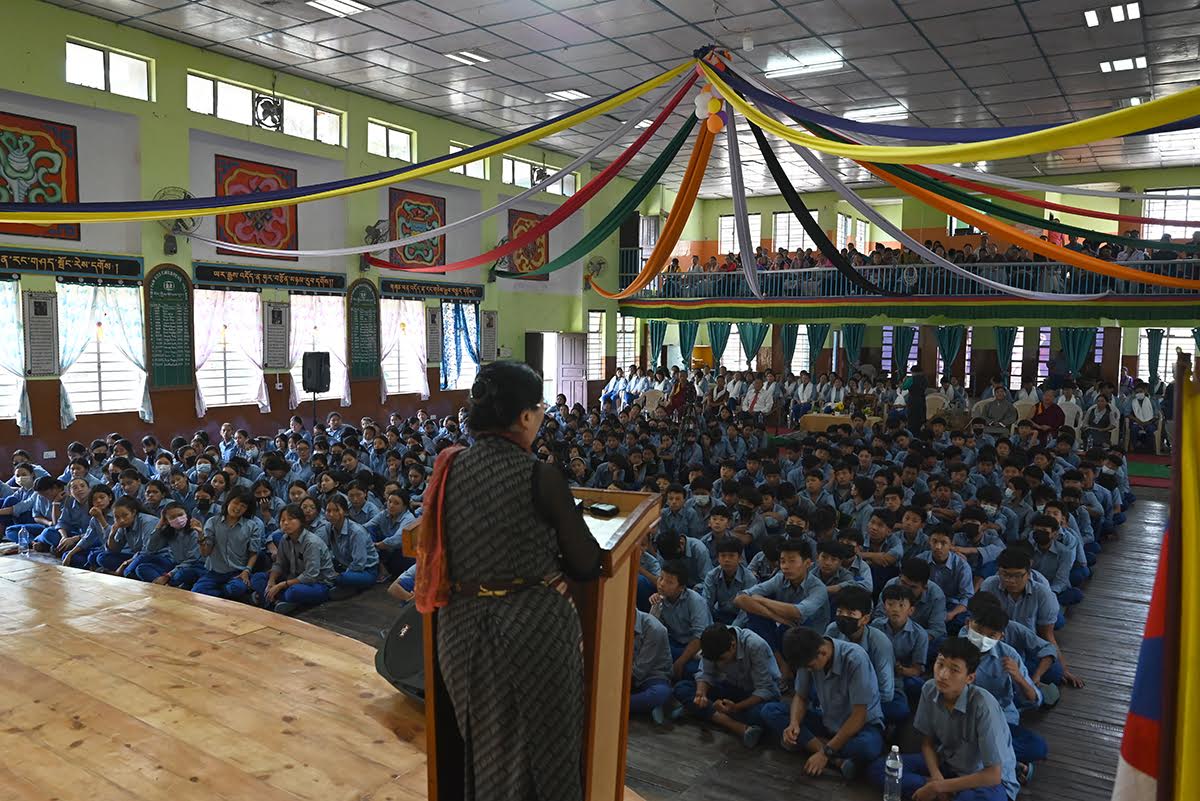 After offering a traditional white scarf to graduating students at the ceremony, Kalon Tharlam Dolma Changra lauded the Director for his dedicated supervision while felicitating the students on their graduation after years of studying, during which, Kalon reckoned students have learned overall education being in Tibetan school. She further told graduates to feel grateful for the unobstructed completion of schooling and, additionally, Kalon counselled students to learn from the failures and experiences that students will prospectively encounter in their upcoming phase of life to prevail, saying “these are the actual life lessons”.

Moreover, the Education Kalon underscored interacting frankly and constantly with other students from various cultures to improve one’s communication in foreign languages as well as to create broad exposure to the outside world. She also emphasised graduates to advocate Tibet issues in their respective colleges to create awareness while recommending the DoE’s orientation booklet on transition, college admission and scholarship to outgoing class XII students of 2022. 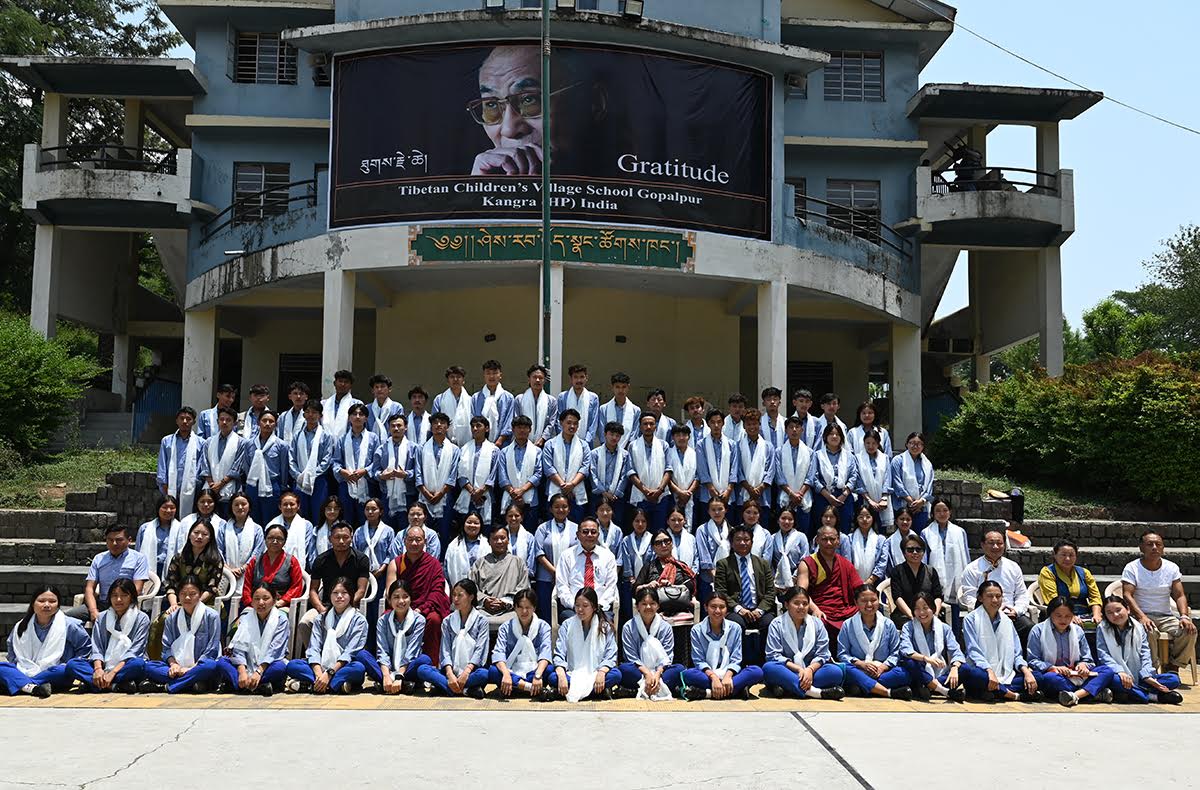 Concerning college life, the chief guest of the event directed students to opt for courses based on individual’s interests and passions; at the same time, she advised outgoing students to refrain from regular consumption of unhealthy eatables given the essentiality of good health for studies. More emphatically, Education Kalon dissuaded graduates from falling into negative influences of others in future and urges everyone to use their analytical thinking to evade the imposters.

Apart from these, Kalon Tharlam Dolma Changra appreciated teachers and staff for their dedicated services and stressed teachers to properly guide and raise students to build them a bright future.

The graduation ceremony also involves a recitation of self-composed poem from the school’s captain and solo songs from several other students. A student representing the graduates delivered his message expressing gratitude to the school and teachers, where the school Director also spoke.

In his opening address, Director Kalsang Phuntsok commenced the formal event with an elaborated oration on His Holiness the Dalai Lama’s lifelong contribution to the sustenance of Tibetans in exile, eventually turning it into one of the most successful exile communities. He then urged outgoing students to constantly recall His Holiness’ graciousness in their forthcoming life and act according to the latter’s guidance which he believed will be of service to His Holiness’s well-being and long life. In addition, he also advised graduate students on various grounds regarding attaining their future endeavours through persistence and commitment.

Following the gathering, Education Kalon paid a brief tour to the school’s new facilities with the Director and Principal. 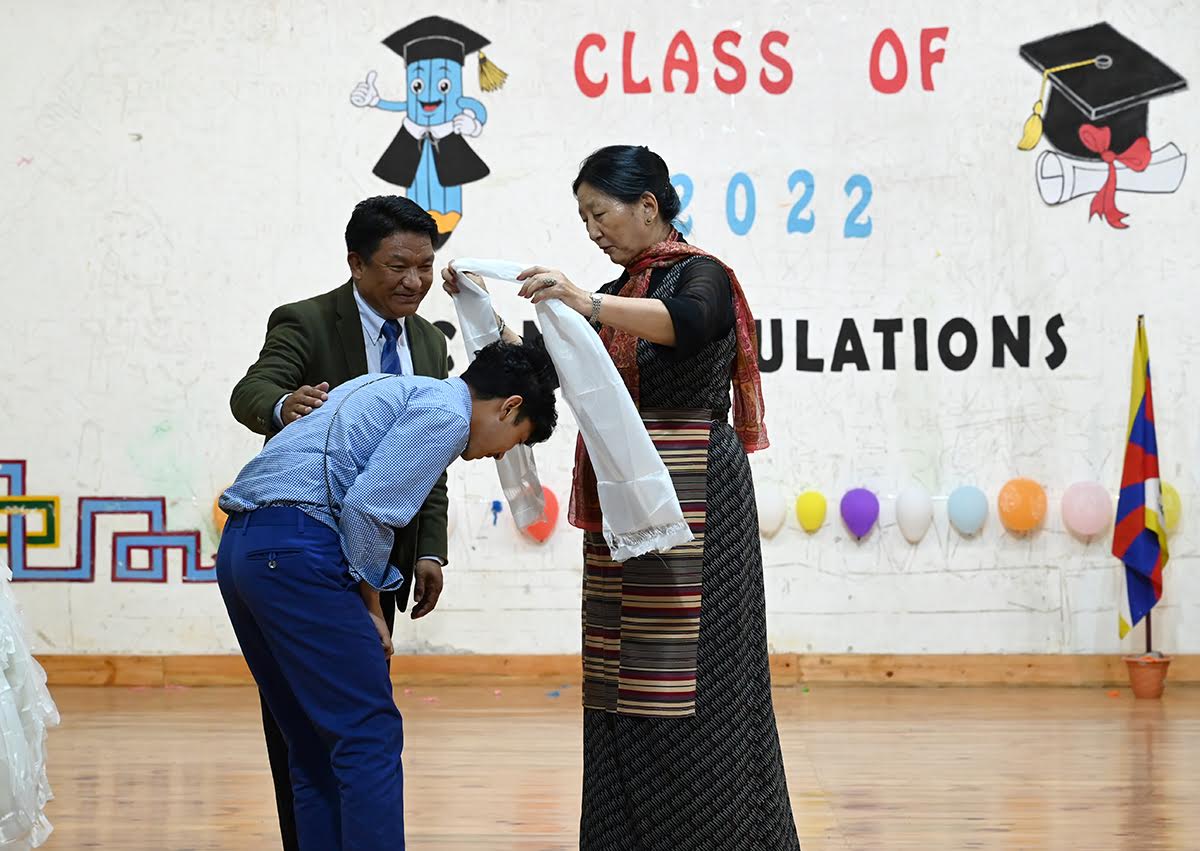 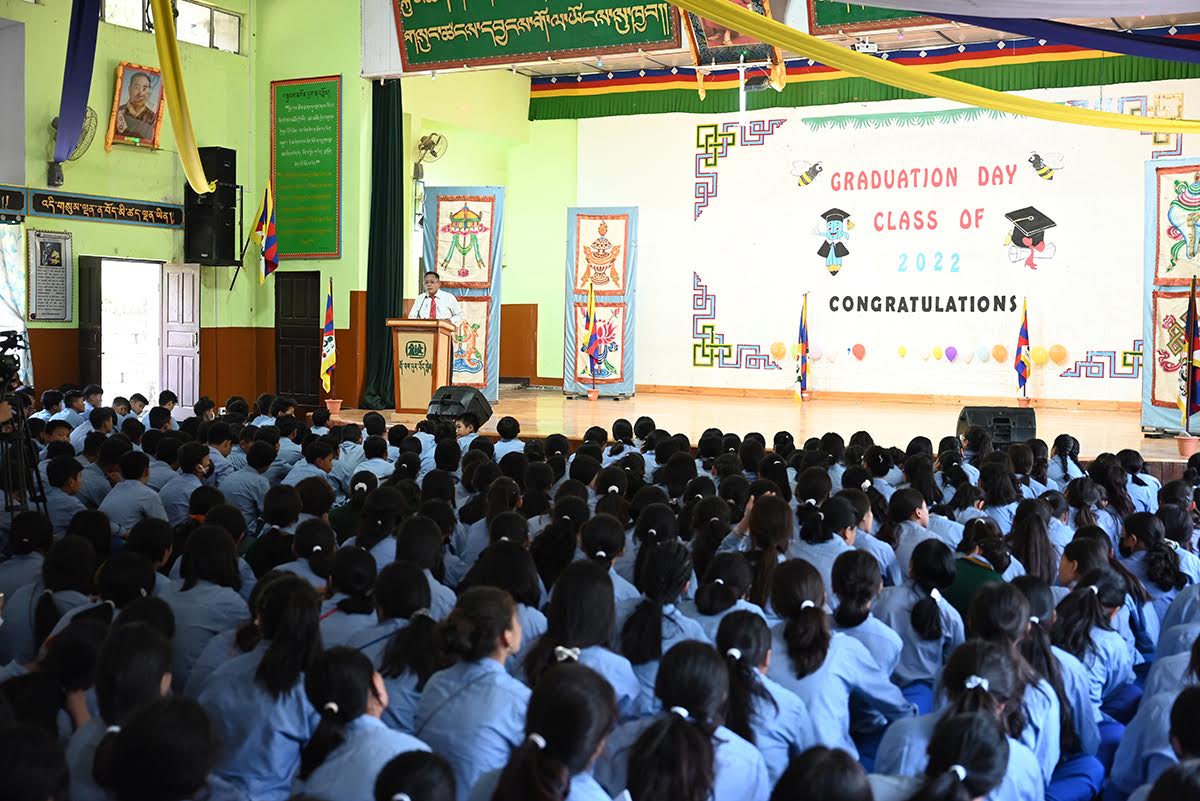 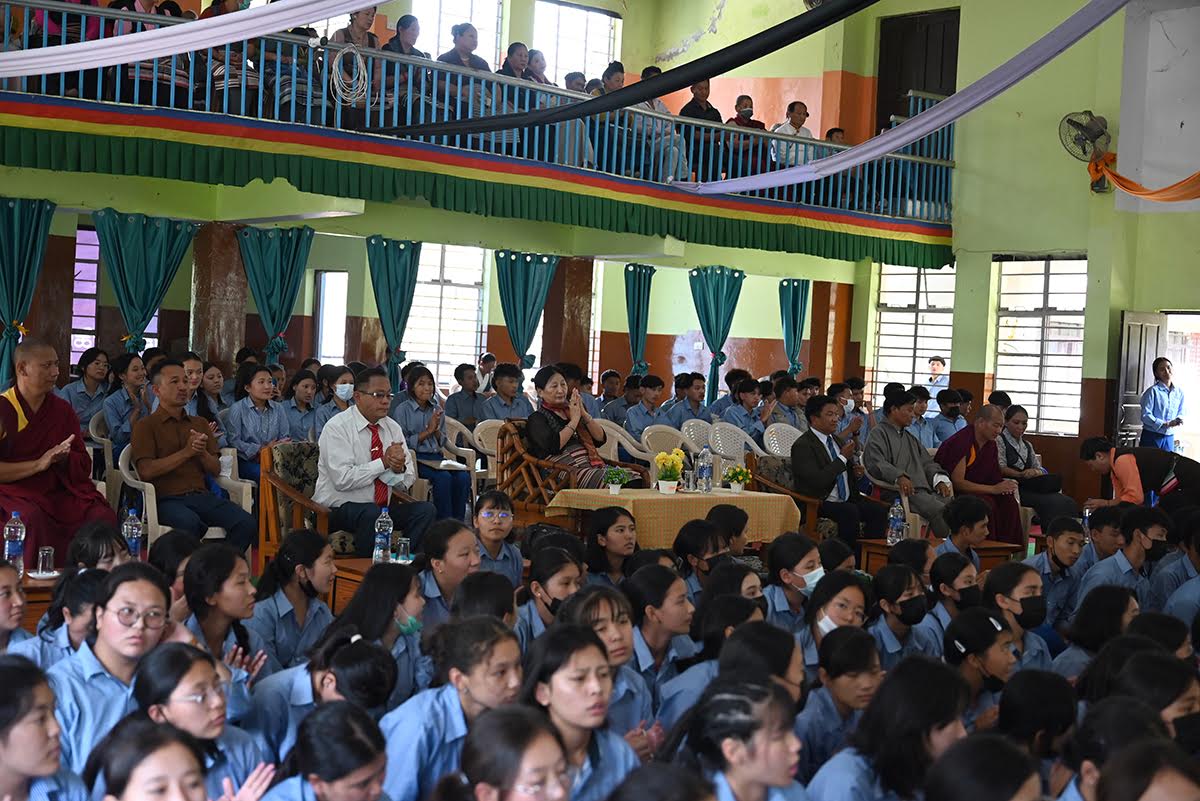 Chief guest and guests during the recitation of poem by a student. Photo / Tenzin Phende / CTA 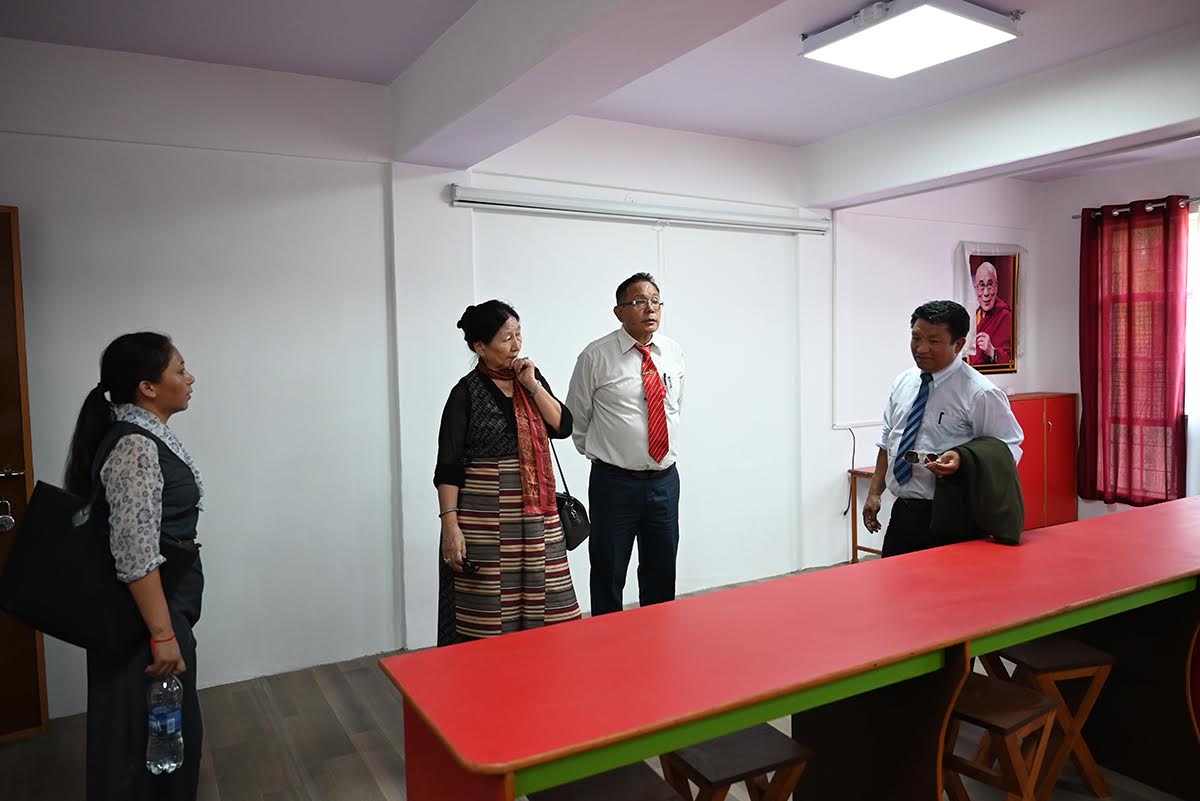