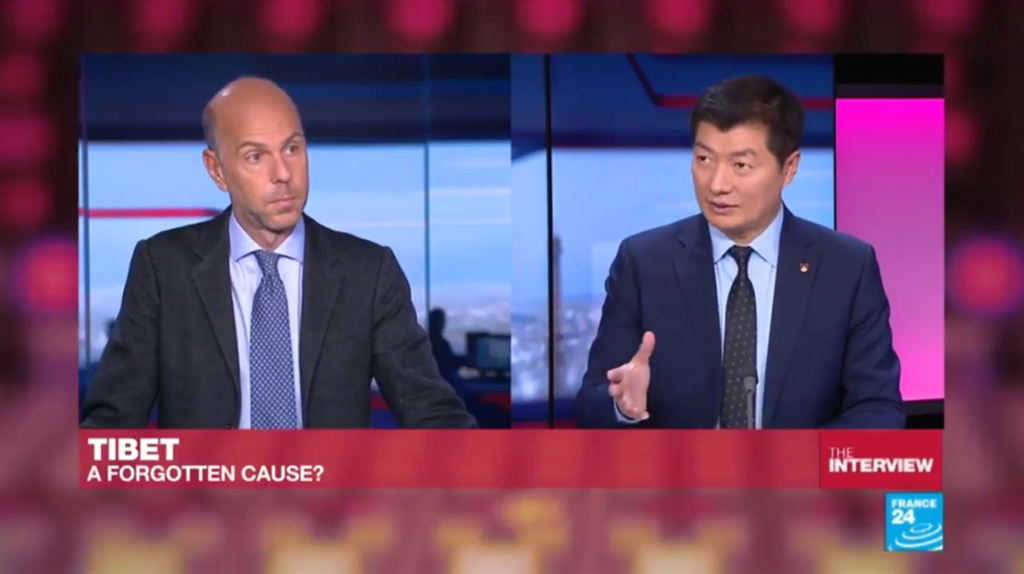 Paris, France: In an interview conducted by French media FRANCE24, the President of the Central Tibetan Administration Dr Lobsang Sangay discussed the future of Middle Way Approach and Tibet and international responses towards Tibet in the face of China’s growing economic and diplomatic clout during his visit to Paris, France. (watch the interview here)

Speaking on France24’s program The Interview hosted by French politics specialist Marc Perelman, Dr Sangay refuted the misinterpretation that the growing presence of China makes the realization of genuine autonomy for Tibetan people a distant dream.

Highlighting the history of the great surge in the discourse on Tibet on the international stage, especially in the 80’s and 90’s, Dr Sangay iterated that Tibetan struggle for “Truth and justice is very much alive”.

Tackling the question on the habit of the Chinese government objecting foreign powers meeting with His Holiness the Dalai Lama and himself, Dr Sangay spoke of the growing realisation of China’s growth as competition and with that the felt need of understanding China, in which Tibet narrative is “very relevant” plays a crucial part, he added.

Dr Sangay who recently testified before the UN’s subcommittee on human rights despite the notice of objection from the Chinese embassy, iterated that irrespective of China’s influence or pressure, or global powers bowing to the pressure, the outcome of the Tibetan cause which is “ultimately Tibetan people’s cause” will be determined by the solidarity and unity of Tibetan people in Tibet and in exile, “which is very strong”, he added.

The interview also touched upon how the situation in Tibet and Human Rights condition have spiraled down during Xi Jinping’s term. Speaking of the demolition of Larung Gar and the ongoing demolition of Yarchen Gar, Dr Sangay expressed hope that as Xi steps into his second term, he would “relook at Tibet issue” and realize the failure and the ineffectiveness of the hardline policy of the Chinese government towards the Tibetan people.

Speaking of the Middle Way Approach, Dr Sangay iterated that the Tibetan struggle would always remain a peaceful struggle despite the differing political ideologies. Iterating the strategic importance of France where the Strasbourg Proposal was made at the European Parliament, which contributed to the formulation of the Middle Way Approach, Dr Sangay expressed his hope that French President Emmanuel Macron following in the footsteps of his predecessors would use his office to influence Chinese government to negotiate on the Tibet issue.