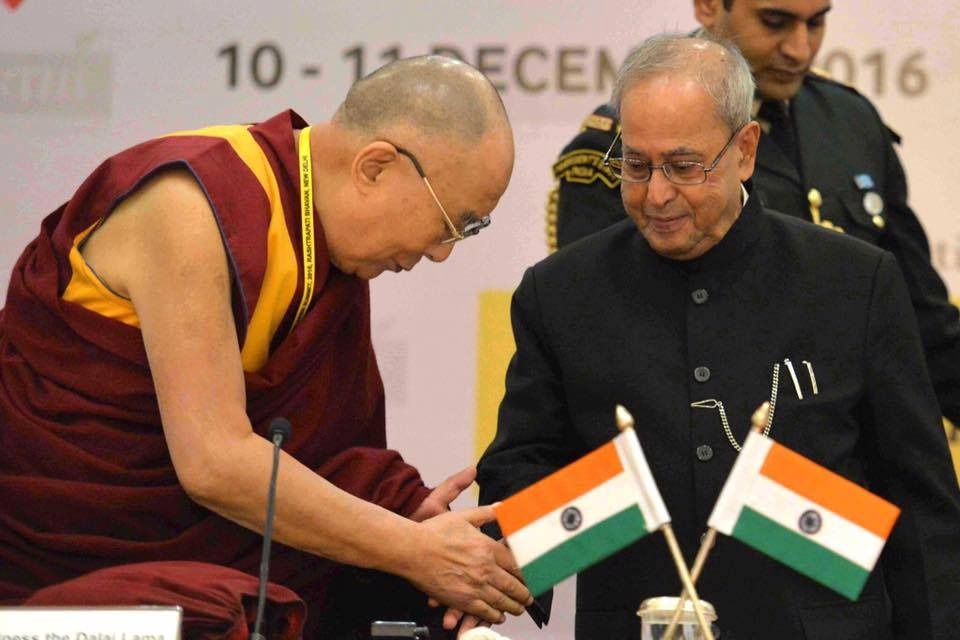 In 2016 when the late former President Pranab Mukherjee hosted His Holiness the Dalai Lama at the Rashtrapati Bhavan for the inauguration of the first-ever Laureates and Leaders for Children Summit, 10 December 2016. File photo

Dharamshala: Sri Pranab Mukherjee was one of India’s most remarkable and well-respected leader across all party lines, Sikyong Dr Lobsang Sangay said on Monday as he paid tribute to the former President of India.

Bharat Ratna Sri Pranab Mukherjee passed away in an army hospital in Delhi, after suffering septic shock from a lung infection while recovering from brain surgery. He was previously diagnosed with COVID-19.

“It is with great sadness that I learnt the demise of the former President of India Sri. Pranab Mukherjee. On behalf of the Tibetan people and the Central Tibetan Administration, I offer our deepest condolences the Government of India, the Indian people and his family,” Sikyong said in a condolence message.

“One of India’s most remarkable and well-respected leader across all party lines, Sri Pranab Ji has served India with unflinching dedication in various significant positions in his political career that spanned over five decades.”

He added, “In 2016, the former President hosted His Holiness the Dalai Lama at the Rashtrapati Bhawan along with other Nobel Peace Laureates despite strong opposition from the Chinese government.”

“During his tenure as a Defence Minister, India became a Full Dialogue Partner of the Association of Southeast Nations (ASEAN) in 1995. In 2005, once again under his leadership, India signed a crucial 10-year defence partnership with the United States. The recipient of Bharat Ratna, Sri. Pranab Ji is known for the economic reforms he ushered during his stint as the Finance Minister.”

“As India mourns the irreparable loss of a colossal leader, our thoughts and prayers are with the people of India and Sir Pranab Ji’s family in this time of grief.”