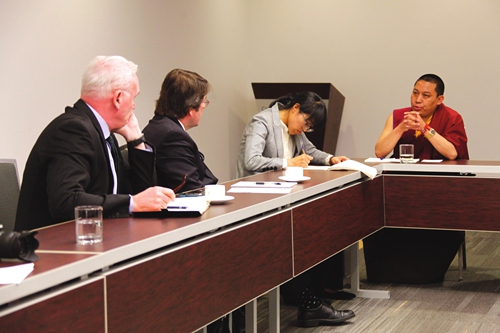 China’s “Tibetan delegation” Ngawang Tenzin (R), deputy to the People’s Congress of Tibet Autonomous Region with local representatives during a visit to Canada in May 2018. Photo/CNS photo

Dharamshala: The Information Secretary of Central Tibetan Administration said China has been sending its so-called “Tibetan delegation” overseas to promote propaganda on Tibet and to deter international criticism of its egregious human rights abuses inside Tibet.

“China has been sending delegations abroad to promote its propaganda on Tibet. They are here to sell China’s story on Tibet,” Secretary TG Arya said this Friday.

The Secretary rebuked China’s state media report published last week that had claimed the delegations visiting more than 20 countries including the US, UK, Canada, Australia and Belgium “to introduce the achievements made by Southwest China’s Tibet Autonomous Region in economic and social development, human rights, freedom of religion, reincarnation of living Buddhas and environmental protection.”

“In reality, Tibet has suffered greatly and is still undergoing a difficult time under the repressive Chinese regime.”

In a scathing review, the report revealed “severe restriction of religious freedom, speech, movement, and assembly” of Tibetans by the Chinese authorities, “further intensified surveillance of online and phone communication” and intensified “sinicization policies” by the Chinese authorities in so-called Tibet Autonomous Region under which monastic populations are being subjected to “legal” exams to test their competence in political re-education, “requiring senior religious figures to endorse state policies on the selection of the next Dalai Lama.”

“So there is no human rights and freedom in Tibet,” Secretary Arya said, underlining the exacerbated conditions inside Tibet that have forced 154 Tibetans to self-immolate in Tibet since 2009.

He said if China is really confident about their claims of progress and happiness in Tibet, they should allow foreign diplomats, UN rapporteurs and journalists to visit Tibet to verify the claims.

To judge by the most recent events, China has contradicted itself and the claims of “achievements” in Tibet by enacting the “Ethnic unity law” that is designed to silence any voice representing Tibetan identity and aims at complete sinicization of the Tibetan plateau.