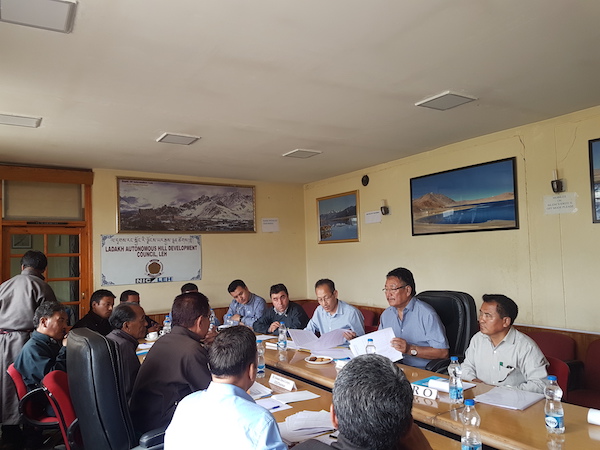 Home Kalon in a meeting with Dr. Sonam Dawa Lonpo, Chief Executive Councillor of LAHDC during a meeting.

Home Kalon Mr. Sonam Topgyal Khorlatsang and Secretary Mr. Chhimey Rigzen arrived in Leh on 6 August 2017 for a nine-day visit to the Tibetan settlements in Ladakh.

Home Kalon Mr. Sonam Topgyal Khorlatsang and Secretary of Home Department, Mr. Chhimey Rigzen accompanied by Chief Representative Officer, Ladakh Mr. Tsetan Wangchuk today called on Vice President, Ladakh Buddhist Association (LBA); President of Women’s wing, (LBA) and their executive members at 11:00 AM at their Office. Kalon Sonam Topgyal Khorlatsang thanked them for receiving him at their office and expressed his satisfaction for cordial relationship between Local and Tibetan population in the area. He also thanked the people of Ladakh for the warm hospitality being accorded to His Holiness during his visits to Ladakh.

In the afternoon, they attended a meeting chaired by Chief Executive Councillor (CEC) of Ladakh Autonomous Hill Development Council, Dr. Sonam Dawa Lonpo at his office to discuss on the implementation of Tibetan Rehabilitation Policy, 2014 and Government of India’s Scheme for strengthening Changthang Settlements. The meeting was attended by executive councilors and other officials of the local administration. While thanking Dr. Dawa and his councillors for inviting him to the meeting, Kalon Sonam Topgyal Khorlatsang spoke on the reason and significance of the Tibetan Rehabilitation Policy-2014 formulated by the Government of India. He also spoke on how the schemes for the strengthening Changthang settlements came into being and the impact it could bear on the livelihood and welfare of the people living in the region as well as on the security of the border areas.

Lastly, Kalon thanked the government of India and its people for giving all the supports and guidance to the Tibetan Community since we took refuge in India.