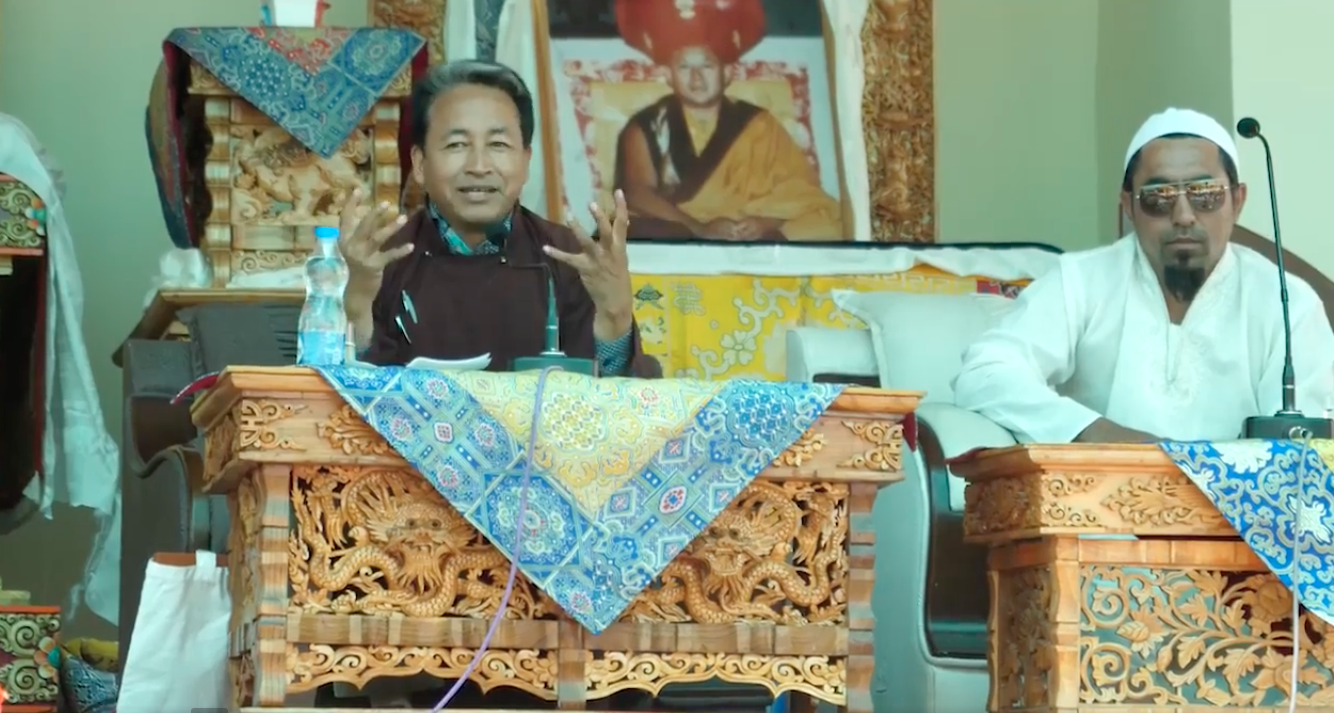 Sonam Wangchuk, award-winning innovator and education reformist speaks at the Khadot Yarchos Chenmo festival, a summer Buddhist council being held at Drikung Kagyu Thongdolphug Monastery in Khyungru, Nubra from 15 to 23 July 2019. Muslim Mullah Mohammed Iqbal is seen beside him.

Dharamshala: At a time when the world is spiralling towards polarisation and religious sectarianism is dividing societies apart, His Holiness the Dalai Lama’s persistent calls for religious harmony, understanding and dialogue is building bridges between communities that were otherwise divided.

This week, the Tibetan Buddhists and Muslim community in Ladakh came together to mark the year’s Khadot Yarchos Chenmo, a summer Buddhist council held at a Tibetan Buddhist monastery in Nubra.

Speaking at the proceedings of the Yarchos Chenmo, renowned innovator and education reformist, Sonam Wangchuk conveyed a message to His Holiness the Dalai Lama, in which, he observed how His Holiness’ message of harmony and oneness was doing magic in Ladakh communities.

He thanked His Holiness for his tireless and decades-long efforts in promoting interfaith dialogue and religious harmony in the region.

“Your Holiness the XIV Dalai Lama, I, Sonam Wangchuk from this tiny village Kyungru with some 50 to 60 people surrounded by few more villagers, not more than 300 people want to convey to you what magic your message, your teachings are doing in Ladakh,” said Sonam Wangchuk, speaking at the Yarchos Chenmo as he is joined by Muslim Mullah Mohammed Iqbal.

“At a time when the world is divided and going away from one another. At a time when even in Ladakh, various sects of even the same religion were going apart from each other, different sects having differences and distances, your message of harmony and togetherness is doing magic.”

“Your Holiness may not be here today. We pray for your good health and long life but your teachings are being absorbed by people somewhat as Eklavya learned by Guru Dronacharya without his presence so the message is going into each individual here; the message of harmony and bringing people close.”

Noting the remarkable signs of religious harmony in the region, he spoke about the full-fledged participation of various other Buddhist sects in the Yarchos Chenmo festival—which is mainly associated with Gelug sect of the Buddhist tradition and the support of Muslim members from various villages in Nubra towards organising the Buddhist event. Many of them even volunteered to help build a sacred Buddhist temple in the village.

“Not just among Tibetan Buddhist sects but at this event, we find Muslims of Nubra participating shoulder to shoulder with the Buddhists here. They have been voluntarily contributing to build the Phodrang, even Muslim villagers form villages in Nubra have supported. Here with me is Muslim Mullah Mohammad Iqbal.”

“That’s the beauty of this event and the magic of your message. Thank you very much, your Holiness,” said the award-winning innovator.