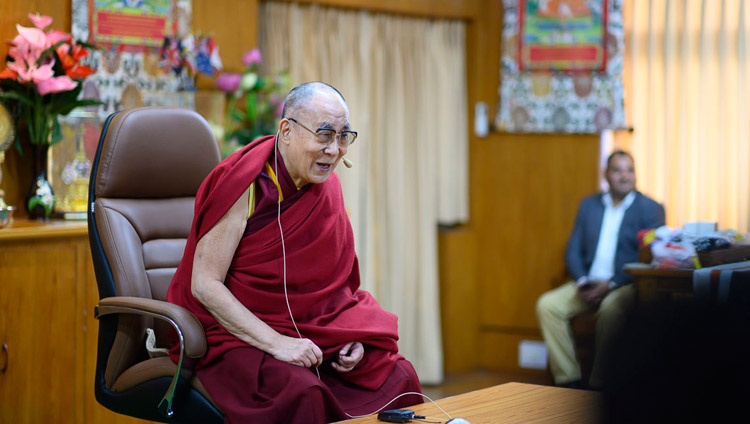 His Holiness the Dalai Lama speaking to the Nepal chapter of the Young Presidents’ Organization (YPO) at his residence in Dharamsala, HP, India on November 13, 2019. Photo by Tenzin Choejor/OHHDL

Dharamshala: When 30 members of the Nepal chapter of the Young Presidents’ Organization (YPO) met His Holiness the Dalai Lama this morning, he told them that Tibet and Nepal have long-standing historical connections and that it was an honour to receive them.

“The 7th century Tibetan King, Songtsen Gampo, married a Nepalese princess, as well as a Chinese princess,” he observed. “Then, when he founded the Jokhang Temple in Lhasa, many Nepalese craftsmen were involved in its construction.

“Here in the 21st century, we have kept alive the Nalanda Tradition that was introduced to Tibet in the 8th century. The Pali Tradition of Buddhism, which includes fundamental teachings such as the Four Noble Truths, their 16 characteristics and the 37 Factors of Enlightenment, relies on the authority of the Buddha’s words. The Nalanda Tradition, however, justifies sophisticated Buddhist philosophy on the basis of reason and logic. Nalanda masters asked, “Why did the Buddha teach this or that?” They undertook experiments and investigation.

“These days, scholars and professors in Chinese universities have access to books we’ve compiled and published here in the series ‘Science and Philosophy in the Indian Buddhist Classics’. They acknowledge that Tibetan Buddhism preserves the Nalanda Tradition and its scientific approach.

“This approach uses the potential of the human mind to the full. Although the psychology, science and philosophy it taught are to be found in nominally religious texts, there’s no reason why these topics can’t be studied in a more objective, secular and academic way.

“These materials are included in the 300-volume collection of Kangyur and Tengyur, the source of which was mostly Indian texts. I wonder though if any research has been done to discover how many texts, if any, had Nepalese and Chinese sources. And I wonder too if there are any works extant in Nepalese that were not translated into Tibetan?”

His Holiness invited questions from the 30-strong audience. Ajit Shah, the group’s leader, explained that there were Buddhists, Hindus and Muslims among them. They belong to the YPO, a global leadership community. 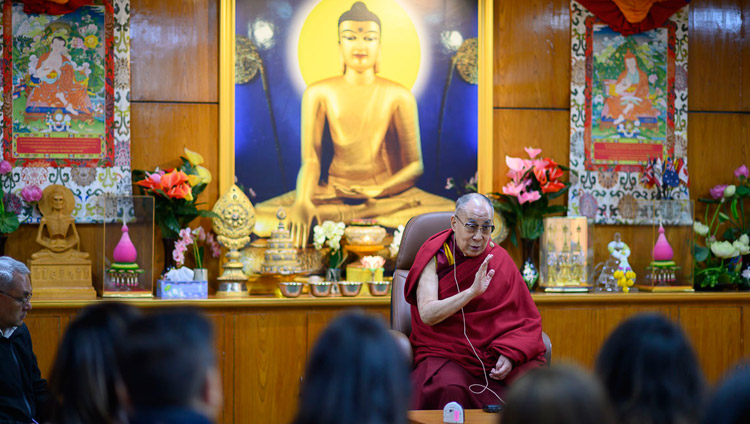 His Holiness the Dalai Lama speaking to the Nepal chapter of the Young Presidents’ Organization (YPO) at his residence in Dharamsala, HP, India on November 13, 2019. Photo by Tenzin Choejor/OHHDL

Asked what makes for happiness, His Holiness talked about the importance and effectiveness of the age-old Indian values of ‘ahimsa’—non-violence and ‘karuna’—compassion. He observed that in India Christians and Muslims too are influenced by ‘ahimsa’. The prevalence of non-violence and compassion, with the natural sense of respect it entails, are reasons why religious traditions in this country live in harmony side by side.

He pointed out that when individuals are too self-centred, they tend to be prone to fear, suspicion, anxiety and anger. ‘Ahimsa’ and ‘karuna’, compassion and restraining from harming others, act as an antidote to this. He added that scientists say that it is basic human nature to be compassionate because we are social animals. Our very survival depends on our community.

His Holiness also mentioned an important, unique aspect of Buddhist philosophy—pratityasamutpada or dependent arising. This and the theory of a lack of intrinsic existence mean that things don’t exist as they appear. Understanding this gap between appearance and reality also undermines self-centredness. Similarly, because destructive emotions are founded on a misconception of appearances, they have no proper basis. Positive emotions like compassion, however, are realistic and grounded in reason.

Questioned about how he sees the future, His Holiness recalled that the early 20th century had been spoiled by too much violence. However, he felt that in the century’s later years, the founding of organizations like the European Union and efforts to reduce nuclear weapons were signs of human maturity. He said he takes hope from the increasing numbers of people who understand that world peace depends on people in the world finding inner peace.

“One of the ways in which modern education is inadequate,” he explained, “is that it includes such a little understanding of how to achieve peace of mind. Ancient Indian knowledge was rich in its insight into the workings of the mind and emotions. I believe this could be combined with modern education to widespread benefit.”

Asked about his daily routine, His Holiness chuckled and told a story about an Indian politician’s asking him one morning if he had slept well. His Holiness answered that he always gets 9 hours of good sleep and follows that with 4 hours of meditation. That, he jokingly told him, helps him sharpen his mind so he can cheat people more effectively. The politician immediately responded, “O, I never sleep more than 6 hours, so I’m not able to cheat people at all.”

His Holiness remarked that despite facing all sorts of difficulties in his life, he has found cultivating altruism to be a helpful source of inner strength.

When the last questioner wanted to know the significance of chanting, His Holiness suggested that by itself chanting is just sound. The important thing is to pay attention to the meaning of the words—they are what can change your mind.