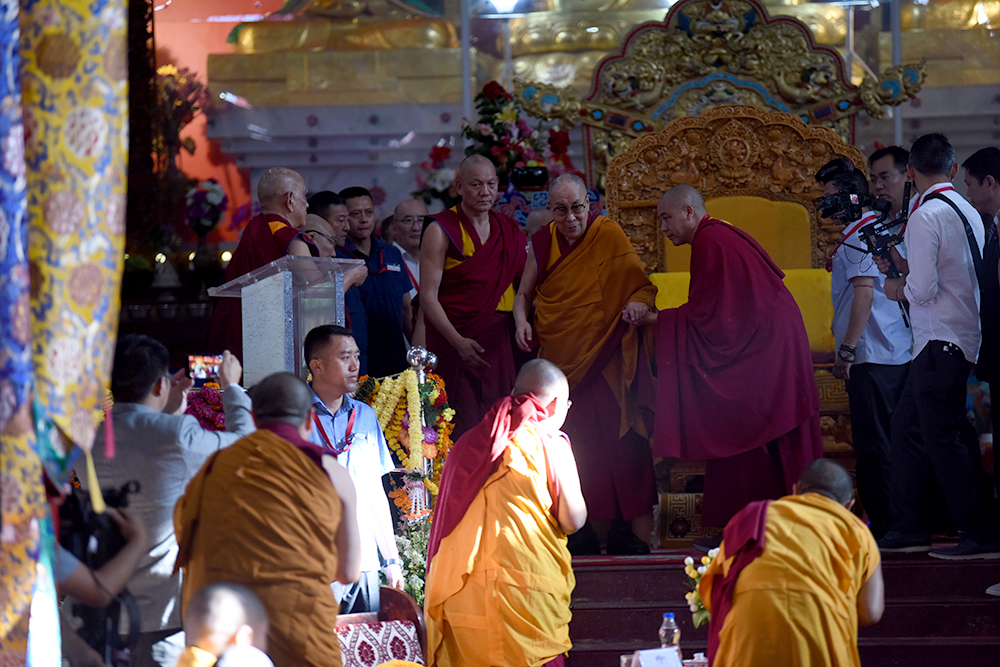 His Holiness the Dalai Lama arriving at the inaugural ceremony of the Symposium on Aryadeva’s ‘400 Stanzas on the Middle Way’ in Mundgod. Photo/ Tenzin Jigme/CTA

Mundgod: An audience of 15,000 monks and nuns and another 9500 guests and members of the public filled the Drepung Loseling Assembly Hall and spilled out into the courtyard this morning. They had gathered for the inaugural session of a Symposium on Aryadeva’s ‘400 Verses on the Middle Way’.

The Abbot of Drepung Loseling, Ven Lobsang Samten, began his address by paying homage to His Holiness the Dalai Lama, the embodiment of compassion. He noted that after 1959, the re-establishment of Tibetan Seats of Learning came about as a result of His Holiness’s vision and due to his kindness. His teaching has served as the foundation of the preservation of the Tibetan tradition. He mentioned the example His Holiness had set when, despite taking political responsibility for Tibet, he continued to pursue his own studies. Later, he would urge Tibetan monks and nuns to study and practise what they learned. He quoted Jé Tsongkhapa’s brief summary of his own career:

First, I sought out wide and extensive learning;
In the middle, I perceived all teachings as personal instructions;
Finally, I engaged in meditative practice day and night;
All this I have dedicated to the flourishing of the Buddha’s teaching.

The Abbot mentioned that all the speakers at the symposium would be students of Loseling. He repeated that it was a source of joy that His Holiness had agreed to attend. He prayed for His Holiness’s long life, the fulfilment of his wishes and that all present should come under the care of Chenrezig.

The moderator of the session, Geshé Yeshi Thapkay explained the protocol. Each presenter would have ten minutes to deliver their paper and there would be fifteen minutes to deal with any questions that might be asked. He requested that questions be clear and to the point.

The first presenter, a Lharampa Geshé, spoke about the first chapter of Aryadeva’s ‘400 Verses’, which deals with abandoning belief in permanence. He picked up on a reference in the first verse to ‘true vanquishers of death’. He asked if there are Arhats and Bodhisattvas who are free from death, why are we not aware of any of them among us? He added that the Buddha is said to have defeated death and yet he passed away at the age of 81.

The second presentation dealt with points from chapter two, Abandoning Belief in Pleasure. He began with an observation from the first verse, ‘Although the body is seen like a foe, Nevertheless it should be protected’. He explained that the body is seen like a foe because it is of the nature of suffering. This is borne out by lines from the chapter’s final verse, ‘Therefore all that is impermanent Is said to be suffering’. He noted that it is due to our misconception of self that we see our body as a permanent, independent entity. 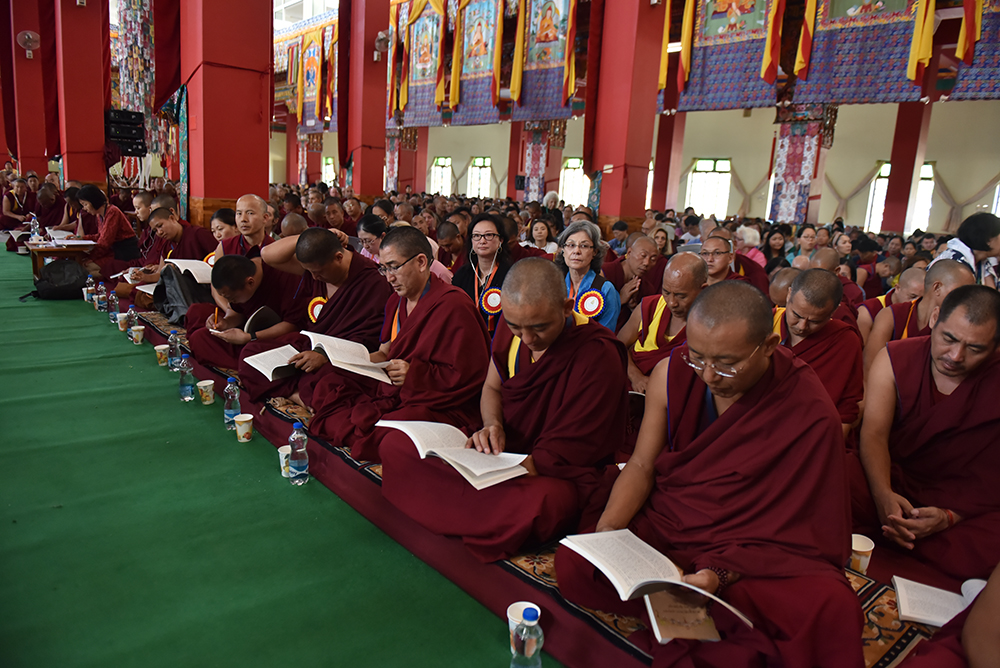 Members of the audience following the presentations during the Symposium on Aryadeva’s ‘400 Verses on the Middle Way’ at the Drepung Loseling Assembly Hall in Mundgod, Karnataka, India on December 17, 2019. Photo/Tenzin Jigme/CTA

No means whatsoever will purify
The inside of the body.
The efforts you make towards the outside
Do not match those towards the inside.

At this point, Loseling Abbot Ven Lobsang Samten intervened. He said he wanted to make clear that the ‘400 Verses’ were composed in a different era from today. The discussion of a woman’s body as an attractive object was intended to reduce desire, not in any way to demean women.

The fourth chapter, ‘Abandoning Pride’, and subject of the fourth presentation, discussed interpretations of the self. Chandrakirti wrote that the psycho-physical aggregates are identified as the basis for the self. Other schools assert that the self is the foundational consciousness or that it is consciousness. The Consequentialists state that the self is merely designated on the basis of the aggregates and is not separate from them. The presenter was asked to elucidate non-buddhist views of the self.

“Contaminated things are of the nature of suffering, therefore the more you seek pleasure, the more you encounter dissatisfaction.

“On the point about overcoming attachment to women’s bodies, one of the major commentaries to the ‘400 Verses’ states that this meditation should clearly be done in relation to men’s bodies too. References to the cleanness of the body also derive from the caste system. People of higher caste were regarded as clean and pure; people of lower caste were seen as unclean. There is no basis for such a distinction.

“His Holiness has advised us to study the Indian classic texts and not to rely only on Tibetan commentaries. I’d like to express my appreciation of the widespread efforts to do this.”

“So, this is a symposium on Aryadeva’s ‘400 Verses’. The principal source of the Middle Way School of thought, (Madhyamika) is the Perfection of Wisdom Sutras, texts which explicitly teach about emptiness, while implicitly indicating progress on the path.

“The purpose of studying here is not to be able to go off to America, but to see how much progress we can make on the path as represented by the mantra of the ‘Heart Sutra’. When Avalokiteshvara proclaims, “Tadyata gaté gaté paragaté parasamgaté bodhi svaha” (“It is thus: Proceed, proceed, proceed beyond, thoroughly proceed beyond, be founded in enlightenment”), he is telling followers to proceed through the five paths.

“Even if we’re unable to achieve omniscience, we shouldn’t slacken in our resolve to do so. Our immediate aim is to achieve the path of seeing and to realize emptiness directly.

“Chandrakirti’s ‘Clear Words’ is a word by word explanation of ‘Fundamental Wisdom’. When we study works like this, we can see how our long-standing misconceptions can be overcome. As the 7th Dalai Lama observed:

“Shantideva observed that there’s nothing that does not become easier with familiarity. We can achieve the wisdom realizing emptiness and make ourselves familiar with it. Contrary to this, ignorance has no sound basis. It is important to have some experience of emptiness—not just an understanding of what the scriptures say, but experience. It’s a matter of conviction.

“Happiness is to be found within. The essence is to develop love and compassion. That’s all, thank you.” The audience applauded.

During the words of thanks, the spokesman for the monastery again expressed gratitude to His Holiness for inaugurating the symposium. The audience applauded once more. He offered thanks not only to everyone in attendance but also to all those whose contribution had made the meeting possible. Finally, he voiced the hope that more such conferences will be held in the future. 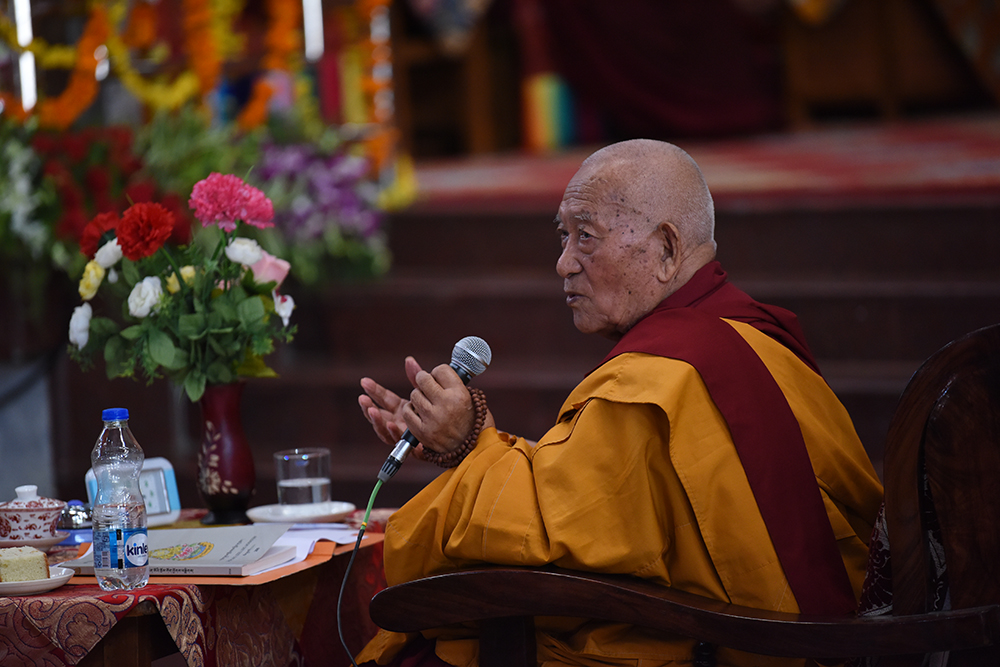 Geshe Yeshi Thapkay summarizing the presentations at the Symposium on Aryadeva’s ‘400 Verses on the Middle Way’ at the Drepung Loseling Assembly Hall in Mundgod, Karnataka, India on December 17, 2019. Photo/Tenzin Jigme/CTA 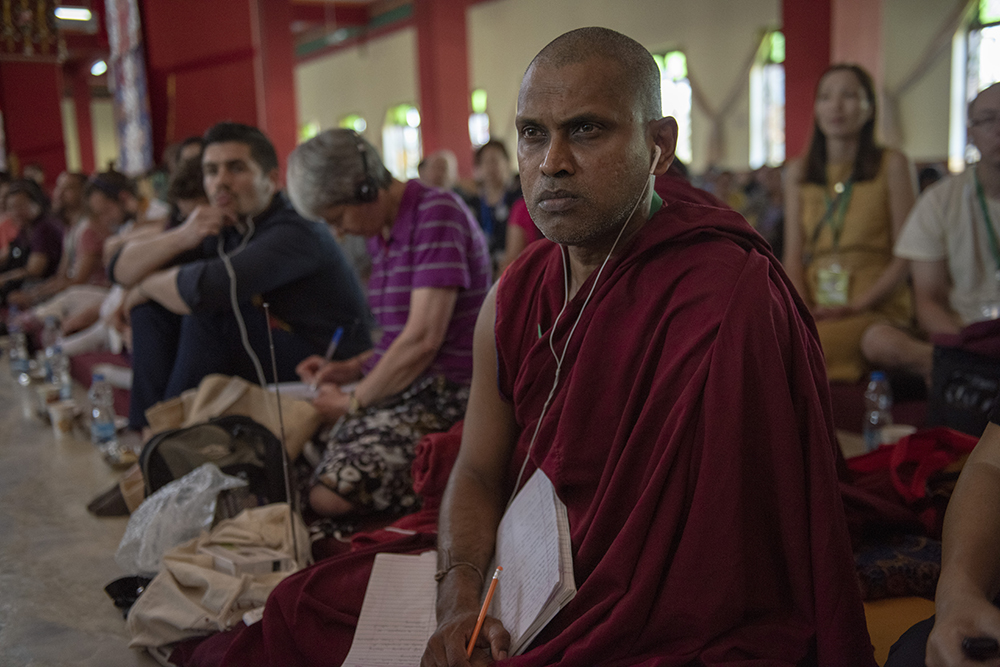 Members of the audience, many listening to translations on FM, following the proceedings at the Symposium on Aryadeva’s ‘400 Verses on the Middle Way’ at the Drepung Loseling Assembly Hall in Mundgod, Karnataka, India on December 17, 2019. Photo/Tenzin Jigme/CTA 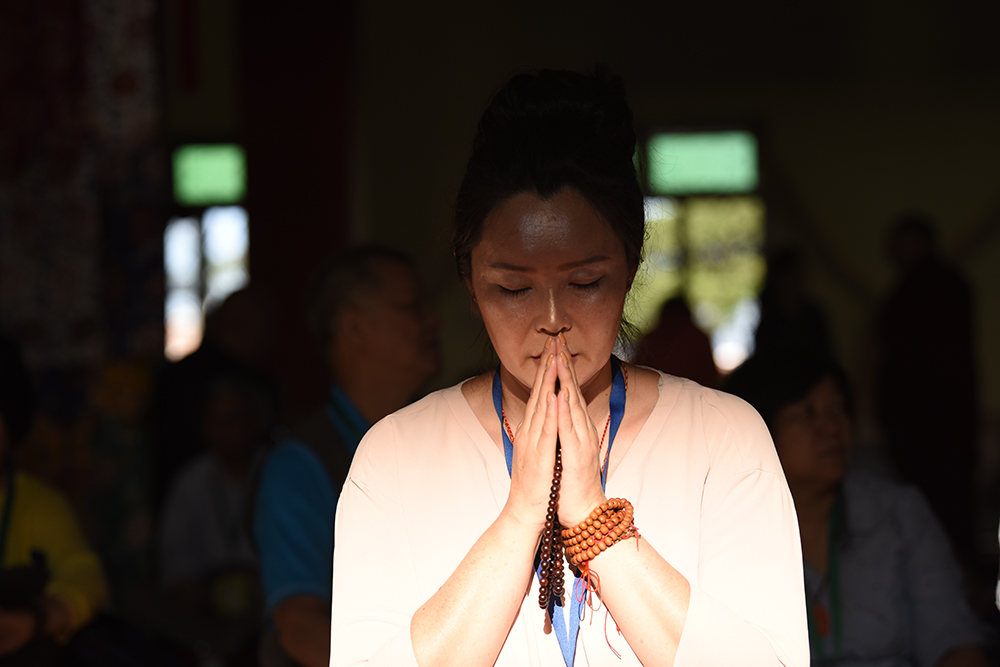