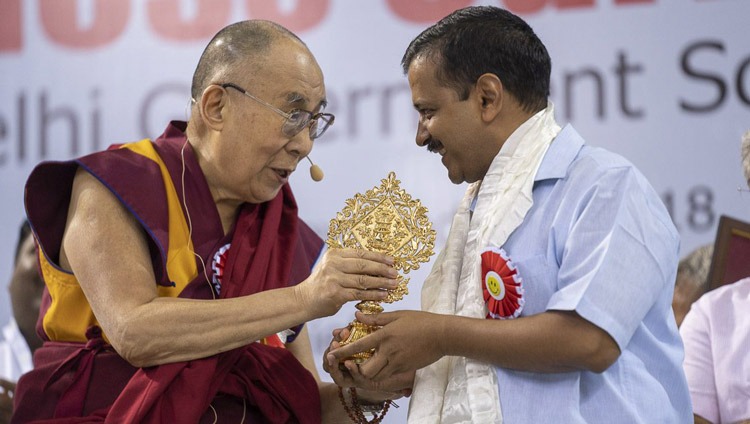 His Holiness the Dalai Lama presenting Delhi Chief Minister Arvind Kejriwal with an auspicious emblem at the conclusion of the launch of the Happiness Curriculum in Delhi Government Schools at Thyagraj Stadium, New Delhi, July 2, 2018. Photo/Tenzin Choejor/OHHDL

Dharamshala: Writing to congratulate Chief Minister of Delhi, Arvind Kejriwal, on his party’s success in the Legislative Assembly elections, His Holiness the Dalai Lama expressed his appreciation of the vibrant democracy that the people of India have enjoyed since the country became independent in August 1947.

“The people of Delhi will continue to benefit from your able leadership,” he added. “As I mentioned to you on 2nd July 2018 when we launched the Happiness Curriculum for Government Schools in New Delhi, I have deep admiration for the efforts that you and your government have made towards shaping better, happier human beings with improved values. These measures will have a positive impact on children’s overall education, as well as helping the poor to fulfil their dreams of improving their lives.

“In addition to promoting basic human values and encouraging inter-religious harmony, I am committed to reviving interest in the ancient Indian understanding of the workings of the mind and emotions. I therefore appreciate the Delhi Government’s initiative to incorporate aspects of inner mental development into the school curriculum. Through such initiatives, you are showing a path to the rest of India. This is important, as I believe India is the only country that can successfully combine this ancient knowledge with modern education and ensure that people know how to achieve lasting peace of mind. The positive response I have received from young Indians with regard to exploring such opportunities is a sign of hope and encouragement.”

His Holiness ended by wishing the Chief Minister every success in meeting the challenges and opportunities that lie ahead in strengthening happiness and fulfilling the hopes and aspirations of the people of Delhi.