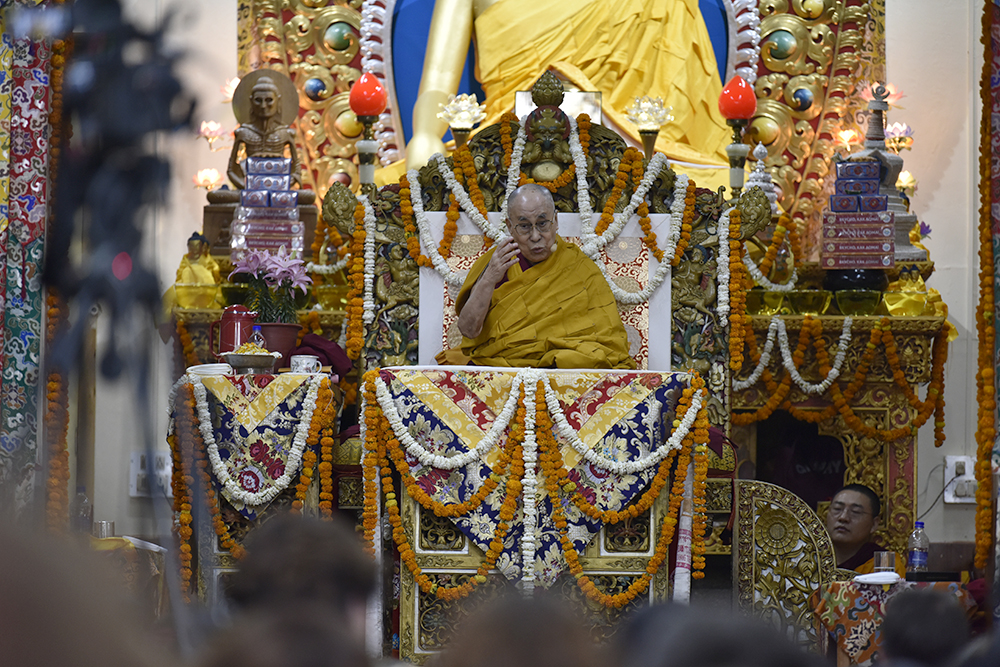 His Holiness the Dalai Lama conducting the ceremony for generating the awakening mind on the final day of his teachings at the Main Tibetan Temple in Dharamsala, HP, India on May 12, 2019. Photo/Tenzin Jigme/CTA

Dharamshala: Before His Holiness the Dalai Lama reached the Main Temple this morning, the ‘Heart Sutra’ was recited three times in the languages of the Buddhist Republics of the Russian Federation, Kalmykia, Buryatia and Tuva. Once he had arrived, greeted the eminent Lamas and the audience and taken his seat on the throne, the ‘Heart Sutra’ was chanted once more in Russian.

“So to conclude this series of teachings, today we’ll conduct a ceremony for generating the awakening mind of bodhichitta,” His Holiness announced. “As far as the awakening mind is concerned we need to understand that we are seeking to attain a state in which all defilements and faults have been eliminated and in which perfect realization—omniscience—has been achieved. Unsurpassed enlightenment is the goal you seek when you generate the awakening mind. You aspire to become a Buddha for the benefit of all sentient beings.

“In his ‘Entering into the Middle Way’ Chandrakirti wrote:

“Even those abiding in the first mind of complete enlightenment (bodhichitta)
Overcome those born from the speech of the Subduer Kings
And Solitary Realizers through their own merit’s increase.
On the (ground called) Gone Afar he surpasses them with his intelligence.

“And at the end of the sixth chapter of the same work, he wrote:

“And like the king of swans, ahead of lesser birds they soar,
On broad white wings of conventional and ultimate (bodhichitta) full spread.
And on the strength of virtue’s mighty wind they fly
To gain the far and supreme shore, the oceanic qualities of Victory.

“These powerful lines from ‘Entering into the Middle Way’ echo the praise of compassion in the words of salutation.

“The mind of compassion, non-dual understanding,
And the altruistic mind of enlightenment (bodhichitta)
Are the causes of Children of the Conquerors (bodhisattvas).

“In terms of practice, compassion is important in the beginning, middle and end. The ‘Prayer of Maitreya’ states that bodhichitta is the factor that leads you away from the lower realms, to higher realms and finally to that deathless state where you are free from aging and death. Since the time of the Buddha, the great Indian masters who followed him cultivated bodhichitta. This is why we refer to the Buddha as the teacher, the Dharma as the actual refuge and the Sangha, like Nagarjuna and so forth, as companions on the path to enlightenment.

“To achieve Buddhahood we also need to realize emptiness. The Middle Way propounded by Nagarjuna is important, so much so that Bhavaviveka criticized what he called Asanga’s and Vasubandhu’s recklessness in neglecting to accept and follow it. However, if we only read Nagarjuna, we won’t reach a very deep understanding. Addressing the challenges posed by other points of view has the effect of broadening and enriching our sense of discernment. Studying a variety of treatises has a clarifying effect.”

His Holiness explained that to conduct the ceremony for generating the awakening mind you can follow the extensive rite described in Asanga’s work the ‘Bodhisattva Grounds’, or the shorter version in Shantideva’s ‘Guide to the Bodhisattva’s Way of Life’. He suggested that today he would use the verses that begin, ‘With a wish to free all beings …’

He observed that the Buddha is someone who has travelled the path and teaches from his own experience how to overcome afflictive emotions, ignorance and their residual stains. By following his teaching we can eliminate all mental defilements, because of which he can be seen as the highest teacher.

His Holiness called on the audience to imagine the Buddha in the space before them as a living person surrounded by his Eight Close Disciples, Avalokiteshvara, Manjushri and so forth; the Seven Patriarchs like Kashyapa who came after him; the Seventeen Nalanda Masters, Nagarjuna and Asanga and their followers; the 84 Great Adepts (Mahasiddhas) such as Saraha and so forth.

His Holiness digressed to mention the distinction drawn by an 18th century Lama called Nyengön Sungrab between teachings that constitute the general structure of Buddhism and specialized teachings. Teachings belonging to the Sutras and works like Nagarjuna’s ‘Fundamental Wisdom of the Middle Way’ constitute the general structure that anyone can follow. Tantras, such as Kalachakra, that involve working with channels, winds and drops are specialized teachings intended for specific disciples.

Continuing to describe those imagined gathered around the Buddha His Holiness mentioned Tibetan masters as well as their Indian mentors: Nyingma masters like the 25 disciples of Guru Padmasambhava; Sakya masters of the LamDre tradition; masters belonging to the three Kadampa lineages; masters from the four major and eight minor Kagyu traditions and masters of the Renewed Kadampa tradition, the Gandenpas, Jé Tsongkhapa and his disciples.

If I do not actually exchange my happiness
For the sufferings of others,
Not only shall I not attain the state of a Buddha
Even in cyclic existence I shall have no joy.

“We have to make bodhichitta our main practice. When I was about 13 years old, with Ngodup Tsognyi’s active encouragement, I took great interest in emptiness, but bodhichitta seemed remote to me. However, after I came into exile and especially after I received an explanation of ‘Guide to the Bodhisattva’s Way of Life’ from Khunu Lama Rinpoché, I began to integrate bodhichitta into my practice. Over time, as a result of effort, it has become close to me. You should do the same. Generate bodhichitta, pursue the practice and what happened to me can happen to you.”

His Holiness asked the congregation to kneel on their right knees and, keeping the visualization he had described vividly before them, to recite the Seven Limb Prayer—prostration, offering, confession—taking the Buddha and so forth as witness, rejoicing in their manifest qualities, requesting them to teach, beseeching them not to pass into the state of peace, and dedication. Following that, he led them in reciting these verses three times.

With a wish to free all beings
I shall always go for refuge
to the Buddha, Dharma and Sangha
until I reach full enlightenment.

Enthused by wisdom and compassion,
today in the Buddha’s presence
I generate the mind for full awakening
for the benefit of all sentient beings.

As long as space endures,
as long as sentient being remain,
until then, may I too remain
and dispel the miseries of the world.

At the end His Holiness encouraged those gathered before him to recite these verses three times every day after they wake in the morning and three times again in the evening. He explained how cultivating bodhichitta and setting an aspiration for enlightenment at the beginning can set the tone for the whole day, enabling you to spend your time meaningfully in the service of others. Then, at the end of the day, you’ll be happy to dedicate the virtue for the benefit of all.

In conclusion, His Holiness recited verses of dedication from the Samantabhadra Prayer followed by lines from the end of the Great Treatise on the Stages of the Path to Enlightenment.

Likewise may I dedicate
Just as the skilful Samantabhadra,
With pure body, speech, and mind,
Pure actions and pure buddha-fields.

I shall give rise to the aspirations of Manjushri
For this bodhisattva practice of all-embracing good,
To perfect these practices
Without discouragement or pause in all future eons.

In regions where the supreme, precious teaching has not spread
Or where it has spread but then declined,
May I illumine that treasure of happiness and benefit
With a mind deeply moved by great compassion. 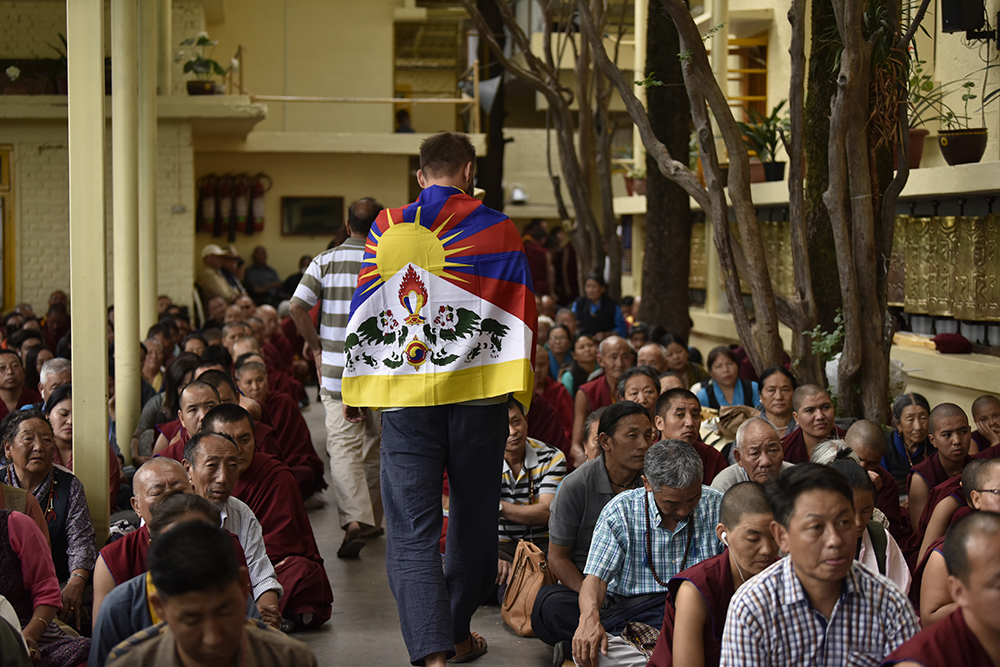 A member of audience is seen wearing a Tibetan national flag at His Holiness the Dalai Lama’s final day of teachings at Tsuglagkhang, Dharamsala, HP, India on May 12, 2019. Photo/Tenzin Jigme/CTA