His Holiness the Dalai Lama watching students from TCV Choglamsar performing before his address to Tibetans of Ladakh in Leh, Ladakh, UT, India on August 7, 2022. Photo by Tenzin Choejor

Shewatsel, Leh, Ladakh, India, 7 August 2022: More than 6500 members of the Tibetan community living in Ladakh, including schoolboys and schoolgirls, as well as nomads from the Changtang (the Northern Plans) of Ladakh, gathered today at the Tibetan Children’s’ Village School in Choglamsar on the outskirts of Leh. They made His Holiness the Dalai Lama welcome with a series of performances of singing and dancing. In His Holiness’s address to them he harked back to the circumstances that led him and tens of thousands of Tibetans to seek refuge in India.

“One of the factors that triggered the Lhasa Uprising in March 1959 was the Chinese military authorities stationed in Lhasa having invited me to attend a show by Chinese performers who had recently arrived. I had agreed to go. However, as soon as the Tibetan public came to know the terms and conditions of the invitation laid down by the Chinese General in charge—that I should not be accompanied by any body-guards—they made it clear that they would not let the visit take place.

“By this time, Tibetans had completely ceased to trust the Communist authorities and had lost hope that circumstances would improve. Consequently, more than 10,000 Tibetans surrounded the Norbulingka Palace to defend it. In addition, they pleaded with me not go to the Chinese military camp under any circumstances.

“In the meantime, representatives of the Chinese military called upon my officials to tell them exactly where in the palace I was staying in order that they could avoid shelling that building should they feel bound to attack. This was a distinctly ambiguous request that reassured no one.

“Having sought advice from several sources, including mystical divination, I decided to leave the Norbulingka on the night of 17th March at around 10 pm. Before I left, I bade farewell to the protector Mahakala, whose statue stood in one of the prayer halls.

“Towards the end of our precarious journey to freedom, as we approached the border with India near Tawang, we received a message that the Government of India would make us welcome. It was such a relief to be met by Indian officials, some of whom I had befriended when I came to India to join the Buddha Jayanti celebrations in 1956.

“Although we were refugees coming into exile, we were treated as ‘guests of the people and Government of India’. Their kindness to us for more than six decades has been immense. We shall be forever grateful to them.” 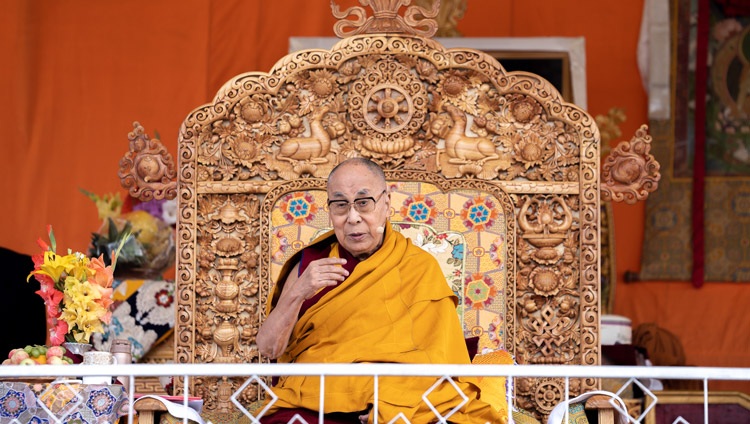 His Holiness quoted a verse from the Final Dedication Prayer of ‘The Great Treatise on the Stages of the Path to Enlightenment’ by Jé Tsongkhapa:

Whilst sincerely striving in the ten activities
Of the supreme vehicle, the Mahayana,
May I always be helped by powerful deities
And may an ocean of good luck spread everywhere.

His Holiness added that over all these years he has been guided by an aspiration that Tsongkhapa makes elsewhere in the same text:

Moved by great compassion, may I illuminate
The sublime precious teaching [of the Buddha] Wherever it has not spread before,
And wherever it has spread but has declined.

His Holiness described Tibetan people’s spirit as undaunted. He stated that their faith and trust in him is unwavering. What’s more, he said, Tibetans are close-knit and resilient in their approach to life.

“The people of the Himalayan region,” His Holiness went on, “share the same Buddhist cultural heritage with Tibetans. Because of their steadfast courage, Chinese communists are questioning their policy with regard to Tibetans. Among scholars and scientists, there is a great deal of interest in learning from our tradition, particularly with regard to what we understand about the mind and emotions, and the means to tackle destructive emotions.

“Times are changing and truth will prevail. There are indications that things will change for the better in China before long. Therefore, please remain strong and preserve your sense of brotherhood and sisterhood. Be cheerful and remain at ease.”

In conclusion, His Holiness said he was pleased to see so many young faces in the audience—an indication of the bright future that lies ahead. 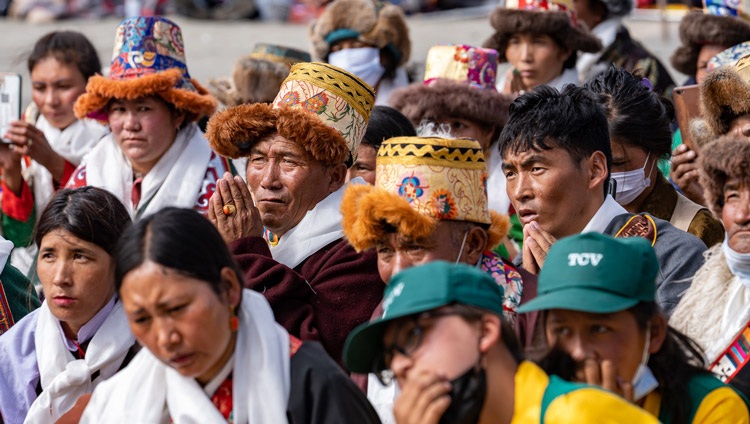 Some of the more than 6,500 members of the Tibetan community listening to His Holiness the Dalai Lama’s address at Tibetan Children’s Village School (TCV) Choglamsar in Leh, Ladakh, UT, India on August 7, 2022. Photo by Tenzin Choejor