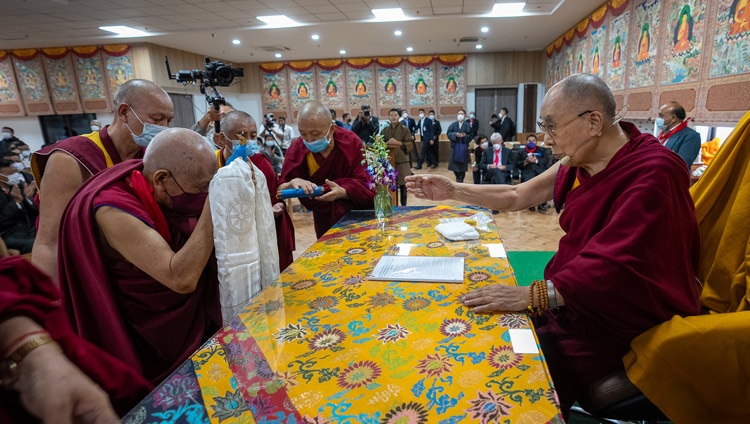 Ven Samdhong Rnpoche presenting traditional offerings to His Holiness the Dalai Lama at the start of the inauguration ceremony of the Dalai Lama Library and Archives in Dharamsala, HP, India on July 6, 2022. Photo by Tenzin Choejor

Thekchen Chöling, Dharamsala, HP, India, 6 July 2022: This morning, His Holiness the Dalai Lama’s 87th birthday, he attended a ceremony to inaugurate the Dalai Lama Library & Archives in a new building below his residence but above the Lha-gyal-ri circumambulatory path.

Once His Holiness had arrived and taken his seat in the new audience hall, Ven Samdhong Rinpoché made prostrations and offered him a mandala. Tea and sweet rice were served. Zumchung Tashi, Project Manager of the Dalai Lama Trust opened the proceedings. He welcomed the guests, who included the Ganden Tri Rinpoché and leaders of the Central Tibetan Administration and invited Ven Samdhong Rinpoché to introduce the Dalai Lama Library & Archives to the gathering.

Rinpoché began by paying respects to His Holiness, who he addressed as ‘My ordination Abbot’, and once again welcomed the guests.

“As Khedrup-jé said to Jé Tsongkhapa,” Rinpoché continued, “‘Since your every breath is for the benefit of all beings, what need is there to say more about your other enlightened activities? The very same applies to His Holiness.

“In the past, people memorised the teachings and could recite them by heart. However, now in this technologically more developed age, we can preserve His Holiness’s teachings in a digital format. Some records may be incomplete, but we will endeavour to restore them. There are also many books by and about His Holiness in languages other than Tibetan and English which we intend to archive.

“The objective of this Library is to preserve His Holiness’s teachings so that people can have access to them. Teachings of previous Dalai Lamas will also be archived. The various awards presented to His Holiness will be collected here and put on display. Altogether the intention behind this project is assemble resources for those who wish to research His Holiness’s life and work. We have been able bring it this far due to the kind support of His Holiness the Dalai Lama.

“In addition to gathering resources together, we also plan to convene seminars and meetings with people who have a special connection with His Holiness. We have good equipment and well-trained staff to operate it to link up with other people around the world.

“We have observed the rules and regulations laid down by the Dharamshala Municipal Corporation and we thank them for their help and support.

“It is important to preserve documents in a scientific, technologically advanced way, bearing in mind how in the past people were able to take advantage of us because our records and documentation were incomplete. During the tenure of the 12th and 13th Kashag’s an attempt was made to create an archive, but it didn’t come to fruition.”

Rinpoché concluded by pointing out that construction of this archive building, as well as accommodation for staff of His Holiness’s Office, began in 2017, was interrupted by the Covid-19 pandemic, and resumed in 2020. He prayed that whatever merit had been created be dedicated to His Holiness’s long life. 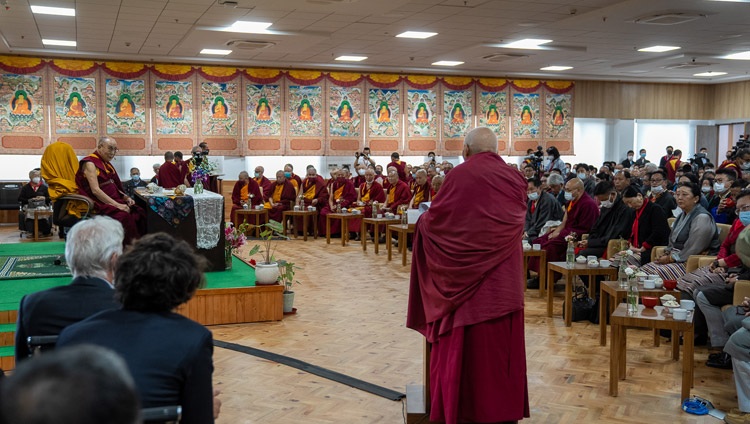 Ven Samdhong Rinpoche introducing the Dalai Lama Library & Archives to the gathering during the inauguration ceremony in Dharamsala, HP, India on July 6, 2022. Photo by Tenzin Choejor

As he addressed the gathering, His Holiness chuckled and said: “On my birthday, everyone smiles happily and chants ‘Happy Birthday to You’. I’d like to thank for being cheerful today during this critical time for our nation. Since I bear the title ‘Dalai Lama’, I’ve done what I could to contribute to preserving Tibetan religion and culture.

“At a certain point the whole question of Tibet seemed about to vanish like a rainbow, but we set up schools and re-established our monasteries so that today Tibetan culture, religion and language thrive in exile.

“When I first went to the US, I was invited to visit the Congress. One of the members asserted that China has millions of soldiers, while the Dalai Lama is just one man, but they can’t overcome him. The point is, we have never told lies; we have the truth on our side.

“For years, I’ve worked sincerely, respecting the law of causality. The issue of Tibet is not just a political matter, it’s a question of truth.

“When we talk about our culture, it mostly concerns the workings of our mind and emotions. It’s focused on ways to achieve peace of mind. We don’t just make wishes to deal with our destructive emotions, we have techniques to defeat them. We have to observe which of our emotions disturb our inner peace, and having identified anger, jealousy and so forth we must work to counteract them.”

His Holiness revealed that people today, scientists among them, take an interest in Tibetan culture because they recognise that it is dedicated to fostering ways to achieve peace of mind. He pointed out that at the very start of a Tibetan monastic education students learn about the mind and mental factors. Later, he continued, they take a rational approach to the scriptures, examining which can be considered definitive and which are in need of interpretation.

“For thousands of years India has upheld the principles of ‘karuna’ and ‘ahimsa’, His Holiness went on. In Tibet we preserved these practices as they were taught by the scholar-adepts of the Nalanda Tradition. We are living in exile, which on the face of it is a sad situation to be in, but as a result interest in our traditions has spread throughout the world.

“The 13th Dalai Lama spent time in both India and China. He made changes in Tibet, but was not very effective in making Buddhist philosophy known beyond our borders. I’d like to thank the Tibetan scholars and adepts of today who have done so much, teaching from our traditions, to contribute to the well-being of humanity.

“In our early days in exile, when we set up schools for Tibetan children with Prime Minister Nehru’s help and support, we appointed religious teachers to teach them. Later, we renamed them ‘philosophy instructors’, so later generations of students in exile have grown up with some understanding of philosophy and an appreciation of the importance of using reason and logic.

“Today is my birthday and you’re all in a cheerful mood despite the heavy rain we’ve had. Let me tell you a story. On one occasion Nechung referred to me as like a ‘water-crystal jewel’. I was born in the region of Siling. I studied in Lhasa and came into exile in India. What I learned along the way was how to train the mind, which is something I’ve been able to share with others. So, it seems that Nechung’s prediction about the light of the ‘water-crystal jewel’ illuminating the world has come true.” 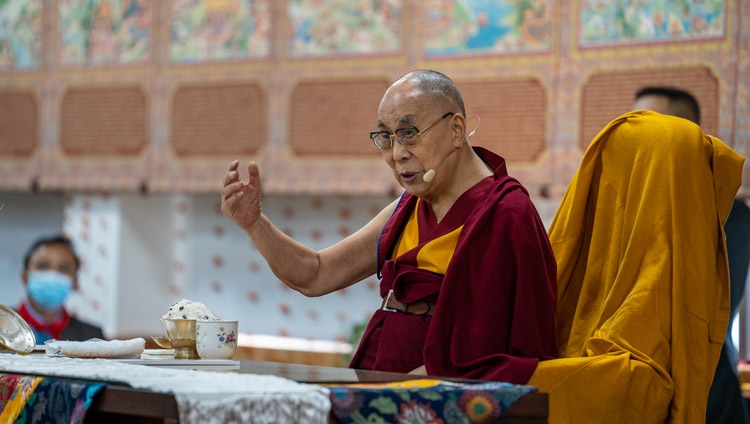 His Holiness the Dalai Lama addressing the audience during the inauguration ceremony of the Dalai Lama Library and Archives in Dharamsala, HP, India on July 6, 2022. Photo by Tenzin Choejor

Next, His Holiness presented the architect, engineers, site supervisor and others who were actively involved in the construction of the Library and Archive building with a symbol of gratitude and certificate of appreciation.

Secretary of the Dalai Lama Trust, Jamphel Lhundup, offered words of thanks.

“We are most grateful to His Holiness the Dalai Lama for inaugurating this Dalai Lama Library & Archive on this special day, Wednesday 6th July, which is his birthday.

“I’d like to thank Ven Samdhong Rinpoché for his introductory remarks and express the Trust’s gratitude to all our guests for attending this occasion today. Thank you all for coming.

“I pray to His Holiness to care for us until we attain enlightenment under his protection.

“This project has taken five years to bring to completion and it’s a great joy for me to thank everyone who has contributed to it.”

Before the event came to an end, His Holiness spoke to the gathering once more.

“Although we are living in exile,” he told them, “we are not like other refugees. We have a vast and profound tradition, appreciation of which has now spread far and wide.

“When we first came to Dharamshala from Mussoorie we were disappointed to be so far from Delhi. But then, Appa Pant, former Political Officer for India to Sikkim, visited me at Swarag Ashram. Looking out over the distant view he said, “It’s very good that you’ll stay here from where the light of your words about kindness and compassion will spread throughout the world.

“This has occurred not just because of me, but because of the dedication of Tibetans inside Tibet, as well as in exile. They have worked hard to follow my advice. So, I’d like to thank all Tibetans for what we have achieved. I will live for another one or two decades and feel I still have something to contribute.

“Once the pandemic subsides, I’m looking forward to going to Delhi to hold discussions with educationists about how we can make education more complete by combining a modern approach with an ancient Indian understanding of the workings of the mind and emotions.

“Mahatma Gandhi made the idea of non-violence well-known but now we need to make people similarly well-acquainted with compassion.

“Since it’s my birthday, I’m going to have a good meal and then take a good rest. Please keep up your courage, work together, and do your best.” 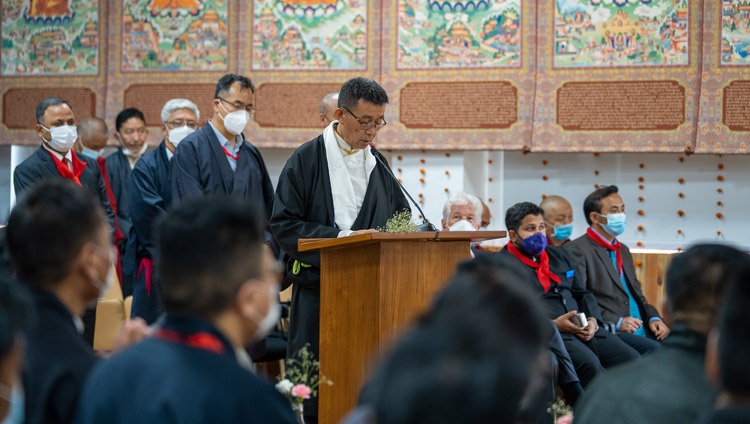