High-Tech Repression of People of Faith in China: Geneva Forum 2019 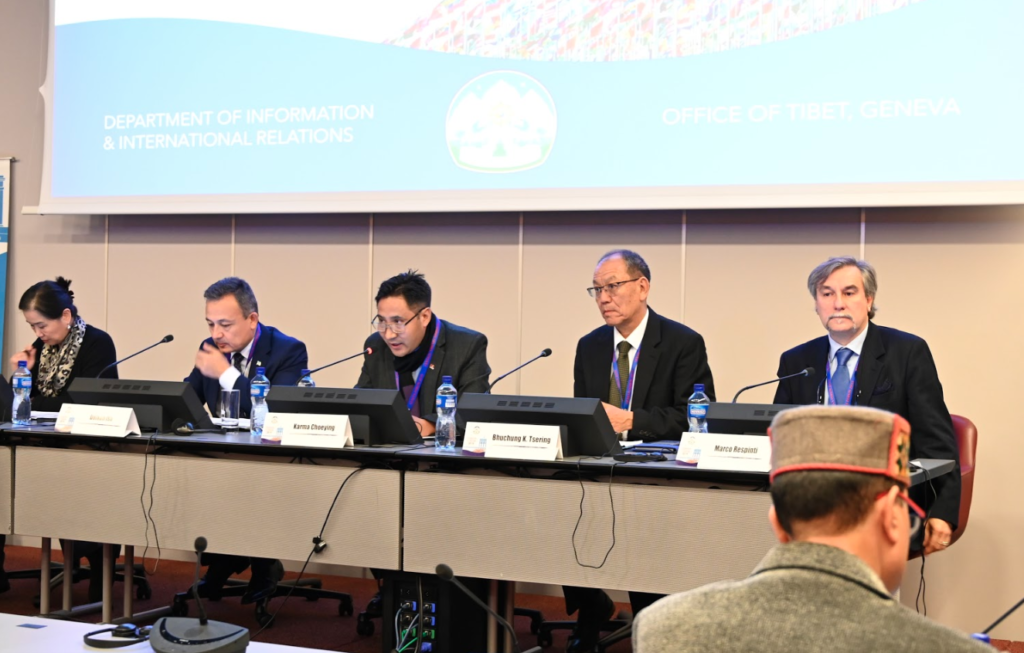 Geneva: The Geneva Forum 2019 on China’s High Tech Repression and Freedom of Religion convened the second panel of experts to review ‘High-Tech Repression of People of Faith in China’.

Speaker Bhuchung K. Tsering, Vice-President of International Campaign for Tibet began his presentation with a basic introduction to Tibetan religion identity in order to dig deeper into understanding the repression of Tibetans. Secondly, he explained how China has been adopting its policy on Tibetan religious identity by transforming Tibetan Buddhisms into Chinese Tibetan Buddhism. And thirdly, based on the reviews he laid down a few recommendations for the international community.

“Religion is at the very heart of Tibetan identity. In the early stage of Tibetan resistance to Chinese Communist’s invasion of Tibet, there was a resistance group that was set up called ‘voluntary force for the defense of faith’. That shows the importance that the Tibetan people place on religious identity” said Mr. Bhuchung. He noted that this religious identity encompasses the teachers- student’s relationship as he explained that Tibetan Buddhism’s core issue is about the transfer of philosophy from the teachers to the students. And in order to do that the teachers must have the freedom to teach and the students must have the freedom to receive the teaching. He stagnantly noted all these have to be in the framework of the Tibetan Buddhist governance system one that is primarily, centrally and completely run by Tibetan Buddhist practitioners and not by non-Buddhist communists authority.

“Now, what has China been trying to do? Overall in the initial stages, China tried to destroy Tibetan religion that includes physical destruction of monastic institutes, disrobing monks and nuns, destroying monastic structure where the recognition of the tulku system was not allowed” he attested and claimed that they were meant to replace Tibetan Buddhism with Communism. However China’s policy, unfortunately, did not succeed as he recounted the account of the 1980s when there was a brief policy of liberalisation.

“Tibetans once again revived their spiritual identity and one could see that even under the restrictive system Tibetans once again started to revive Buddhism. Therefore, the Chinese realised their policy was not working so they altered their policy” he added. He further mentioned that China has now changed its policy from destruction to control of Tibetan Buddhism citing one notable example of the case of Panchen Lama. Chinese authority who previously had no interest in the reincarnation howsoever is now embracing the reincarnation but to use it for its own advantage while rejecting His Holiness the Dalai Lama’s recognition of Panchen Lama with a replacement of their own selection. This is China’s blatant pursuit to control Tibetan Buddhism.

Mr. Bhuchung went on to explain the strategic ways of China’s control of Tibetan Buddhism by highlighting China’s traffic control system to monitor the people’s movement. Patriotic reeducation as a popular method to control Tibetan Buddhism to make it into Chinese Tibetan Buddhism.  Meanwhile, controlling Tibetan Buddhist activities through search engines like the one they have created in Tibetan like Yongzin. People’s movement is also heavily curved by the use of drones at the border area so that people who were able to escape previously are now no longer able to do so.

“If you look at this high-tech suppressive method what can be done? We need to find ways that U.N and international communities can talk about such usage of high-tech suppression methods. There are two basic ways that U.N and international communities can do. First, we can try and put the Tibetan issue into the discussion of the U.N’s debate on digital surveillance. Secondly, there is something called less-lethal weapon related equipment guidelines where we can put Tibet issue in their discussion” recommended Mr. Bhuchung.

At the political front, he suggested that the governments and the U.N should strongly support the Tibetan Buddhist system of finding their own reincarnation including that of the Dalai Lama in the ways Tibetans have traditionally done. Since the U.S has already come out with the statement which clearly states that the Dalai Lama and the Tibetans Busshists have the sole authority to decide on Tibetan Buddhist reincarnation, Mr. Bhuchung Tsering pressed the need for the U.N as well as governments throughout the world to openly support the same.

Speaker Annie Yang a Falun Gong practitioner narrated the account of her personal ordeal when she was arbitrarily arrested by a group of Chinese men who took her to the local detention center where she stayed for 40 years after which she was taken to a forced labor camp. At the labor, she was forced to denounce her Falun Gong beliefs and practices. Other repressions she faced at the camp include lack of good and water, sleep deprivation, and watching videos that slander Falun Gong, etc. “In one way they tortured me physically and mentally, and in another way, they tracked my body every 3 months. I was quite confused until I realised later they were organ harvesting of Falun Gong practitioners” she attested.

In terms of high-tech surveillance, she explained that the ID card is inserted with a chip to monitor the movement. There is a mobile monitor where even if there is no battery in the cell phones, the authority can still tap the conversations. According to a report by the Wall Street Journal, young students were forced to wear a band on their heads which acts as artificial intelligence to depict the student’s concentration level.

“The Communist party’s objective is to use high-tech to control people in every aspect including their living, eating, thinking, and emotions. They just want to destroy people’s beliefs. I think the only way to protect religious belief is to disintegrate the Chinese Communist Party and more pressure from the international community is needed” asserted Mrs. Yang.

Speaker Dolkun, President of World Uyghur Congress Isa spoke on how the Communist Party of China when it comes to human rights violations keeps on changing their narratives to persecute Uyghur people renaming concentration camps as vocational training centers. Uyghurs detained in these concentration camps have no charges of any crime or given a fair trial either. Recounting his personal experience, Dolkun said he now lives in exile being the voice for those voiceless Uyghurs back home. But his humanitarianism work came with a price as he is separated from his family certainly never to meet again for a long time.

“In this time of day communication is not an issue at all. In China, there are cameras everywhere and high-tech internet yet I don’t know if my 98 years old father is still alive or not. Far from protecting my family, I could not get any information regarding my family” said Mr. Dolkun.

Speaking further, he pointed out the shifts in the strategy of Chinese authority in the persecution of Uyghurs. He mentioned that everything that stands uniquely about Uyghurs is targetted by the Chinese authority including their language, religion, and culture, etc.

Today East Turkistan has become one of the most heavily guarded areas by policemen. Recently China started a new medical program called ‘physical for all’ where they examine the DNA, Iris, and blood samples of the Uyghurs to collect their personal data. Police checkpoints are heavily stationed after each short distance and currently, there are around 960 estimated police checkpoints in East Turkistan to control the movement of people. Mr. Dolkun further noted that China now plans to establish a Xinjiang style surveillance system across the country. He spoke on other strategies adopted to repress Uyghurs such as through ‘ intrusive home visits’ and forced marriages.

Finally, Speaker Marco Respinti, Director in charge of Bitter Winter highlighted the strategic use of modern technology such as advanced artificial intelligence, facial recognition, DNA sampling, biometric, intrusive mobile apps by the Chinese authority to control and repress Tibetans, Uyghurs and other people of faith in China. 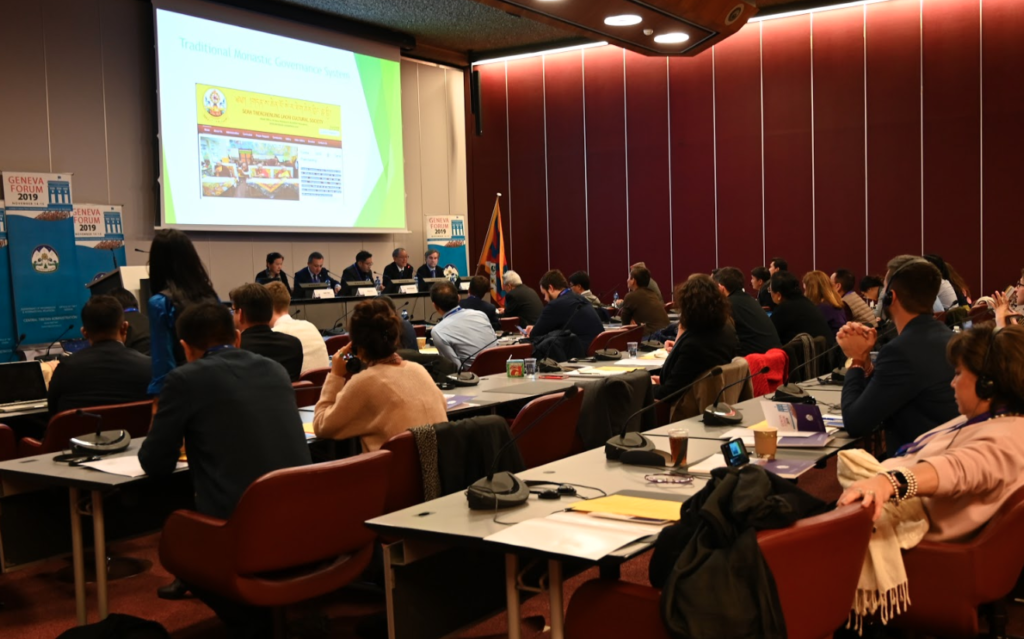 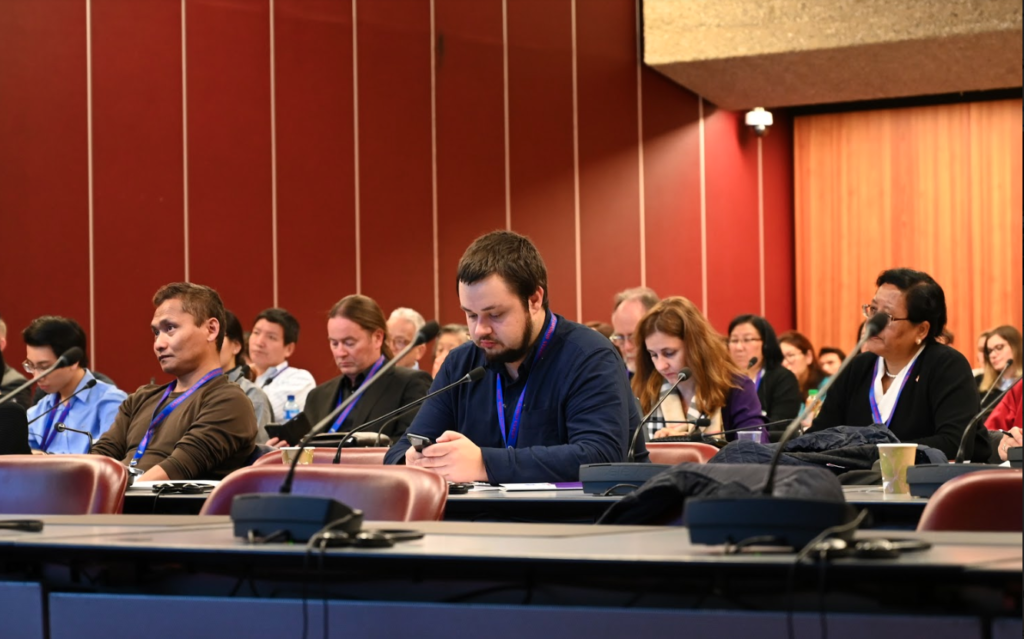 Participants listening to the panelist at Geneva Forum 2019 on China’s High Tech Repression and Freedom of Religion. Photo/Tenzin Nyishon/Switzerland