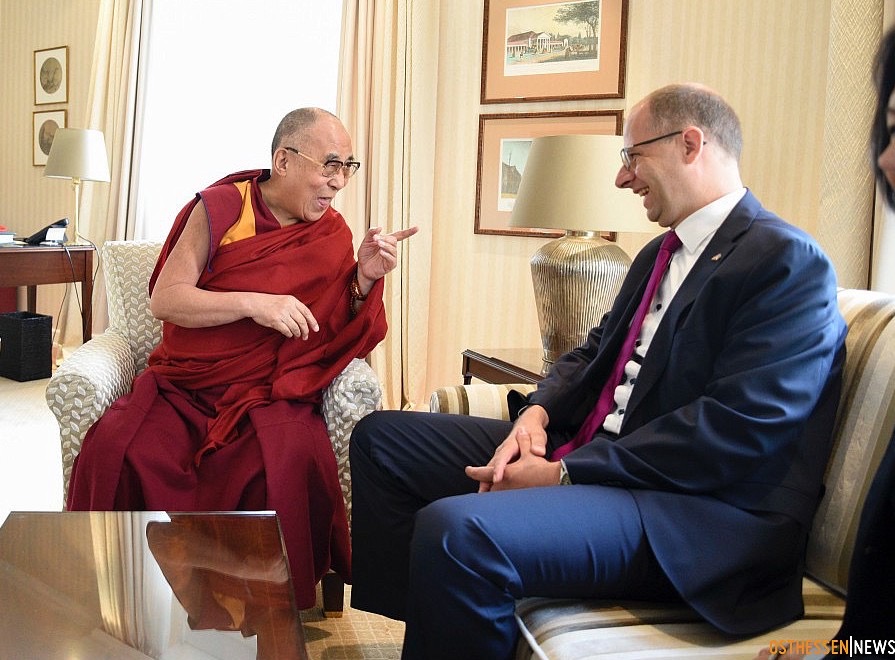 Michael Brand with His Holiness the Dalai Lama during a private audience in Germany, 2015. Photo credit -Christian P.Stadtfeld & Osthessen.news

Geneva: On the occasion of the 87th birthday of His Holiness the Dalai Lama, Nobel Peace Prize Laureate and spiritual leader of Tibetans all over the world, the Chairman of the cross-party parliamentary group Tibet in the German Bundestag, Michael Brand MdB, stated:

“Not only the Tibetans in Tibet and around the world, but also hundreds of millions of people worldwide respect the spiritual leader of the Tibetans and his “Middle Way” approach, which has been aimed at peace, reconciliation and compromise for many decades, with which Dalai Lama and the Tibetan leadership, despite the violent Chinese aggression against Tibet, are trying to bring about a settlement between the thousands of years old, independent culture of the Tibetans and the communist regime in China. This attitude and approach deserve the support of all free countries and societies worldwide.

Given their very special contribution to global understanding and tolerance, the Tibetans and their political leadership are a natural partner for Germany and the principle of a value-based foreign policy endorsed by our country. The Federal Government and, above all, the self-declared representative of a value-based foreign policy, Foreign Minister Annalena Baerbock, are called upon to recognize the position of the Tibetans and, above all, the extraordinary and charismatic personality of the Nobel Peace Prize winner as a spiritual partner and not, out of fear or opportunism, to a do a political or economic kowtow to the notoriously brutal regime in China. We wish His Holiness the Dalai Lama, the Tibetans entrusted to him, and all friends of peace and Tibetans worldwide that the Dalai Lama has many more good years ahead of him and for his beneficial work. We wish the spiritual leader of the Tibetans a wonderful day of honor and health, strength and blessings for the future” said Chairman of the cross-party parliamentary group Tibet in the German Bundestag, Michael Brand MdB.

In addition, the German government’s Commissioner for Human Rights Ms. Luise Amtsberg wished His Holiness the Dalai Lama as well on her official twitter account. She thanked His Holiness for his tireless commitment to dialogue on religious and cultural freedom. She further stated “my thoughts are also with the many people in Tibet who do not get recognition for their commitment, but repression”.