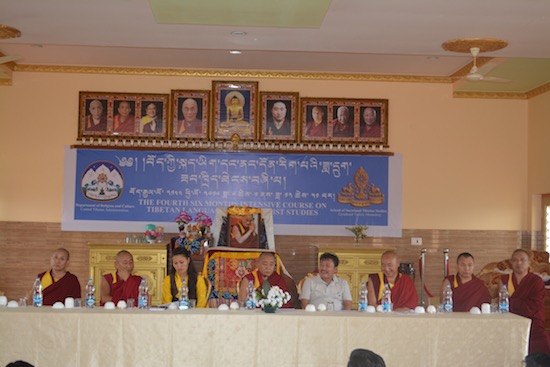 Dignitaries at the inaugural session of the six-month intensive course on Tibetan language and Buddhist Studies at Snowland school, Gyumey monastery on 1 July 2017.

HUNSUR: The fourth six-month intensive course on Tibetan language and Buddhist studies for Tibetan college students began today at Gyumey Monastery’s Snowland School based in Hunsur, Karnataka state. The course is jointly organised by the Department of Religion and Culture, and Gyumey monastery since 2014.

The inaugural session of the six-month intensive course was attended by Gyumey monastery’s chant master Geshe Wangdu and Mr Rigzin Dorjee, settlement officer of Rabgyeling Tibetan settlement, Hunsur. In their inaugural addresses, they spoke about the importance of preserving Tibet’s rich religious, cultural and linguistic heritage.

Ms Tenzin Dadon from the Department of Religion and Culture, Dharamshala, gave the introductory remarks of the six-month intensive course.

A total of 15 Tibetan college students have applied to take part in the course. However, only eight were actually able to participate due to legitimate concerns and unforeseen circumstances.

The six-month course, from July to December, will primarily focus on basic Tibetan grammar, Tibetan religious history, Buddhist dialectics, Buddhist philosophy, etc. The participants will also be given a course-completion certificate after clearing a test at the end of the programme.

The Snowland school for Tibetan studies was formally inaugurated on 7 December 2011. It was established after His His Holiness the Dalai Lama’s recommendation during his visit to Gyudmed monastery in 2007, to begin a school specially designed to meet the needs of students wishing to study Buddhism and Tibetan culture in India, the school’s website says. 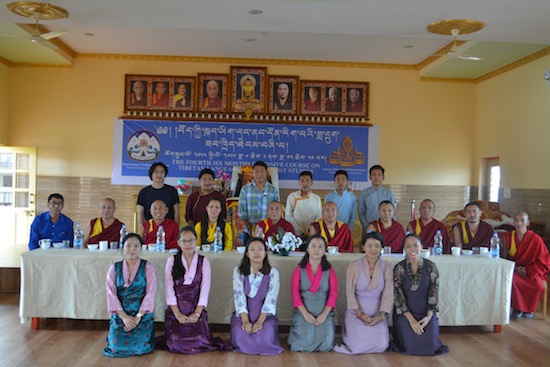 A group photo of the participants, resource persons, and dignitaries.