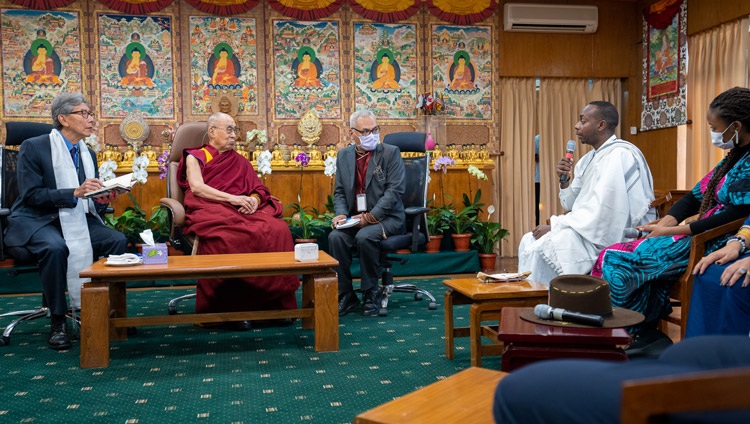 Mohamed from Somalia sharing his experiences on the first day of dialogue with United States Institute of Peace (USIP) Youth leaders at His Holiness the Dalai Lama’s residence in Dharamsala, HP, India on September 22, 2022. Photo by Tenzin Choejor.

Dharamshala: When His Holiness the Dalai Lama entered the audience room at his residence this morning to meet young leaders and peace-builders from the United States Institute of Peace (USIP), he carefully scanned their faces and warmly wished them, “Good morning.”

David Yang, Vice President for Applied Conflict Transformation at USIP, as the moderator announced that this was the seventh interaction between His Holiness and USIP delegates. He explained that today and tomorrow His Holiness would engage with 26 young leaders from 12 conflict-affected regions. He mentioned that over the last two years the meeting had taken the form of an online virtual dialogue, but that they were now happy to be back in person.

Part of the young leaders training has involved story-telling and Yang made clear that they wanted to share with His Holiness how children of war can become leaders for peace. There would be four themes: belonging, compassion, inner peace, as well as equality and justice.

Kuol from South Sudan, who is using his bitter experience of being a child soldier to build peace and make sure no child carries guns at a tender age, opened the conversation. He spoke of the time when war was at its peak in his country, when there were no men left in the villages, only women and children. Whenever a family had two boys, one was taken to become a soldier. Now he wants to give them access to education and other opportunities.

Ruby from Syria realized that achieving peace requires anthropological and ethnographic sensitivity and studied accordingly. She has been working on projects related to peace-building, justice, women’s rights, and climate issues. She talked about her realization that men and women are equally capable, but both need to be powerful and strong.

Angela from Colombia is a psychologist who has focussed on non-formal education methodologies, workshops, leadership and soft-skills development with teenagers and adults. She too stressed the need for people in conflict affected areas to be strong and brave, and to become part of the solution.

Okash from Somalia, whose work focusses on social innovation, education, employment and entrepreneurship as tools for eradicating poverty and building sustainable peace, spoke of a turning point when he encountered two men with guns. One was a former classmate. He resolved to become an educator to impart skills that would enable such people to get jobs and contribute to building a peaceful Somalia.

Mojisola from Nigeria actively engages in the fields of gender, peace-building and human rights. She facilitates workshops on women, youth, peace and security, using story-telling, role play and dialogue. She described the troubles her mother faced and her efforts to create a club for women to support each other and help each other withstand prejudice and pressure.

Leonardo from Colombia works in the arts, alternative development and constant learning. He has brought together former FARC combatants and ordinary citizens through the exchange of hand-written letters. Finding himself alone in a school room brought home to him the importance of ensuring that no one feels left behind or left out. It is important, he says, to make sure people feel they belong.

Responding to the first set of presentations, His Holiness declared:

“We have to make an effort to create a more peaceful world and a happier humanity. We can identify differences between us in terms of race, nationality, and religion, but we would be better instead to think of humanity as a whole. We all have equal rights. We are all born from a mother and most of us drink her milk. We depend on her kindness from the start of our lives. Warm-heartedness is an appropriate response.

“Modern education tends to focus on material goals rather than inner values. It seems to encourage a sense of ‘us’ and ‘them’, instead of emphasising that we are essentially the same and we have to live together.

“Each of us has two eyes, one nose, one mouth. If one of us were to have three eyes, that would be a surprise. If we examine our brains, they are equally complex. Therefore, we have to encourage a strong sense of brotherhood and sisterhood.

“As I said we’re all born the same way, and in the end we all die the same way. When that happens, it’s not ceremony that’s important, but whether we have the warm affection of relatives and friends around us. As I told former Prime Minister Manmohan Singh, I expect to live another 15 or 20 years, but when I die, I’d prefer to be free and surrounded by friends in India not hard-hearted Chinese Communist officials.

“Freedom is important in our lives. We need to be free to be able to exercise our brains, to be able always to ask, “Why?” From this point of view totalitarian systems are wholly unfavourable. It’s freedom that fosters warm-heartedness and compassion, which in turn lead to inner peace. When you’re warm-hearted there’s no basis to be afraid. Fear is bad for the mind and too easily leads to anger. And anger is the real foe of peace of mind.

“I practise compassion, so wherever I go, I smile and feel happy. As human beings we have to find how to live together in peace.”

Questioned about what makes a good leader, His Holiness stressed the advantages of elected leadership. Asked how to overcome anger, he suggested examining the circumstances that prompt those who make you angry to do so. He recommended taking a wider, longer-term view. Invited to suggest how men and women can learn to live together, he simply observed that men need women and women need men, and everyone laughed.

A second set of story-tellers spoke about compassion. Sebastian Ernesto Ruano Rodriguez from Colombia, who has contributed to issues of peace-making, problem solving, government and strengthening democracy in different parts of the world, recalled confronting a combatant. He described how his own hostile feelings dissolved when a small girl appeared and his opponent picked her up and hugged her.

Helina from Ethiopia, who wants to make a difference by empowering young leaders to participate in peace projects and reduce risk and inequity in vulnerable communities, suggested that to bring about change, we have to appreciate humanity.

His Holiness intervened to voice his well-known admiration for the spirit of the European Union (EU). He remains impressed that after centuries of conflict between France and Germany, following the Second World War Adenauer and de Gaulle founded the EU. Since then, there has been no violence among the Union’s members. He suggested that the rest of the world would do well to follow this example in pursuit of peace. What’s crucial, he said, is to achieve inner peace, but you can’t buy peace of mind in a shop. It’s not something that can be produced in a factory.

Anna from Venezuela reported her indignation at seeing tanks on the streets of her country. She challenged them with only a wooden shield for protection. She felt quite alone, distressed to see so much destruction. Once back in a safe place she asked herself how this could happen and is now dedicated to helping young people, especially women, work to build peace.

Wonderful, His Holiness replied. We all want to be happy and to live in peace. But we have to work for it taking the whole of humanity into account.

“We need to aim for a completely demilitarized world,” he added. “I’m from Tibet where Chinese Communists have everything under tight control. But the Tibetan spirit is strong and we have preserved the Nalanda Tradition. Instead of relying on guns, we cultivate compassion. Six million Tibetans put their faith in what the Buddha taught about forgiveness and compassion.

“And because climate change is so serious, we must also pay attention to ecology.”

Denis from South Sudan works as a journalist reporting on the environment and peace-building—including water management, pollution, and climate change. He reported that he has seen so many violations of human rights, but what inspires him is the example of people like Martin Luther King Jr, Nelson Mandela and Mahatma Gandhi who worked to create peaceful societies free from hatred and grief.
Paska, also from South Sudan, speaks about social issues with specific focus on peace, gender, culture and history. She is trying to transform lives through evidence-based advocacy and campaigning for peaceful change. When conflict broke out in 2013, she crossed the border into Uganda and met an old man who told her how he felt he’d always been running away. When she returned, she was very moved by the story of a woman beaten to death by her brother for refusing to marry a man her family had chosen for her. She felt a strong need to do something about it—not to run away any more. She is determined that women and girls should have a choice.

Noral from Nigeria, recalled his ninth birthday, when his mother had prepared his favourite rice dish for him. That very day three men broke in and raped and murdered his mother in front of him. He described how hard it is to get over what happened even 20 years later, but he is committed to seeing that women are no longer subject to violence and rape.

Responding to David Yang’s asking how he has been able to sustain compassion in his own life, His Holiness declared:

“I believe that as human beings we are all fundamentally compassionate. We have to build a world founded on human values—a demilitarized world, a world no longer dependent on the use of weapons. When people fight and die, their minds are not at peace, but we can imagine building a world based on compassion.”

Asked what qualities are required to bring about peace, His Holiness remarked:

“I’m a Buddhist and as soon as I wake every morning, I remind myself that all human beings are the same as me—we all want to be happy. I resolve to use my life to ensure that other beings are happy. It’s compassion that brings about peace of mind, not anger and hatred, so we need to focus on the whole of humanity as being our brothers and sisters.”

His Holiness recommended putting negative experiences behind us and setting positive goals. He said it’s possible to teach people to be more compassionate because we all have a seed of compassion from the start of our lives—we just have to nurture it. The key factor is to cultivate warm-heartedness.

David Yang summarized a session that had touched on belonging and the warmth of family and community bonds.

“I’m honoured to be meeting with people who have their future ahead of them,” His Holiness remarked. “How we live from day to day affects our future. I repeat, warm-heartedness is the key factor. I think about it always because it’s warm-heartedness that brings us peace of mind. See you tomorrow.” 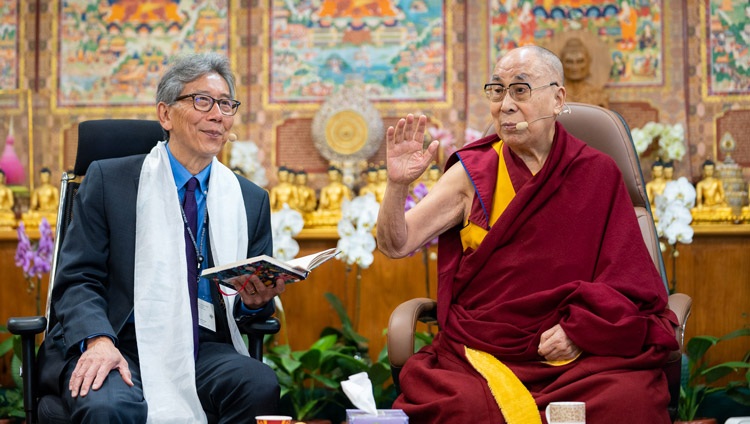 David Yang, Vice President for Applied Conflict Transformation at USIP, listening to His Holiness the Dalai Lama responding to the first set of presentations on the first day of dialogue with USIP Youth leaders in Dharamsala, HP, India on September 22, 2022. Photo by Tenzin Choejor. 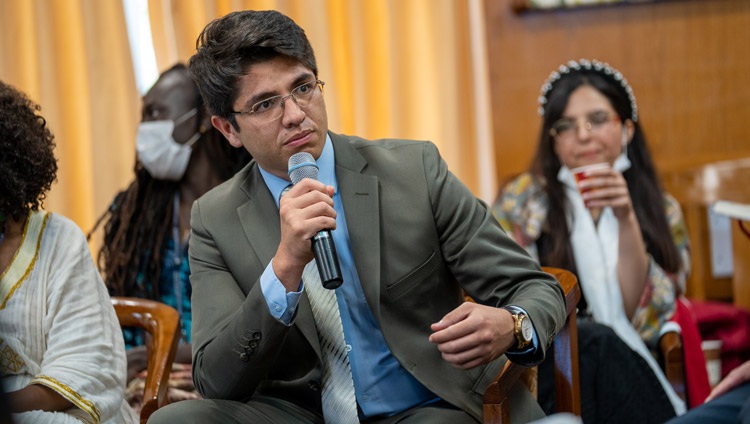 Sebastian from Colombia sharing is story on the first day of dialogue with United States Institute of Peace (USIP) Youth leaders at His Holiness the Dalai Lama’s residence in Dharamsala, HP, India on September 22, 2022. Photo by Tenzin Choejor. 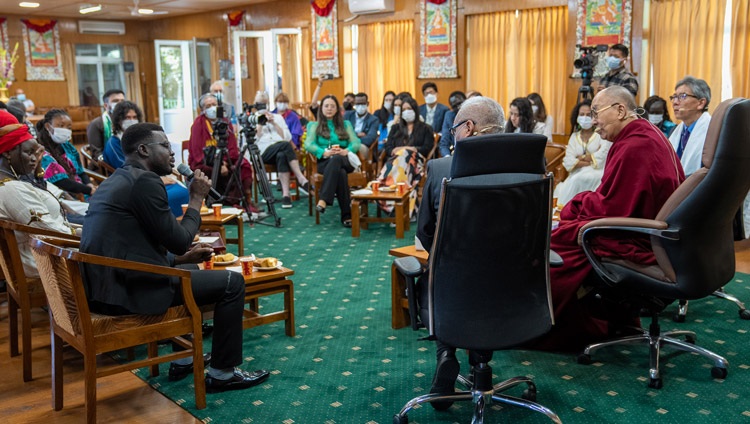 Denis from South Sudan delivering his presentation on the first day of dialogue with United States Institute of Peace (USIP) Youth leaders at His Holiness the Dalai Lama’s residence in Dharamsala, HP, India on September 22, 2022. Photo by Tenzin Choejor.