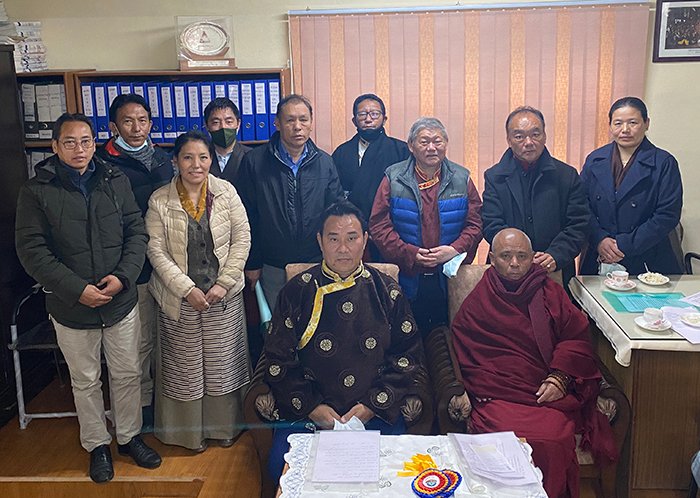 Dharamshala: The Central Council of Tibetan Medicine (CCTM) marked its 17th Founding Anniversary with the inauguration of the council’s office on 5 Jan 2021. The Chief Guest at the program, Kalon Choekyong Wangchuk of the Department of Health (DoHe), inaugurated the new office of the council at the Department of Health (Central Tibetan Administration), Gangchen Kyishong.

The special guest at the program, Deputy Speaker Acharya Yeshi Phuntsok of the Tibetan Parliament-in-Exile, virtually launched a book on Tibetan medicine compiled by the CCTM. In his address, the Deputy Speaker greeted the guests present there on behalf of the Tibetan Parliament-in-Exile and spoke on Tibetan medicine which has been a major Tibetan science of studies for centuries. With the blessing of His Holiness the great 14th Dalai Lama, Men-Tsee-Khang (Tibetan Medical and Astro. Institute) was one of the institutes that follows the rich tradition of the Sowa Rigpa or Tibetan medical system to be established first in exile almost sixty years ago. Followed by establishment of Chagpori Tibetan Medical Institute, Central Institute of Higher Tibetan Studies (CIHTS), Solan Menriling Tibetan Medical institute, the Central Institute of Buddhist Studies in Ladakh, and addition of Sowa Rigpa course in Namgyal Institute of Tibetology in Gangtok recently. Tibetan medical practitioners have also increased with the establishment of aforesaid institutes of Tibetan medicine in India and across the world.

In order to standardise the Tibetan medical system, an Act for the Central Council of Tibetan Medicine (previously known as ‘Tibetan Doctors’ Association’) was passed by the Tibetan Parliament-in-Exile, then called Assembly of the Tibetan People’s Deputies, in 2003. It has been 18 years since the passage of the Act for the CCTM and 17 years after the establishment of the CCTM. In these periods the council had also seen downfalls which led to extensive debates and discussions on its continuation in the Parliament, followed by formation of two consecutive committees. Deputy Speaker Acharya Yeshi Phuntsok who was one of the members of the second committee formed by Parliament, recalled his working experience with the other two committee members; Parliamentarian Karma Yeshi, and late Dr. Pema Dorjee.  The second committee had worked extensively for six months and classified a series of questions to Health Kalon, Men-Tse-Khang Director, and others on the continuity of the council and presented a report on the same to the 15th Tibetan Parliament-in-Exile.  The report proposed for some small rectification on the frame of the council and asked for financial support from Kashag through the Department of Finance. Since then, the council has had many members for the past 6 years since 2015.  The rules and regulations of the council are also approved and passed by the Tibetan Parliament-in-Exile which need to be abided by all the CTA offices, individuals, or originations.

The success of the CCTM must be credited to the combined effort of all the members of the council. It is important for the council to work as per the objective of the passed rules and regulations and of the committees. The Deputy Speaker further said that he has been serving at the council as an advisor for the past many years at their request which enabled him to be well-informed of the working of the council. Speaker of the Tibetan Parliament-in-Exile attended the 6th conference of CCTM in Delhi and delegations of the Standing Committee of the Tibetan Parliament have also attended numerous council meetings. All the requirements and facilities are provided, starting from passing of Act in the Parliament to taking its responsibility by the Kashag, and followed by consecutive conferences. In the first conference, there was a large number of participants which decreased significantly in the following conferences. In 2019, the Deputy Speaker attended the 6th conference organised by the CCTM held in Delhi as an advisor which had very few participants, therefore he advised the council on the need for serious observation as there are more than 500 registered Amchis (Doctors). He further advised on safeguarding the council so that it will not have to seek help from the Kashag and the Parliament again.

Under the Central Council of Tibetan Medicine, there are private as well as public organisations which should utilise the rich tradition of Sowa Rigpa for the benefit of people rather than serving the interest of earning profit or for competition. The uniqueness of Tibetan medicine system requires inner purity, devotion, respect, and trust from the patients to completely eradicate the ailment. Unlike modern medication which helps only in providing temporary relief from ailment. Similarly, the Deputy Speaker advised the Tibetan medical practitioners to publish articles to expose misuse of  Sowa Rigpa by the Chinese Communist Party and approach the Indian leaders.

While Kalon Choekyong Wangchuk lauded the newly inaugurated office of CCTM and reaffirmed Kashag and especially DoHe’s support for the Sowa Rigpa. DoHe has facilitated the CCTM with the best office and advised for the collective contribution in the functioning of the CCTM. He further spoke on the importance of following His Holiness the Dalai Lama’s advice on the council’s functioning.

The 17th Founding Anniversary of the Central Council of Tibetan Medicine was also attended by Parliamentarian Dawa Phunkyi, Administrator of Tibetan Delek Hospital; DoHe Secretary Palden Dhondup; DoHe Add’l Secretary Jampa Phuntsok; Director Tsering Tashi of Men-Tse-Khang; and other guests. The 17th Founding Anniversary of the CCTM concluded with a thank you note by Amchi Tsering Tsamchoe, the Chairperson of the CCTM. 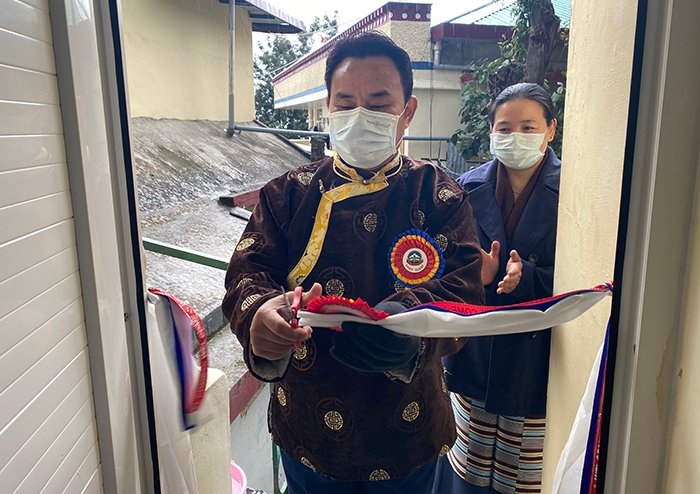 Health Kalon inaugurates the office of the Council at the Department of Health, also joined by Council Chairperson Dr Tsering Tsamchoe. 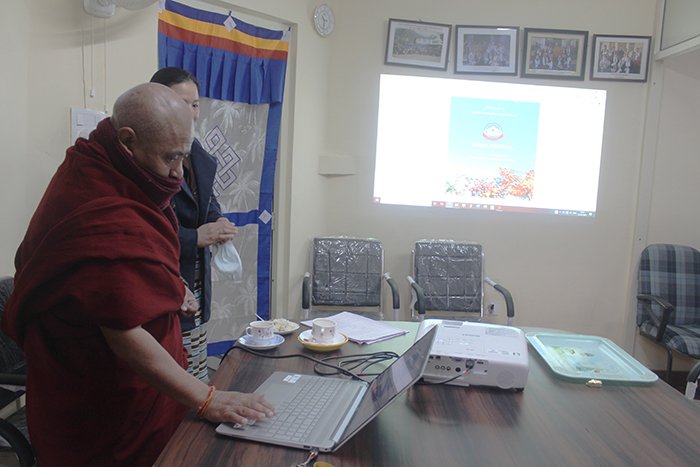 Deputy Speaker virtually inaugurates a book on Tibetan medicine compiled by the CCTM. 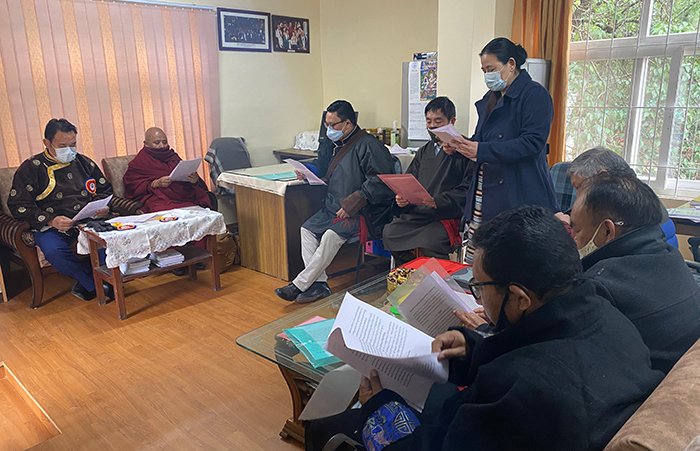 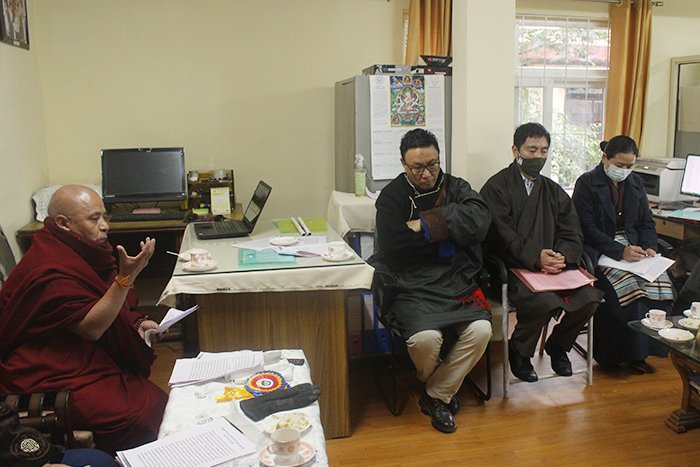