Free Nations vs Communist China: Prospects and Challenges for Tibet 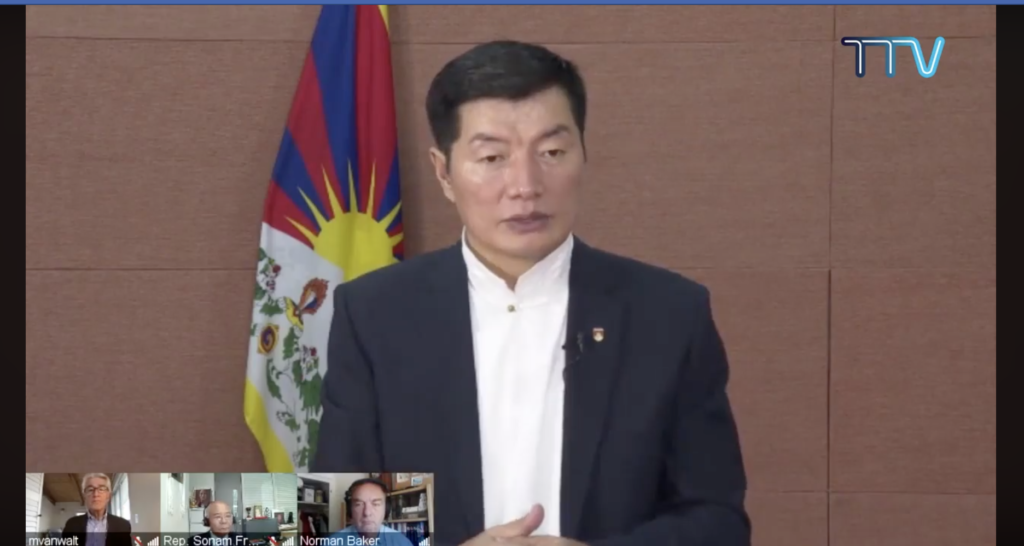 Dharamshala: After US Secretary of State Mike Pompeo’s speech at the Richard Nixon Library & Museum calling on free nations to change the Chinese Communist Party, emblematic of a major shift in US-China ties, has ignited a new discourse around the world on overcoming the totalitarian regime.

Representative Frasi welcomed the distinguished panellists invited to the discussion entitled, “USA calls Free Nations to change Chinese Communist Party: Analysis and Prospects for Tibet”, a topic he emphasized was “not only current and topical, but relevant to the future prospect and status of Tibet”.

Noting the rising anti-China sentiment around the world and the attitudinal shift, he opined that the future developments could possibly bode the end of the authoritarian government not unlike the historic fragmentation of the Soviet Union, despite China’s economic and military might.

Representative went on to observe that US policy has come full circle from Sino-America Rapprochement in 1970-71 under President Nixon and Kissinger, dealing a severe blow to the Tibetan movement, to the recent policy shift under President Trump and Secretary Pompeo with formal calls for democratic allies to change the Chinese Communist Party.

He shared that 130 countries at the WHO had pressed on investigating the origin of the coronavirus as it became common knowledge that Chinese government tried to hide information for almost 3-6 weeks. A critical period during which had the information been updated, 95 percent of the global crisis could have been prevented, as a major organisation alleges. The result of which is that now more than 9 trillion dollars loss of global economy and job loss has occurred, thereby making it difficult for politicians to assuage citizens’ disenchantment. Hence, the global leaders are under tremendous pressure because of which leaders are trying to make China accountable.

Referring to the international concerns about the security threat of Chinese technology, Sikyong noted the significant shift in diplomatic stance, such as the statement from Washington DC recognising China as competition no. 1 or rival no. 1 which is further bolstered by the EU designating China as economic competitor and rival last year. Subsequently, in January this year, the EU unveiled a recommended strategy for its member states to defend from Beijing dominating the 5g market. On security terms, Poland, Romania, Latvia have signed onto an agreement on 5g.

Also noteworthy, the UK government recently reversed the decision on 5g and banned Huawei in great Britain. UK government’s proposition for D10, an alliance of 10 democratic countries to create an alternate source for 5g technology, curbs dependence on Chinese technology.

Sikyong described these developments as a whole, an indication that China is under pressure to be responsible and an accountable member of the international community and conform to the rule of law.

China’s response has been on the contrary; cracking down in Hong Kong and diluting the basic law of Hong Kong, arresting so many under the new law, essentially compromising the one country-two systems.

As illustrated in China’s rise to becoming the 2nd largest donor of the UN after the US, and similarly, the World Bank’s lending to China at low-interest rates upto 2 billions of which Chinese government gives 200 million dollars to the UN in order to influence it, Dr Sangay said China is moving full throttle in undercutting the independent functions of international institutions, thus posing a looming threat upon the world which has depended on these institutes since the world war II.

For instances, UN Food and Agriculture Organization which was led by former Chinese vice-minister of Agriculture. And in 2018, Houlin Zhao, who had started his career at China’s Ministry for Post and Telecommunications, acquired 2nd four year term as the Secretary General of the International Telecommunication Union, a crucial body that sets the technical standard for communication network.

The appointment of Jiang Duan, an official at the Chinese Mission in Geneva, who was nominated and confirmed by the Asia regional grouping to a seat on the consultative group of UNHRC raised international concerns over the credibility of the UN body, making it apparent that the voices of Tibetans and Uyghur even at the UNHRC were going to be silenced. Duan holds the position until March 2021.

He noted that as things are optimistic from one side, similarly, it was bleak from another.

“On one hand, the democratic countries are coming together to make China accountable to liberal values, on the other hand, China is installing key people at UN bodies, WHO, WEF and hence the challenges remain.”

He, therefore, appealed the Tibetans to be more vocal and promote advocacy, hold protests out in the streets to revive Tibet advocacy in the international forum recalling the 90s when Tibet was a prominent issue.

Similarly, he urged friends of Tibet around the world to be more vocal, vigilant and actively optimize at this opportune time.

He concluded by noting that both good opportunities as well as major challenges exist where the cause of Tibet is concerned in this current climate.

Representative Frasi then followed up by posing a question to the Sikyong, “Is the call from the US a credible scenario that the world could see or have the possibility to change the CCP?”

Sikyong agreed that it appears so,referring to the belief formerly held by politicians like Kissinger that engagement and cooperation with China would ensure it would also conform to international norms, and which has proved wrong for the past 40 years. With Washington now, arriving at the consensus that China is a rival, from the security aspect, which is now shared across the departments of the administration. The US government is highlighting the plight of Uighurs and Hong Kongers to hold China accountable and the sentiment is common across the aisle. The EU, like-minded countries and democracies are generally, coming to realise that what Tibetans have been saying is true and are extending support, he concluded.