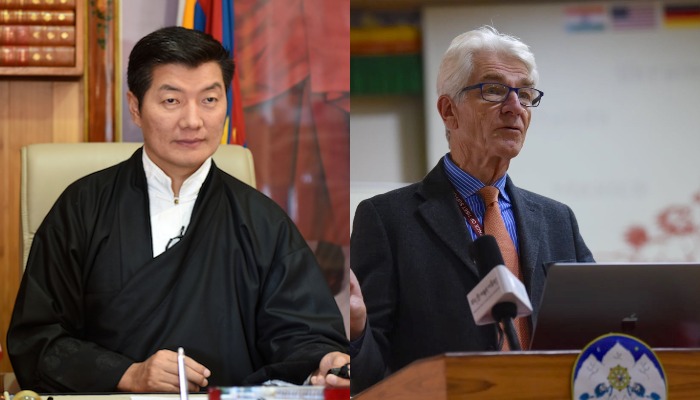 Dharamshala: In positive news for Tibetans and Tibet supporters around the world, Dr Michael C. van Walt van Praag, legal advisor, scholar and a long time supporter of Tibet and His Holiness the Dalai Lama has been awarded knighthood by the Dutch government, in recognition of “his life-long dedication and commendable achievements in support of the unrepresented and oppressed nations and peoples of the world; his tireless mediating activities to resolve intrastate conflicts through the non-profit organization Kreddha; as well as his academic pursuits.”

Michael was honoured with Royal distinction of Commander in the Order of Orange-Nassau (a Knighthood), one of the highest civilian distinctions given by the Dutch government for ‘exceptional service to society with a global impact’ and one rarely bestowed.

“I, on behalf of the Central Tibetan Administration, heartily congratulate Michael van Walt on his decoration of Commander in the Order of Orange-Nassau. The honour speaks volumes of Michael’s lifelong achievements in the promotion of sustainable peace and dialogue around the world,” said Dr Sangay. “I have known him for three decades. Michael’s been a truly great friend of Tibet and has had the longest association with the CTA and Tibetan people.”

“He has always attended all the major Tibet related events all over the world and his legal guidance has helped a lot in defining Tibet narrative at the international forum,” the President said, thanking him for his contribution to the Tibetan cause.

A review of his luminous resume reveals his extensive work from the various positions he has held throughout his thriving career- Council Member and Executive President of Kreddha: International Peace Council for States; Peoples and Minorities, Legal Advisor to the Office of His Holiness the Dalai Lama and to the Tibetan government in exile; Member of the Netherlands Development Assistance Research Council (RAWOO); Senior Legal Advisor, Ministry of Foreign Affairs and Cooperation, Second Transitional Government of East Timor, UNTAET; General Secretary of the Unrepresented Nations and Peoples Organisation (UNPO); Consultant for the United Nations Development Program (UNDP); Legal advisor to the All-Bougainville Leaders Peace Talks; Advisor to the Chechen Government delegation in negotiations between the Chechen Republic and the Russian Federation; Advisor to the Abkhazian Government delegation in peace talks between Georgia and Abkhazia; and many more.

His enduring relationship with Tibet dates back to the early 70s, from working on international Tibet support groups to assisting the Central Tibetan Administration in dialogues with China from 1984, he has contributed significantly to the global awareness of the Tibetan cause.

He has published books and written extensively on the peaceful resolution of the Tibet issue.