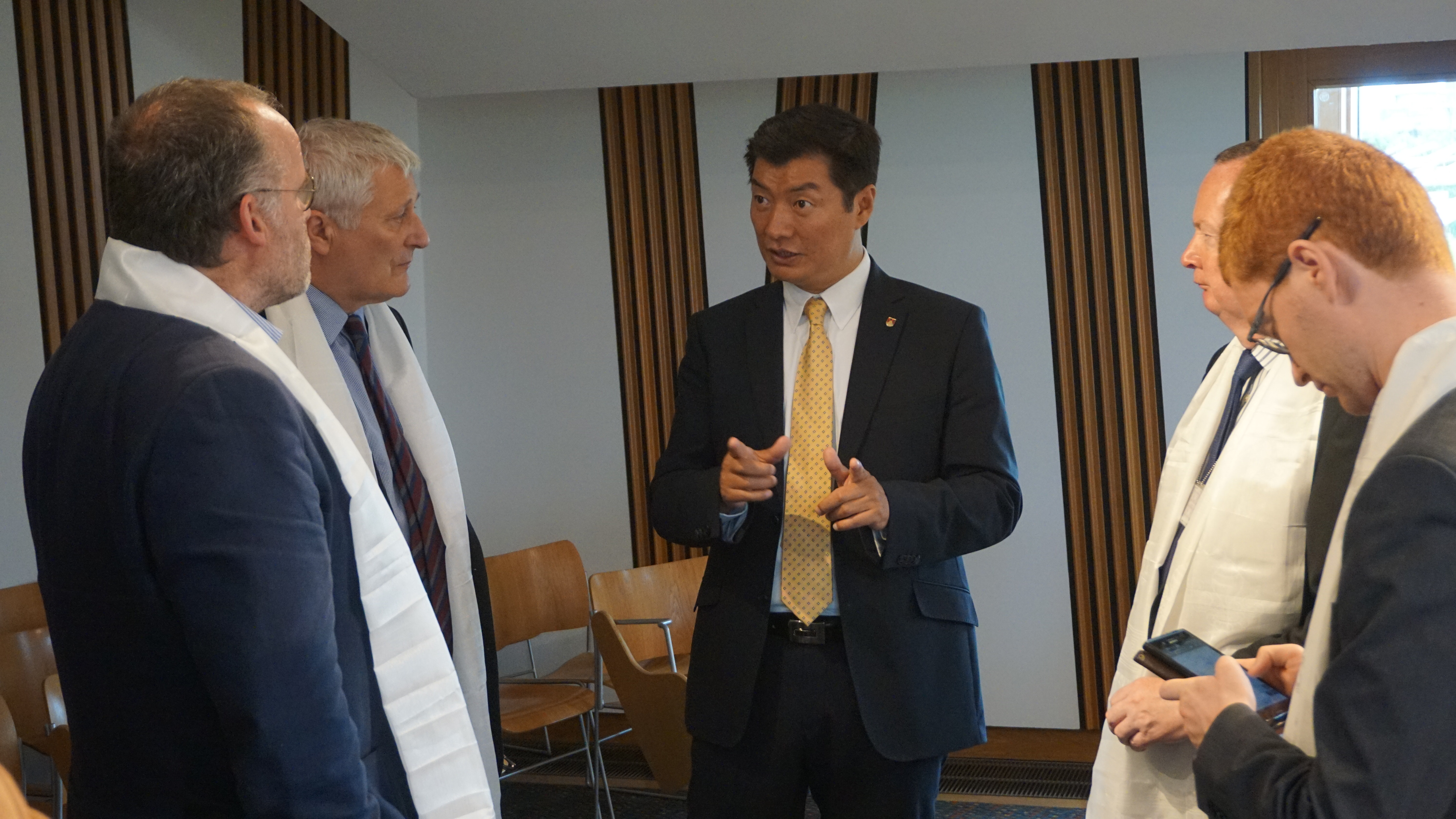 One on one interaction with Members of Scottish Parliament from Scottish National Party and Scottish Green Party, including three senior most members of Parliament.

The CPG had arranged for the President to meet with individual MSPs inside a room at the Scottish Parliament, after lunch. There the President met with ten Members of Scottish Parliament from two political parties: Scottish National Party & Scottish Green Party, including three senior most members of Parliament, who have been MSPs since the devolution of powers to the Scottish Parliament. In his one to one interactions with the MSPs, the President expressed his happiness at visiting Scotland for the first time and thanked them for their interest in meeting with him, and for their support. He personally extended invitations to them to visit Dharamshala, India. Stressing specifically on the importance of the Tibetan plateau in determining monsoon pattern and climate change in the rest of the world, he urged the MSPs to speak out for protection of Tibet’s fragile environment.

In his evening talk at the meeting of the Cross Party Group for Tibet, well attended by CPG members, the President began by thanking each and every one of the members for their support for Tibet. He stated that he had nothing to offer to them in return other than gratitude for their steadfast support through the years. Recalling His Holiness the Dalai Lama’s advice about “not forgetting old friends, while making new friends” he addressed them as “friends” and welcomed new members. Explaining with examples of CCP interference, particularly in Australia, he urged the United Kingdom to be careful about the impact of China’s rise and influence. With reference to Scotland, he noted, “support for Tibet here hasn’t waned, all thanks to you”.

Referring to CCP’s policy during the period 1950s-1960s when the Chinese authorities destroyed more than 98% of the monasteries in Tibet aimed at eliminating all traces of Tibetan religion, culture and identity, he remarked how with the blessings of His Holiness the Dalai Lama and through the concerted efforts of the Tibetans in exile, Buddhism was revived the world over, and this he highlighted as spiritual victory over China. He expressed optimism that gradually Tibetans would replicate this success on the political front as well. He based this optimism on the determination and strength of the Tibetans inside Tibet who, he said, continued to remain non-violent and peaceful against intensifying repression.

In a lengthy and interactive question & answer session covering topics as varied as UK government’s support for Tibet, Tibet’s environment, the dialogue process and the role that the CPG members can play in the Tibet movement, the President addressed them with in-depth clarification.

He referred to the UK’s support for Tibet as “improving”. He suggested that MSPs from the CPG could table a bill calling for resolution of the Tibet issue through dialogue based on the Middle Way Approach; and also a motion acknowledging the democratic system of Tibetan administration in exile. He welcomed a delegation visit from the CPG to Dharamshala, India.

The President also called on the MSPs to take note of China’s much-touted Belt and Road Initiative and to take lesson from Tibet’s example wherein a single road built by the CCP in the 1950s eventually led to Tibet’s complete occupation in 1959.

In conclusion, the President painted a picture of optimism and hope when he remarked that there was now a renewed interest, around the world, in what the Tibet example can teach about how to deal with China. He said that all is not lost and “not just that, we are gaining ground”.

The members appreciated the President’s presence in their midst at the Scottish Parliament and thanked him for his time and address. On behalf of the CPG, the members presented the President with Scottish gifts for remembrance and revisit.

Tomorrow the President returns to London, where he will speak on Geopolitics of China in Europe: Tibet a case study at the All Party Parliamentary Group for Tibet meeting at The Boothroyd Room, Portcullis House. He will also be doing media interviews.

President Dr Sangay speaking at the meeting of the Cross Party Group for Tibet at the Scottish parliament.

President Dr Sangay with members of the Cross Party Group for Tibet at the Scottish parliament. 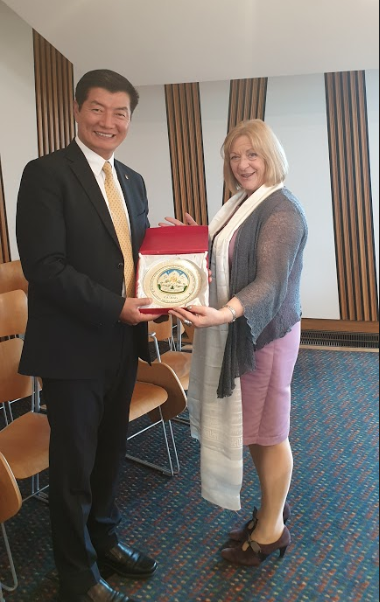 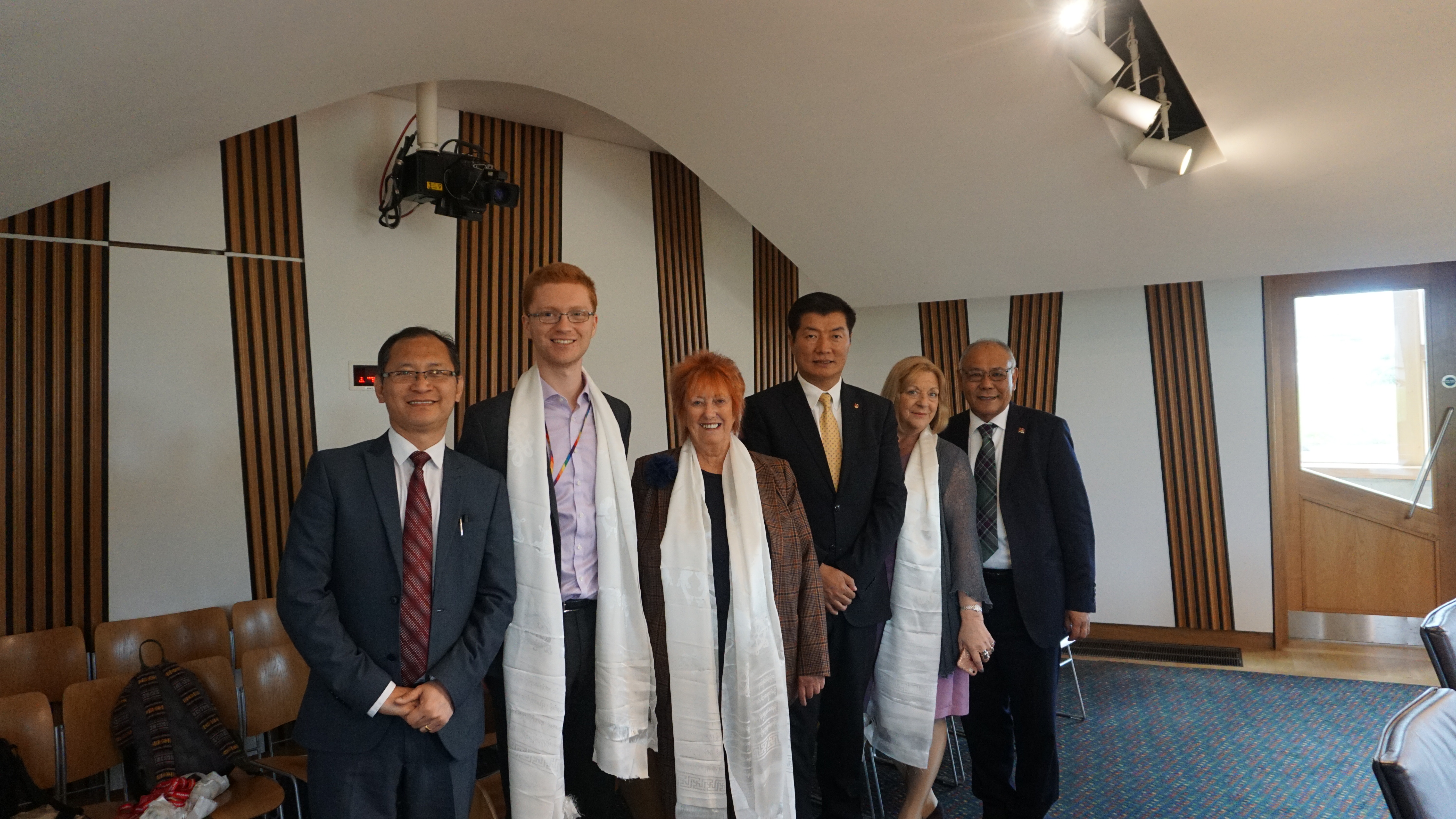 The President, Representative Sonam Frasi and Tenzin Kunga with Members of the Scottish Parliament.