Dharamshala: The deadly COVID-19 pandemic which has caused deaths of more than 2 lakhs and infected over 3 million globally since it emerged in China has also generated much fake news and disinformation from certain individuals and media organisations making it difficult for common people to seek clear guidance through all the barrage of fake news.

Recently, a wave of misleading, fake news has been circulating in the Tibetan community discrediting the CTA. Certain individuals and media organisations were found to be misusing the predicament of certain destitute Tibetans as props to falsely accuse CTA of not aiding the poor.

A video clip of the same context has been doing rounds, featuring 5 destitute Tibetan individuals, who by the official record are supported by the poverty alleviation program of CTA,  explaining their destituteness to a certain media org.

CTA has condemned the rumour through an explicit clarification on how each of the individuals appearing in the video were all supported under the CTA’s welfare initiative for the destitute.

The all-encompassing role and responsibility that CTA undertakes for the welfare of the destitute community is nothing short of a parent whose responsibility towards its children goes beyond the purviews of charity. It entails a much more integrated and systematic effort that is realized through good governance, policy implementations and monitoring and evaluation over a long period of time.

Since the 1990s when His Holiness the Dalai Lama first commissioned the Poverty alleviation committee for Tibetans in India, Nepal and Bhutan, the CTA has adopted an all-encompassing, multi-tiered approach to poverty alleviation to ensure sustainable, holistic development and empowerment of the destitute. More than a charity, the CTA as per the guidance of His Holiness the Dalai Lama, has sought to strengthen every aspect of societal development, generating equal opportunities in education, health, employment and social access, promoting social inclusion of the destitute, be it older persons, youth, family, persons with infirm health and disabilities so that the next generation can come out of the state of destitute and every Tibetan leads their lives in dignity.

The 14th and 15th Kashag has further bolstered CTA’s commitment towards the destitute Tibetans, through its renewed poverty alleviation policies and guiding principles of self-reliance, wherein it spends crores of rupees every year in providing quality education and building health and welfare support system for the destitute so that they can rise from poverty and lead a self-reliant, dignified life.

Last Saturday, in an exclusive interview with Tibet News Bureau, CTA issued official clarification on the matter and confirmed that the accusations were ‘totally baseless’ and further called it an opportunistic attempt by certain individuals and agents to concoct fake news.

The secretaries of CTA’s Home, Health, and Education Department respectively issued clarifications with a detailed explanation of the welfare services, healthcare benefits and coverage, education and employment programs that are generated each year to uplift them from their state of destitute.

Secretary Tsewang Dolma Shosur of the Home Department explained in detail the poverty alleviation initiative undertaken by the home department. 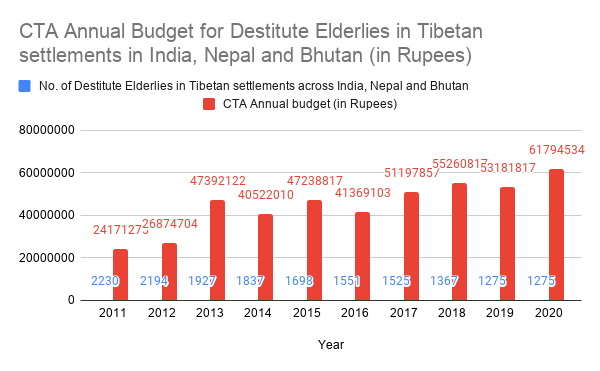 Department of Home’s annual spendings on destitute Tibetan elderlies in India, Nepal and Bhutan from 2011 to 2020.

Secretary Shosur asserted that the Dept. of Home’s priority concern is supporting the livelihood of those destitute elderlies above 65 years of age, many of whom have spent the prime of their lives resisting the invasion of their homeland and through the most excruciating struggles of exile have successfully forged a life in a foreign land without losing the hope to return to Tibet.

Through Adopt a granny and granddad program adoption program, the Home Department is able to provide the elderly poor and needy Tibetans with the means to live with dignity and respect.

Under this program, the department looks after the welfare of poor and needy Tibetan elders from all the Tibetan settlements in India, Nepal and Bhutan by providing monthly sponsorship money to meet their basic requirements. As far as possible, the department find sponsors for each elder who adopt them either as their granny or grand dad.

The ‘Adopt a Granny or Granddad’ sponsorship program has been very successful in helping thousands of elderly Tibetans to lead a decent life with dignity and respect at a stage when there is no source of income for them to carry on their livelihood due to lack of pension funds or social security.

Currently, there are 1367 destitute elderlies supported by the Adopt a granny and granddad program and Poverty Alleviation Scheme. Apart from that, the department is looking after the welfare of 14 old age home in India and Nepal that accommodates nearly 522 elderlies. Also, there are 106 ex-army stipend recipients who have retired prematurely with meagre benefits.

Two-fold increase in monthly stipend for destitute elderlies from 2011 to 2020.

“So far, with the blessing of His Holiness the Dalai Lama and the resilience of CTA, we didn’t face any financial constraints”, said Secretary Tsewang Dolma. She further provided the spendings on social welfare for old people. The annual overall expense of poverty alleviation stipend and old age home amounts to 130 million.

Education Secretary Karma Singey explained the department provisions for children from destitute households. The department’s main responsibility is overseeing the education of Tibetan students in exile. Reviewing the previous year’s budget, Secretary Karma noted that around 250 million are spent annually on educational expenses.

The majority of its budget is set aside for children’s education, related to financial aid programmes and for ‘destitute households with more than 3 children’ which amounts to 76 million in expenses. In addition, the Education Department supports all the expenses for the higher education of the children belonging to the destitute households.

Furthermore, the Secretary explained that currently there are 297 households designated as destitute under the Education Department out of which 81 students are under its direct supervision. 129 students are overseen by TCV, Dharamshala while the remaining 87 are cared for by Tibetan Homes Foundation, Mussoorie.

Besides providing their education fees, the Department also gives allowances to these students. 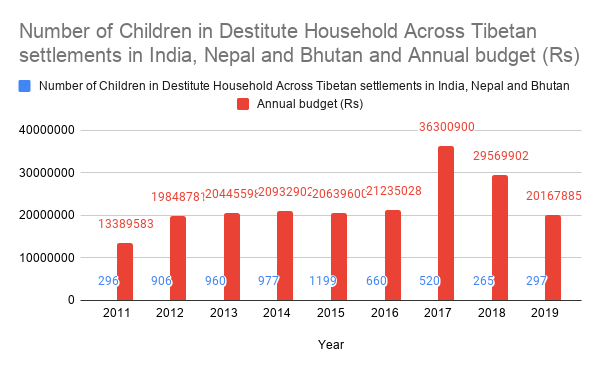 The Department of Education’s annual spendings on the education and allowances of destitute children from 2011 to 2019.

“Currently, there are 85 students from the ‘destitute’ category pursuing higher education. They have received scholarship aid during their school years, moreover, the eligibility criterion for scholarship aid has been reduced to 40% results in the 12th standard”, explained Secretary Singey.

Even something as basic as travel expenses incurred during the college application season is incurred by the Department. Helping these students does not stop there as, after their admission, they receive 4000 rupees in allowance during the first, second, and third years of college.

As for those children from the border regions of Tuting and Shabara, the department provides travel expenses and allowances as well.

Lastly, Secretary Palden Dhondup of the Department of Health issued a detailed clarification on the department’s primary focus which is to oversee the physical and mental wellbeing of the destitute people which he termed as category 13. He explained that around 763 destitute households are covered under the Health department’s various programs for the infirm destitute on whom the Department spends around 23 lakhs annually.

Apart from that, 70 lakh is spent on health initiatives and programs for HIV/AIDS, mental health disorders, newly arrived Tibetans from Tibet. As Hepatitis B has a high prevalence in the Tibetan community, the Department specifically set aside its budget to aid the destitute challenged by the disease. This year’s expenditure on the Hep B test and treatment was 90 lakh.

Similarly, Secretary Dhondup said around 4 lakhs was spent on conducting H.pylori tests. As people living with HIV/AIDS are among the most vulnerable groups and particularly in the Tibetan community, most of the HIV/AIDS patients are from the destitute category, the Health Department runs multiple entrepreneurship and employment programs to support HIV/AIDS patients to live with dignity. The Department also supports the livelihood families of HIV patients by granting full financial support to help them start micro-businesses such as stationaries, tailoring shops.

“These expenses rise each fiscal year and do not fall,” said Health Secretary. 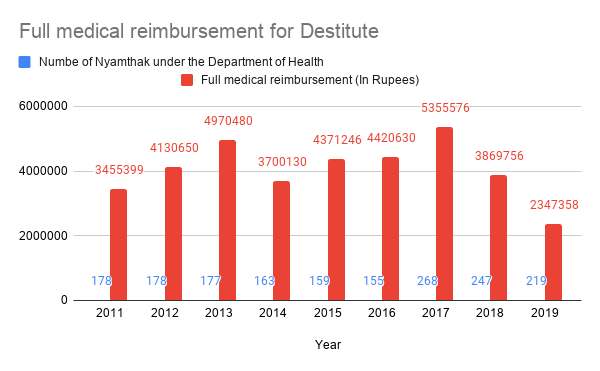 The Department of Health’s annual spendings on full medical reimbursement for the infirm destitute.

Unrelated to section or category 13, are former political prisoners. On special needs care programme, the Department of Health spends 18 lakhs annually. Similarly, for 4-5 patients of leprosy under the destitute category, a separate stipend for treatment is provided.  Toilet construction and water drawing facility for destitute families cost 119 lakhs in the fiscal year of 2019-2020.

Moreover, it is observed that mental health problems are more prevalent in destitute sections, especially among youth. For their treatment, the department spends 24 lakhs annually. Similarly, as TB-MDR cases are life-threatening and also expensive to treat, for every patient, medical bills come to lakhs which are all incurred by the Department. For patients from the destitute category, the Secretary stated that around 22 lakhs are spent in their medical reimbursements.

Under the Department’s ‘Mother and Infant’s healthcare programme’, the destitute child-bearing mothers and children receive provisions worth of 58-59 lakhs in expenses annually.

All things considered, Secretary Dhondup concluded that the Health Department spent a total of around 431 lakhs on destitute, including their those with infirm health, disabilities, mental health issues and HIV/AIDS patients.