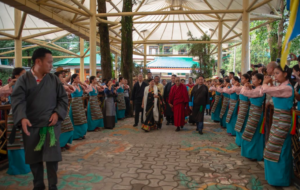 Dharamshala: The commemoration of the 59th anniversary of  ‘Tibetan Democracy Day’ was observed and celebrated at Tsuglagkhang, the main temple in Dharamshala today. Thousands of Tibetan exiles and foreigners assembled at Tsuglagkhang to take part in this momentous occasion.

Chief guest Smt. Sarveen Chaudhary, in her keynote address, stated Tibetans have built a strong and exemplary democracy under the vision and guidance of His Holiness the 14th Dalai Lama that will further continue to strengthen in the future. She said that the way Tibetans have preserved their cultural heritage and religion under the leadership of His Holiness is an example to the world, for which the Tibetan community deserves congratulations while she congratulated the Tibetans on the occasion of the 59th Anniversary of Tibetan Democracy Day. 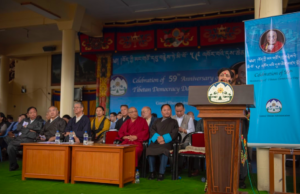 She also applauded the exiled Tibetans for their non-violent approach as their freedom struggle which has garnered strong international community’s support to their cause.

“The manner in which the Tibetans in exile have evolved their system of governance by following the ideals of democracy under the leadership of His Holiness the Dalai Lama is an example to the world,” Smt. Sarveen Chaudhary said.

Acting President, Ven. Karma Gelek Yuthok paid the heartfelt gratitude to both the Chief guest and special guest and further expressed his profound gratitude to the Government of India and the people of India for their unrelenting support to the Tibetan cause. 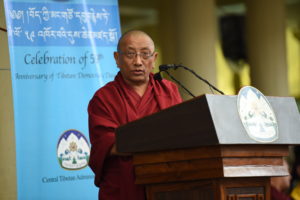 Kalon then briefly explained the evolution of the Tibetan democracy and the “immeasurable gift of His Holiness the Dalai Lama to the Tibetan people” who have successfully grasped the importance of such an institution, and drew attention to the unique nature of Tibetan Democracy and how it serves as a spokesperson for the Tibetan brothers and sisters struggling under China’s illegal occupation.

Meanwhile, he highlighted the recent high-level US Congressional delegation visit to the Central Tibetan Administration led by Congressman David Price and Vern Buchanan who expressed their admiration at the evolution of Tibetan democratic polity and assured their support for the Tibet cause. He also highlighted the rampant cultural and religious persecution in Tibet, including the demolition of Buddhist academics and forcible removal of monks and nuns which continues to this day forcing the world to call-out China on its discriminatory practices against Tibetans. 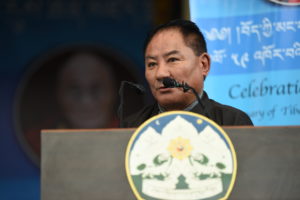 In the view of the upcoming event, he declared that Kashag and the Tibetan Parliament in exile will be convening the Third Special General Meeting of Tibetans from 3 to 5 October 2019.

He noted the expansive view of long term interest and concerns of the Tibetan People that His Holiness the Dalai Lama has, in his profound guidance that defies all possibilities for repaying the gratitude, enabled Tibetans today to have a democratic system under which the nature of Tibetan administration system is based on principles of freedom, truthfulness, and equality.

Meanwhile, he also spoke on the drafting of the Charter of Tibetans-in Exile and explained the process of holding elections and the importance of understanding the election rules and regulations among Tibetan people.

He further asserted that it is vitally important that the general Tibetan masses gain a proper understanding of these so that they are able to fully exercise their democratic rights under them. He urged Tibetan people to ensure that they do not neglect by heedlessness the sacred and valuable democratic system that has been gifted by His Holiness the Dalai Lama.

He also dwelled on the ongoing issue in Hong Kong and expressed the Tibetan Parliament in exile’s solidarity with the people of Hong Kong. He offered heartfelt gratitude to all those who supported and continue to support Tibetan cause on behalf of Tibetans living inside and outside Tibet.

Speaker Pema Jungney concluded his statement with prayers that His Holiness the Dalai Lama continues to live for a hundred aeons, with all his desires being accomplished without any obstacle and with spontaneity, with just cause of Tibet being resolved in all speediness.

Following the addresses, a cultural extravaganza showcasing traditional Tibetan dance and music was held by the Tibetan Institute of Performing Arts and the students of various Tibetan schools in Dharamshala which the audience thoroughly enjoyed. 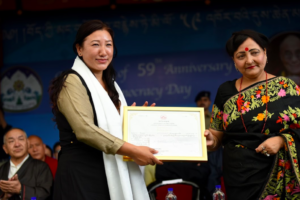 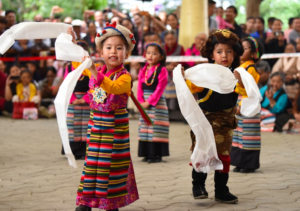 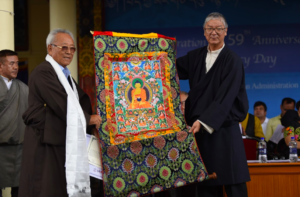 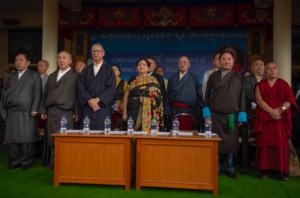 Heads of the three pillars of Tibetan administration in exile with Chief guest Smt Sarveen Chaudhary, Kalons and officials of CTA. Photo/Tenzin Jigme/CTA