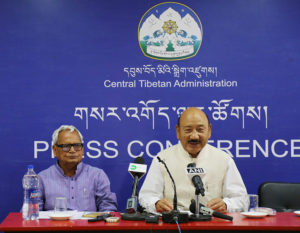 A press conference addressed by the Core Group for Tibetan Cause Convener Shri R.K Khirmey on the right and Co-Convener Shri Surender Kumar on the left at Lhakpa Tsering hall, Department of Information and International Relations. Photo/ Passang Dhondup/CTA

Dharamshala: A brief press conference on the 6th All India Tibet Support Groups Convention was held today at Lhakpa Tsering hall of the Department of Information and International Relations.

The press conference was held to highlight the key topics that will be analysed and discussed during the main event of 6th All India Tibet Support Groups Convention on 15 and 16 June 2019.

Shri R.K Khirmey, National Convener and Shri Surender Kumar National Co-Convener of Core Group for Tibetan Cause addressed the press conference in the presence of media personnel and Secretary Sonam Norbu Dagpo of Department of Information and International Relations.

Addressing the gathering, Shri R.K Khirmey presented a brief introduction about Core Group for Tibetan Cause and their fundamental objectives and functions as an apex body.

He informed that the Core Group for Tibetan Cause was formulated in 2002 as an apex coordinating body constituting of  NGOs and Tibet Support Groups across the country.

He further informed that the apex body was formed based on the realisation of former Kalon Tripa Samdhong Rinpoche who believed that a formal full-fledged organisation is needed to oversee and coordinate with the increasing number of NGOs and support groups working for Tibet cause.

Shri R.K Khirmey noted that Core Group for Tibetan Cause is organising the 6th All India Tibet Support Groups conference to commemorate the 60th years of His Holiness the Dalai Lama and fellow Tibetans in exile which he said coincides with 60th year of first All India Convention on Tibet  in Calcutta where Jai Prakash Narayan first addressed on Tibet issue  in 1959.

“But most importantly, we are organising the conference in view of the present critical scenario of Tibet while focusing on the strategies and action campaign on 5/50 vision of the CTA” noted Shri R.K Khirmey.

More than 180 participants from all over India is to take part in the conference where they will discuss and deliberate on various key issues such as the importance of Tibet to India, in keeping the view of Tibet’s vital existence between India and China and significance of Tibet’s Ecology and its impact on downstream nations particularly India. etc.

Shri Surender Kumar highlighted the issue of gross human right violations in Tibet resulting an increasing number of self-immolations and the vast environmental destructions caused by the Chinese government which is impacting the ecology of the neighboring countries especially India.

“Such issues need to be strictly confronted and addressed to by the world nations and we are here to draw the world attention on this” declared Shri Sunder Kumar, Co-Convener of Core Group for Tibetan Cause.

He also noted that the current policy of the Indian government is not helping the cause of Tibet enough. He was hopeful that the conference would generate productive action plans and resolutions.

The Convener and Co-convener both announced that the Core Group will also organise national convention this year to mark the year 1959 when Jaya Prakash Narayan first spoke on the issue of Tibet and asked Indians to support the people of Tibet and their cause.