Chinese ambassador’s statement on Tibet misleading and not true 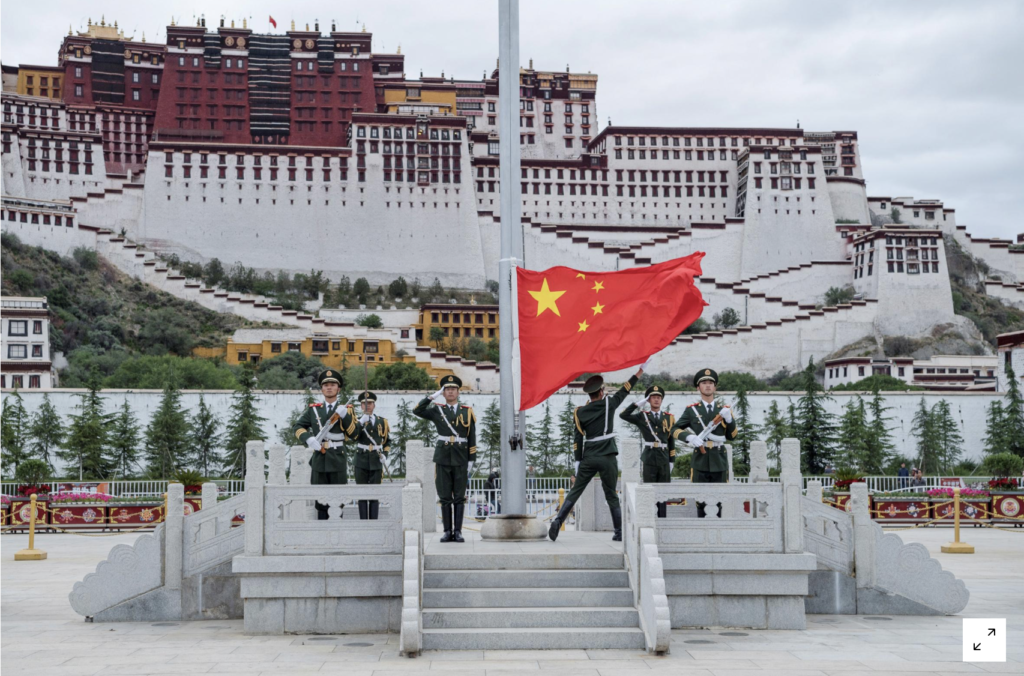 The Chinese national flag is raised during a ceremony marking the 96th anniversary of the founding of the Communist Party of China (CPC) at Potala Palace in Lhasa, Tibet Autonomous Region, China, July 1, 2017. CNS/He Penglei via REUTERS/File Photo

Chinese ambassador to India Sun Weidong’s article, “China’s Tibet: A story of progress” in Hindustan Times [Nov 6, 2019] is misleading and not true. It is only a reflection of what the Chinese communist leadership would like the world to believe. Xinhua News, the CCP’s mouthpiece, was quick to share the same for global consumption the next day. For the Tibetans, the sixty years of Chinese rule has not been a story of progress, development and religious freedom. On the contrary it has been a sixty long years of repression and occupation. The Ambassador has said, “Tibet has been part of China since ancient time. It enjoys development and progress”! I am surprised at the audacity of China making such statement in India, who knows the best what Tibetans have gone through all these years. Let me clarify and apprise the Ambassador and the Chinese leadership of the following facts:

The 7th century Tibetan Emperor Srongtsan Gampo won the hand of Chinese Tang Princess Wenchen Konjo because of his conquest and valour, and the princess was the fifth queen, not the main queen. Tibetan Buddhism has its source in India not China. Indian saint Padma Sambhava, who brought Buddhism in Tibet, is still revered as the second Buddha in Tibet. Many Indian masters have visited Tibet to teach and many Tibetan masters have travelled to India to receive the teachings. Tibetans Lamas have visited China to teach Buddhism, but there is no record of Chinese Buddhist masters visiting Tibet to teach. Ambassador’s assertion that Buddhism came to Tibet from China is wrong.

The Yuan dynasty was one of the Mongol dynasties or khanates to rule the eastern part of its territory, Kublai Khan [r. 1260-94 CE] founded it in 1271. Tibet enjoyed a special relationship of Priest-patron [Tib: Chos-yon] with the Mongol under Godan and Kublai Khan well before the establishment of the Yuan dynasty. China came under the Yuan dynasty when Kublai Khan invaded the southern Sung empire in 1279. China was only a part of the conquered territories and not the founder of the Dynasty. Therefore, it is preposterous on the part of China to claim Tibet because of the Mongol conquest. On that ground, Mongolia has a far better reason to claim Tibet and China.

China gained independence from the Mongols in 1368, eighteen years after Tibet and formed the Ming dynasty [1368-1644]. Historical records and maps drawn during the Yuan and the Ming show Tibet as a foreign state. The Yuan empire has twelve major provinces and Tibet was not included as one. This was because Tibet, although under Mongol influence, was ruled by Sakya Lamas since 1253 and not by the Mongols. Chinese territorial map drawn by Chinese legal officer Wang Fen in 1594 during the Ming Dynasty has also excluded Tibet. This goes on to say that Tibet was never considered a part of the Yuan and the Ming Empires.

In 1792, when Manchu emperor Qianglong [r.1736-1795] helped Tibet drive away the invading Gurkha force, his officials suggested 29-point regulations for effective administration. One of this was the use of golden urn to select the Dalai Lamas and other high Lamas. But except for the 11th Dalai Lama [1838-1856], Tibetans never adopted it because it lacked the religious sanctity. All the Dalai Lamas were selected as per age old Tibetan religious tradition, and the Chinese claim of authority on the reincarnation of the Dalai Lamas is a blatant lie and distortion of historical and religious facts.

In August 2007, China promulgated the so called ‘Order number 5’ to control and undermine the Tibetan religious activities. Under this decree all the incarnate Buddhist Lamas should seek approval of the state before being recognized as reincarnate Lamas. China communist party does not believe in religion, they consider religion as poison. So, it is unethical and ridiculous on the part of CCP to interfere in Tibetan religious matter. Tibetans have rejected this decree as gross violation of their religious freedom. The party members and Tibetans working in the government offices are not allowed to visit Monasteries and Temples, so are the children. Ironically, most of the monasteries are administered by the CCP members under heavy surveillance, and considering the ongoing destruction and repression in Larung-gar and Yachen-gar monasteries, what religious freedom the ambassador is talking about?

Now as far as the GDP growth in Tibet is concerned, the development has not benefitted the Tibetans. The growth figure is reflection of the massive militarization of the Tibetan plateau, investment in mining activities, construction of dams and tunnels, and increased employment and migration of Chinese workers and settlers in Tibet. It has marginalized the Tibetans and plunged Tibet into climate crisis, threatening the ecology of the neighboring south-east Asian countries.

We are all well aware of China’s provocation at the borders from time to time at its convenient time, but the concluding statement on India in the article, “It hopes and believes that India, as a major responsible country, will stick to its position, honor its commitments, resist interference on Tibet-related issues…” is no less a deliberate provocation. China should respect India’s sovereignty and patience. We all need to work together to create a healthy atmosphere to resolve Tibet issue and ensure stable development of Sino-Indian relations.

Disclaimer: The views expressed above are the author’s own.