China’s ostentatious seminars on Tibet, an attempt to save its face at UNHRC 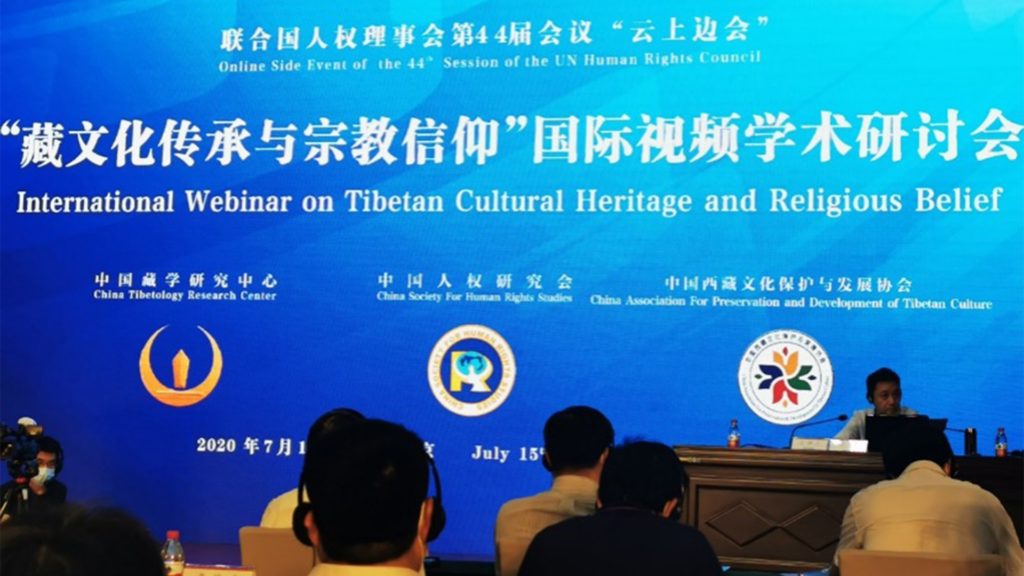 The CGTN, one of China’s official mouthpieces, has reported that China recently organized seminars on Tibet in Chongqing and Beijing on 14 and 15 July respectively. The themes of the seminar at Chongqing were: “Tibet’s Social Development and Human Rights Progress” and “Achievements and Prospects for Tibet’s Eradication of Poverty.”

These ostentatious seminars on Tibet are nothing more than an attempt to save its face at the ongoing 44th regular session of the United Nations Human Rights Council (UNHRC) in Geneva.

The Chongqing seminar was more of a discourse on how Tibet and Tibetans have achieved social development, human rights protection, and poverty eradication under the 60 years of communist rule. Chinese speakers Sun Hongnian of China Border Research Institute, and Zhang Yongle, executive dean of the Institute of Human Rights of Southwest University of Political Science and Law, have hailed the communist regime of the ‘remarkable achievement’ made in Tibet.

As usual, China has tried to justify its presence in Tibet with the development it has made and the money [Yuan] it has spent on Tibet, and the poverty alleviation in the region. It said, “From 1980 to 2018, financial assistance from the central budget totalled 1.24 trillion yuan, accounting to 91 percent of Tibet’s financial expenditure.”

But these financial assistance have only helped China in consolidating its power and grip on the region through militarization and sinicization of the Tibetan plateau. The funds are spent on maintaining the large military contingents, security personnel and the Chinese staff in the region. No wonder, India is constantly facing Chinese border aggressions. The money is also used to fund the exploitation of water and mineral resources of Tibet and its transportation to China.

As far as poverty alleviation is concerned, Tibet has never been a poor country. People had enough to eat and were far ahead to explore spiritual domains of the human mind. It was only after the Chinese occupation that Tibet faced famine, not once but twice, in 1961-1964 and again in 1968-1973, resulting in many deaths. Therefore, the poverty alleviation that China is talking about is only a facade to mislead the international community.

The report says, “Since the 1980s, the central government has invested more than 1.4 billion yuan in large-scale repairs of Tibetan cultural relics and key temples.”

Tibetans and the International community would appreciate it if the communist regime could be explicit with empirical data on how, when and where these funds have been disbursed and what key temples have become functional?

It brags about the existence of “1787 sites for the practices of Tibetan Buddhism, over 46,000 resident monks and nuns, and 358 Living Buddhas.”

But Tibet had at least 6259 proper monasteries, not sites, with about 592,558 monks and nuns before the Chinese invasion! China must first disclose where has all the rest gone?

“The seminar stressed that the freedom of religious belief is recognized and protected by relevant laws”.

What law is China talking about? For the Chinese Communist Party (CCP), religion is poison, and its members are not allowed to practice any forms of religion. However, the party has enacted laws to interfere in the religious affairs of the people. The laws, especially the 2007’s Order number-5, greatly violets the Tibetan people’s religious freedom. It is ridiculous and unacceptable that a communist regime should impose religious leaders and teachings on the masses.

The seminar in Beijing on 15 July was an online seminar on “Tibetan cultural heritage and religious belief”, and CGTN reports, “The discussions of scholars from all over the world fully demonstrated China’s major achievements in ethnic and religious policies, and opened a window for the world to understand China in a more comprehensive way.”

If China is really concerned about Tibetan cultural heritage and religious belief, it should restore Tibetan as primary language in the region, allow monastic education, and stop interfering in the selection of reincarnation of His Holiness the Dalai Lama and other high Lamas.

Both the seminars were part of the Chinese propaganda gimmicks to contest and to downplay the criticism it is facing right now at the ongoing 44th regular session of the United Nation Human Rights Council (UNHRC) in Geneva. Some 50 UN independent experts and from 30 UN Special Procedure Mandate Holders have called on the UNHRC on the gross violation of human rights and religious freedom in China and Hong Kong, and in the occupied regions like Tibet and East Turkistan.

In the seminars, China claimed cultural and religious freedom in Tibet. But just recently, it has issued an order to tear down all the prayer flags in Tibet. Huge monastic centers like Larung-gar and Yachen-gar have faced demolitions, monks and nuns driven away and displaced. The monastic complexes are now controlled by the Communist party members. Children are barred from joining and visiting monasteries. People are arrested and tortured for just having a photograph of His Holiness the Dalai Lama.

At this difficult time of coronavirus pandemic, instead of tending to the worsening domestic issues and cooperating with the international community in containing the pandemic, China has become more aggressive and hegemonic. China’s provocation at Southeast China seas and Indian borders has been condemned by the international community. Chinese atrocities and repression in Tibet and East Turkestan [Uighur] have increased.

The CGTN has reported the events as international seminars. But it was obvious that it was a closed one. At the Chongqing seminar, the only foreign representatives reported are Pakistan and Nepal, the two old and new all-weather friends in BRI debt traps.

It says “60 years of social development, and human rights in Tibet”. But for the Tibetans, it has been 60 years of brutal occupation and repression. Tibetans are deprived of genuine autonomy; there is no human rights and religious freedom. Not to speak of travelling abroad, Tibetans are not allowed to travel within Tibet itself. This is the reality.

We request the United Nation Human Rights Council (UNHRC) to act on the report submitted by the 50 UN independent rapporteurs and urge China to respect human rights and abide by the international norms and stop misleading the international community through fictitious seminars.

*Mr. Tsewang Gyalpo Arya is the Secretary of the Department of Information and International Relations (DIIR) of the Central Tibetan Administration (CTA). Disclaimer: The view expressed above is the author’s own.