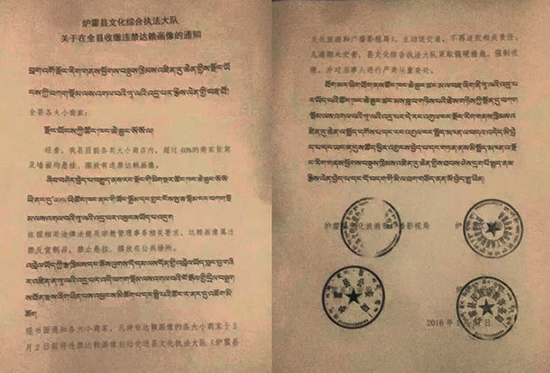 DHARAMSHALA: Chinese authorities in Dragko county (incorporated into China’s Sichuan province) have ordered Tibetan shopkeepers to handover all photos of Tibetan spiritual leader His Holiness the Dalai Lama by 2 February, according to confirmed sources.

The enforcement was ordered on 31 January by three departments of the local Dragko government namely the Office of Culture and Discipline, Office of Religious Affairs and the Public Security Bureau.

The enforcement also added that photos of His Holiness could no longer be sold or displayed in shops or stores serving the public.

The authorities have threatened severe punishment to those who fail to comply with the diktat.

“If any shop or store possessed photos of the Dalai Lama and displayed these before the date of this notice, these should be voluntarily surrendered to the Draggo County Office of Culture and Discipline by Feb. 2,” reads the order.

“Those who delay in handing these over, or who never turn them in, will be punished severely,” the notice reads.

The notice also added that Tibetans are welcome to display photos of China’s past and present leaders referring to the former heads of the Chinese Communist party.

The latest enforcement is widely perceived as a fresh attempt by Chinese authorities to suppress the Tibetan people inside Tibet’s faith and devotion to His Holiness the Dalai Lama, who is deeply revered by Tibetans.