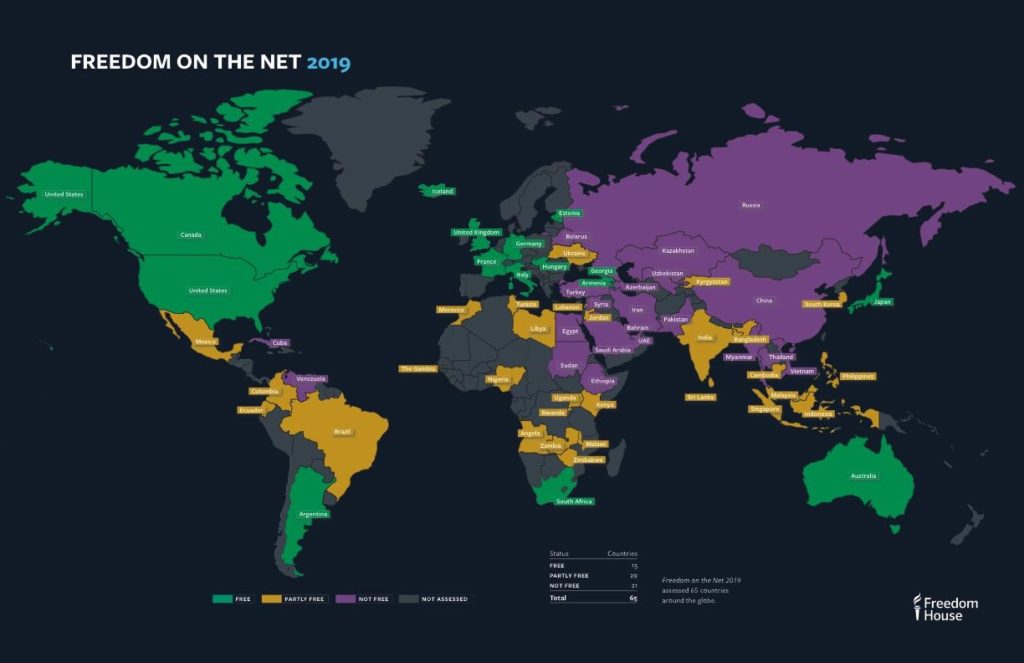 Freedom on the net continued to decline in 2019.

The report assessed internet freedom in 65 countries from June 2018 to May 2019 and assigned each country with a score between zero to hundred where zero indicates least free and 100 indicates most free. The score received by each country was given on grounds of obstacles to access, limits on content, and violations of user rights.

China, with 854 million internet users as of June 2019, scored 10 out of 100 followed by Iran with 15 and Syria with 17 score. The study shows that 33 of 65 assessed countries in Freedom on the Net experienced deterioration in internet freedom and declines have outnumbered gains for the ninth consecutive year.

According to the report, “Censorship reached unprecedented extremes in China as the government enhanced its information controls ahead of the 30th anniversary of the Tiananmen Square massacre and in the face of persistent antigovernment protests in Hong Kong”. The report also cited examples of government shutting down individual accounts on WeChat, social media platform for “deviant” behavior like “commenting on environmental disasters” which encouraged pervasive self-censorship. Officials have reported removing tens of thousands of accounts for allegedly “harmful” content on a quarterly basis. The campaign cut individuals off from a multifaceted tool that has become essential to everyday life in China, used for purposes ranging from transportation to banking.

The report also emphasized that this blunt penalty has also narrowed path for digital mobilization and further silenced online activism.

The report assessed internet freedom in 65 countries which account for 87 percent of the internet user worldwide.