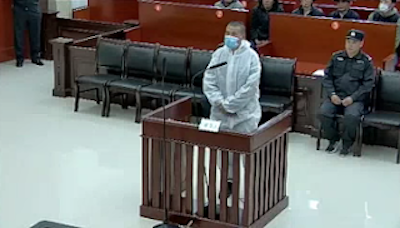 51-year-old Tashi Gyal who faces one-year imprisonment for sharing Tibet-related information on WeChat is seen standing in a court. Photo/wqw2010.blogpost.com

Dharamshala: A Tibetan nomad has been sentenced to one year in prison on charges of “inciting separatism” and “endangering national security” by the Golog Prefecture Intermediate Court in Tibet’s traditional Amdo province.

According to a report by a Chinese website Rights Defender, Tashi Gyal was arrested on 30 May 2020 for sharing information related to Tibet including His Holiness the Dalai Lama and Dr. Lobsang Sangay, Sikyong of Central Tibetan Administration on WeChat in 2015.

As a result, on 16 May 2020, the local authorities detained and interrogated Tashi Gyal for 15 days, reported Rights Defenders. The Chinese authorities called his actions illegal and aimed at “splitting the nation” and “endangering the national security.”

On 12 June, he was officially arrested and held in custody. On 13 October 2020, the Golog Prefecture Intermediate Court sentenced Tashi Gyal to one year in prison until 30 May 2021.

The trial was held behind closed doors, and apparently without the knowledge of his family members or friends, a common practice by the Chinese authorities against Tibetans charged for political acts. Hence, the news of the 51-year-old Tashi Gyal’s sentence got out 10 months after his arrest. At the end of the trial, the Chinese authorities also confiscated his mobile phone.