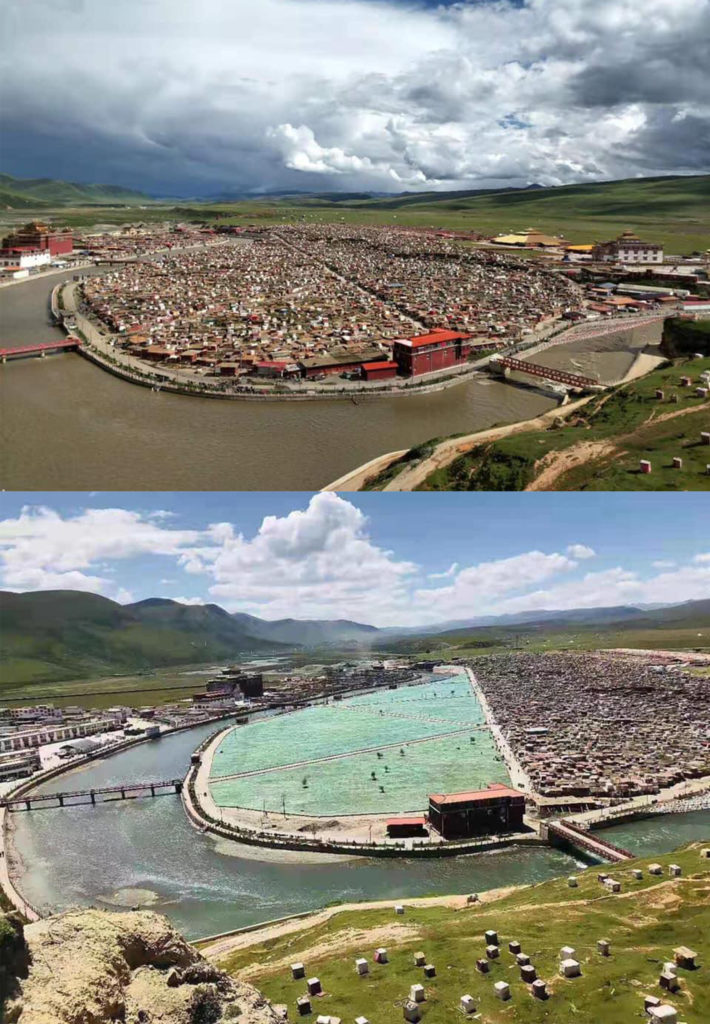 Dharamshala: Nearly half of Yachen Gar Buddhist complex situated in Tibet’s Karze region which is now incorporated into China’s Sichuan province has been demolished by Chinese authorities. In the recent pictures received from Tibet, one can see that half of the Tibetan Buddhists nuns’ dwellings have been demolished and in an effort to cover-up the demolition the Chinese authorities have covered the ground with green plastic.

In May this year around 3,500 monks, nuns and Buddhist practitioners were forcefully evicted from the Yachen Gar Buddhist complex. The number crossed over 7,000 later and within months following their forceful evictions, their dwellings have been razed to the ground.

Many disturbing reports of torture and forceful confinement of the evicted residents including the beatings of the evicted nuns who are currently confined in Jomda (Ch: Jiangda) County of Chamdo Prefecture (Ch: Changdu) are emanating from Tibet. These nuns are being subjected to the so-called patriotic re-education camp and are not even allowed to wear their Buddhist robes.

The demolitions are part of the ongoing religious persecution of Tibetans. The Chinese government has been systematically repressing the rights of Tibetans to practice and partake in religious rites and rituals. Even Tibetan school children are forbidden from participating in any religious activities during their vacations. Tibetan children are barred from joining monasteries and receiving religious education until the age of 18. At the age of 6, the 11th Panchen Lama Gedhun Choekyi Nyima was abducted by Chinese authorities and even after 29 years of his enforced disappearance China refuses to divulge any information about him.

Commenting on the deplorable situation inside Tibet, Tsewang Gyalpo Arya, the Information Secretary of Department of Information and International Relations remarked, “The situation in Tibet has gone from bad to worst. Tibet is now virtually closed to the outside world. Through its large military presence and the draconian rule, China has Tibet under its iron grip in full control physically. Now, they are trying to erase the Tibetan identity and spiritualism by putting restrictions on the Tibetan language and religion. Destruction of monasteries and removal of monks and nuns from Larung Gar and Yachen Gar is a blatant violation of religious and cultural rights of the people. Almost half of the monastic complex of Yachen Gar is destroyed, this is a great loss not only to the Tibetans but also to the Chinese practitioners and to the world heritage. We sincerely urge the Chinese leadership to respect our religious and cultural values.”