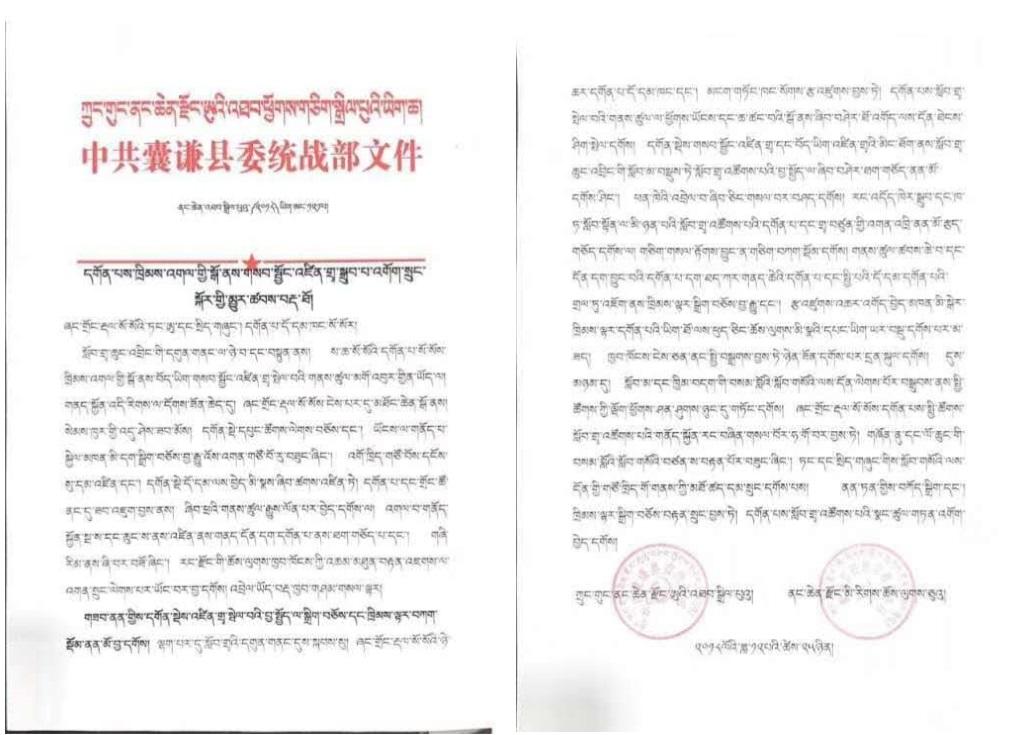 During the two-month school break, the local Tibetan monasteries in Nangchen county conduct free, informal Tibetan classes that have grown popularity among Tibetan students studying in Chinese schools in the past few years. But this winter, Chinese authorities issued an “urgent notice” banning the local monasteries from teaching the “illegal classes” even before they could convene, confirmed our source.

In previous years, according to our source, around 1000 to 1500 Tibetan students in Nangchen county used to take these free classes run by volunteer monks from nearby monasteries and retired teachers to learn Tibetan language, poetry, etc. “These informal classes are not related to political issues at all! They are purely education for the students,” remarked the source.

Besides Nangchen, almost all other counties of the so-called Yushu Tibetan Autonomous Prefecture are also imposed with similar ban on the informal Tibetan classes. The policy dictated by the “higher-ups” not only violates the rights of the Tibetan people but also indicates China’s annihilation of Tibetan language and culture. The crackdown on these informal Tibetan classes during the winter break and Tibetan language in Yushu aggravated from around 2015 onwards when more restrictions curbed the learning of Tibetan language. On January 27, 2016, Tashi Wangchuk was detained in Kyegudo for advocating for the rights of the Tibetan people to learn their language. Two years later, on May 22, the Yushul Intermediate People’s Court sentenced Tashi Wangchuk to five years. As for the informal Tibetan classes, that has seen a total ban this year.

The informal schools and their students

Most of the students taking the free Tibetan classes conducted by monks and other volunteer teachers are young teenagers, some belonging to the nearby nomadic villages. Attendees also include students who were “sent to faraway Chinese places after the devastating 2010 Yushul earthquake such as Guangxi” with distance of almost 3000kms away.

“Having spent a few years in China, these Tibetan children return home during their winter school break with their Tibetan language palpably weakened,” explained the source. The students then come to these classes to learn Tibetan poetry and grammar from the learned monks and other teachers. “These classes became a success as the students enjoy the classes. Sometimes they have tea parties. But now it is impossible for even 10-20 people to have a gathering,” added our source.

Last year, notice from school forbidding Tibetan children from taking part in religious activities were also reported in “Tibet Autonomous Region”. Yet, it is significant to note that this is the first known incident where the UFWD has issued such order.

On January 18 this year, the heads of the United Front Work Department (UFWD) gathered for a meeting in Beijing. The state mouthpiece Xinhua reported that the officials were called for “enhanced efforts” and “to create a strong sense of community for the Chinese nation.” The UFWD is tasked to monitor political dissents, cultivate loyalty and suppress “separatism” with specific bureaus allocated each for Tibet, Xinjiang and Hong Kong, Macau and Taiwan, as well as another for “Ethnic and Religious Work”.