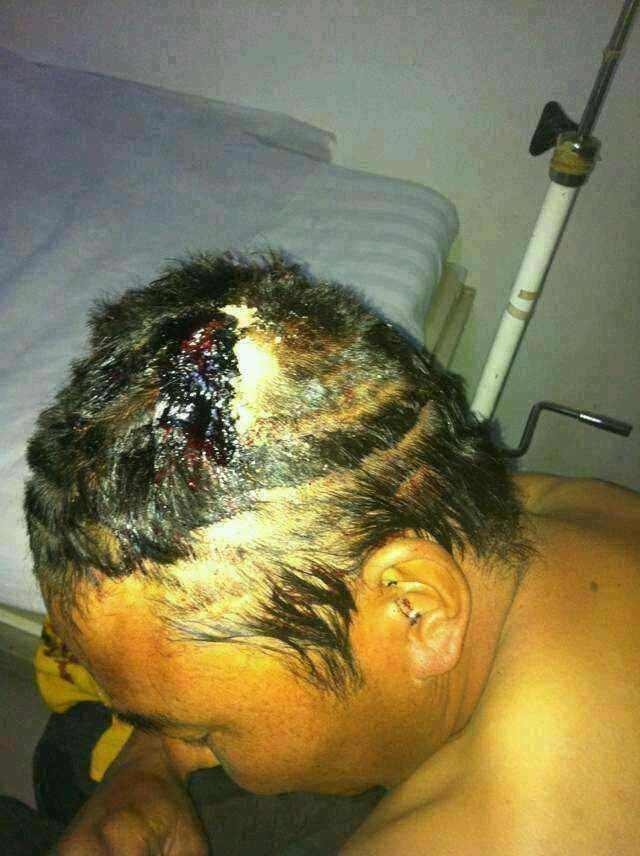 Aga Tashi with a bullet injury on his head. Photo courtesy/ Free Tibet.org

Initial news reports on the incident have suggested that six innocent Tibetans were shot and injured. (See Earlier Report) But at least two leading Tibetan Rights groups, Free Tibet, based in London and the Tibetan Centre for Human Rights and Democracy (TCHRD) now confirm that more than 14 Tibetans have been shot and injured during the firing on unarmed Tibetans in Tawu on 6 July. As reported earlier, the incident occurred after an altercation ensued when Chinese police tried to intervene at a local Tibetan gathering to pray and celebrate the 78th birthday of His Holiness the Dalai Lama.

Dozens were also arrested and tortured after the firing on unarmed Tibetans by Chinese police. At least twenty people were arrested, including some of those injured in the shooting, Free Tibet has stated in a press release yesterday.

The Tibetans  detained were severely beaten and tortured and were subjected to shocks from  electric prods, Free Tibet said.  72-year-old Yama Tsering had sustained an arm injury during the incident and Lobsang Choedon, a nun, was severely beaten and was hospitalised for serious head injuries sustained as a result.

Over 3000 Tibetans gathered at the Tawu Nyatso monastery later that day on 6 July to express solidarity with the injured and protest the actions of the Chinese police. They called for the immediate release of all those Tibetans detained earlier in the day. The protesters have threatened to withdraw their children from government schools and boycott all farming activities if their demands are not met. Local truck drivers have also joined the protest threatening strikes.

The Chinese authorities later released the detained Tibetans at around midnight on 7 July after their detention at around 4 pm on 6 July.