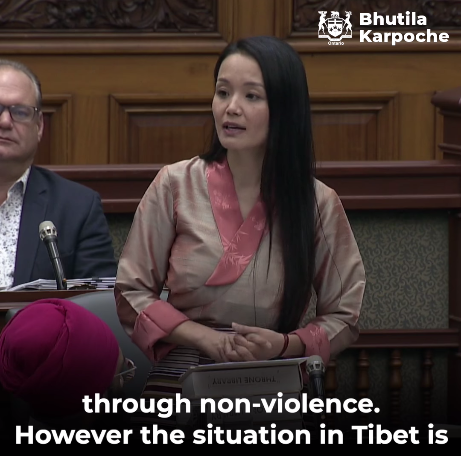 Toronto: Tibetan-Canadian MPP Bhutila Karpoche, who made history in 2018 by becoming the first Tibetan origin to be elected to public office in North America, raised the subject of worsening human rights conditions in Tibet in the Legislative Assembly of Ontario on 10 December, the 30th anniversary of the Nobel peace prize award on His Holiness the Dalai Lama and International Human Rights day.

10 December is day of historic importance for Tibetans as the Tibetan spiritual leader His Holiness the Dalai Lama was recognised with the Nobel prize for his efforts for the peaceful resolution of the Tibet issue on this day in 1989.

MMP Bhutila Karpoche in her speech said, “I rise in the House today as proud Tibetan-Canadian to commemorate the 30th anniversary of the conferment of Nobel peace prize on His Holiness the 14th Dalai Lama. This honour was bestowed on His Holiness on December 10th, International Human Rights Day or ‘the struggle for the liberation of Tibet and efforts for a peaceful resolution instead of using violence.”

However she said the situation in Tibet is worsening and there are ongoing human rights abuses by the Chinese government.

“The arbitrary imprisonment of environmental activist Anya Sengdra and Tenzin Wangchuk for advocating for Tibetans’ right to learn their own language and the more than 150 self-immolations that have occurred since 2009 in protest of Chinese illegal occupation of Tibet and their repressive policies.”

The MMP said China’s human rights violations were not only limited to Tibet, but also in “East Turkistan and Hong Kong- the recent leaked documents which confirmed the mass detention of Uyghurs in camps for indoctrination and forced labour; and the ongoing movement for democracy in Hong Kong which had reached its seventh month despite the Chinese government’s attempts to shut it down through mass arrests and violence.”

Quoting the Dalai Lama’s Nobel Peace Prize speech wherein he talked about the right and freedom of individual and peoples to determine one’s own destiny, she urged the Canadians to support the Tibetans, Uyghurs and Hong Kongers in their pursuit for freedom and human rights.

“We who enjoy and have the freedom have a responsibility to support the fight for the freedom of others,” she concluded.