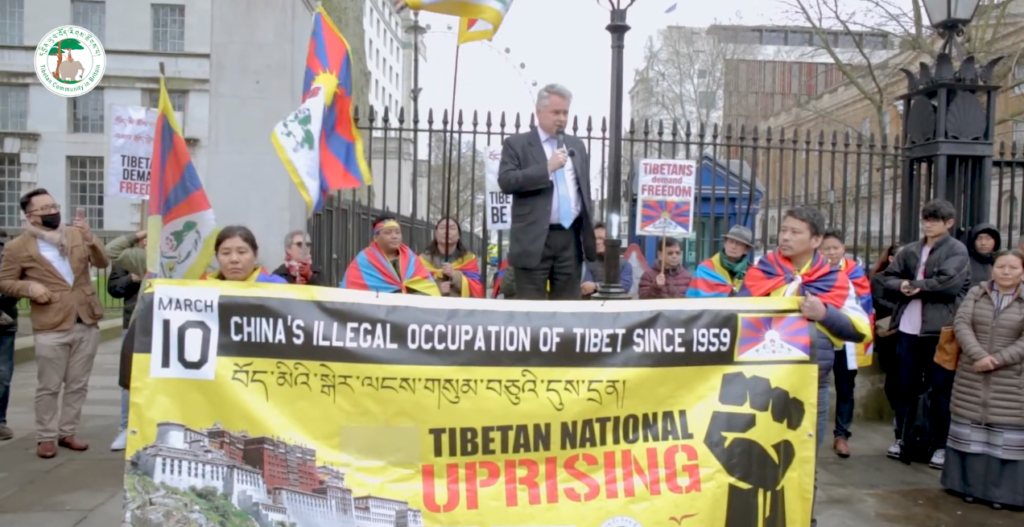 Rt Hon Tim Loughton, Member of Parliament and co-chair of All Party Parliamentary Group for Tibet speaking on the occasion of the 61st Anniversary of ‘Tibetan Uprising Day’.

Dharamshala: Rt Hon Tim Loughton, Member of Parliament and co-chair of All Party Parliamentary Group for Tibet delivered this statement in observance of the 61st anniversary of Tibetan Uprising Day, which commemorates resistance to occupation by Chinese government forces in Tibet and the subsequent exile of His Holiness the Dalai Lama:

“Friends, it is so good to see so many of you here in Whitehall today. You bring some great colour and great voice to a very grey day otherwise. And as Penpa said, “You are just a small representation of the many Tibetans in Tibet, throughout the world and the supporters and friends of Tibet like me and many other millions of people around the world who support your cause. And as Penpa said, I have been a longstanding friend of Tibet in Parliament in my 23 years. But it was also the very first demonstration that I had ever went on as a student when we marched to the Chinese embassy with the Tibet Society, back in the 1970s and I have been doing it ever since.

“So what you are doing today is so necessary to keep up the pressure on this important issue. It is with sadness that we commemorate 61 years since the uprising against that oppression and occupation by the Chinese which goes on unabated to this day. We remember those more than a million peaceful, peace-loving Tibetans who have lost their lives at the hands of Chinese oppression over all those years. Now we are joined by the oppression of the Uyghurs, by the clampdown in Hong Kong, by the Chinese attitude towards the Taiwanese as further examples of just what a cruel and oppressive regime the Chinese can be. All the Tibetan people want, the most peace-loving people in the world, is to be able to live their lives in peace and security, to look after your families and to practice your faiths and beliefs in ways that your relatives and ancestors have done for centuries beforehand. That isn’t asking much, that’s what all of us in the west and in this country take for granted.

“If this demonstration were happening in Lhasa it wouldn’t be lasting very long. We know because the Chinese do not like criticism. At least in this country, we can come together, we can plead the case of Tibetans who are effectively in incarceration in Tibet within China and just ask for basic human rights that we all take for granted, to be respected there. And the only way you deal with the Chinese is to stand up to them, that’s the way you stand to bullies, that’s the only way you deal with bullies.”

He added, “The Tibet Reciprocal Act that I launched last year, based on the US congress for access to Tibet, is needed for diplomats and media access to Tibet to expose and publicise the bullying and oppression that is ongoing in that part of the world. It will be back in the next few weeks to ensure that the cause of Tibet is back on the radar. The cause of Tibet is not just about Tibetans but for the principle of democracy that is dear to everybody.” He concluded by urging the demonstrators to carry on the protests in front of the Chinese embassy and assured them that he was committed to the cause of Tibet and believed in the resolution of the conflict through dialogue with the Chinese representatives.