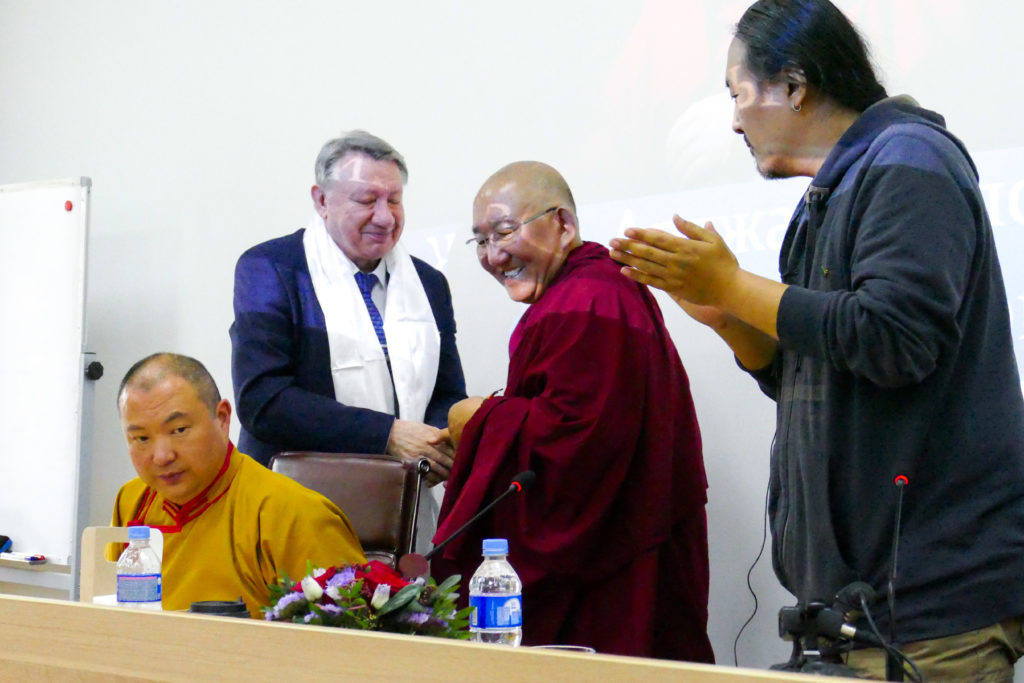 Prof Velery Androsov and Arjia Rinpoche exchanging greetings during the Book release of “Surviving the Dragon” in the Russian Language.

Russia: Autobiography of Arjia Rinpoche, “Surviving the Dragon” was released in Russian and the book release presentation was held at the Institute of Oriental Studies of the Russian Academy of Science in Moscow, Russian Federation. Journalist, scholars, and supporters attended the book release and book signing.
The director of the Institute Prof. Valery Androsov opened the book release by thanking those who were involved in the translation in particularly Prof. Irina Garri from the Republic of Buryatia. She has done intensive work and written many articles on Religion and Culture of Tibet, Mongolia, and Buryatia.

Honorary Representative Telo Tulku Rinpoche dedicated this book release to Panchen Lama 30th birthday that is being commemorated this month. “In Arjia Rinpoche biography, there are many details not only about Arjia Rinpoche personal life, but many details of the 10th Panchen Lama’s deeds as the second highest spiritual leader of Tibet who remained behind in Tibet after 1959. Arjia Rinpoche was one of those who eyewitnesses many of the accounts of the 10th Panchen Lama as well as the Chinese selection process of the Chinese installed 11th Panchen Lama. There are many details in the book that give us critical information of the 10th Panchen lama passing and the selection of the reincarnation of the 11th Panchen Lama that was never known to the public ” Telo Tulku Rinpoche said “ I recommend all to read this book that gives many true facts of the late Panchen Lama and how the Chinese Government manipulated the selection of the new reincarnation”
Arjia Rinpoche was born in 1050, in the same year as Moa Zedong’s People’s Liberation Army invaded Tibet. His early years were ones of geographical and political isolation. His nomadic family herded their yaks across the high plains of the Tibetan-Mongolian border, their camp never far from the vast blue waters of Lake Kokonor. At the age of two, he was recognized by the Tenth Panchen Lama (the second-ranking figure in Tibet after the Dalai Lama) as the reincarnation of the father of Tsongkhapa (the founder of the Gelug sect of Tibetan Buddhism). At the age of seven, he was sent to live in Kumbum Monastery, one of Tibet’s six great monastic universities.

In the following years, the Arjia Rinpoche’s life became a series of extreme swings of fortune: first as a carefree child, then as a protected and revered incarnate lama, then as a youth singled out and ridiculed by the Communists, then as a forced laborer in a Chinese camp, then as a “rehabilitated counterinsurgent” released from hard labor at the age of thirty, and, finally, as a favorite of the Beijing hierarchy, he was named head abbot of Kumbum Monastery, a position that proved to be more political than religious; it paved the way for even higher positions, including vice-chairman of the Chinese Youth Association, vice president of the Central Government’s Buddhist Association, and member of Beijing’s Central Government.

Arjia Rinpoche also remained closely aligned with the Tenth Panchen Lama throughout this time. He acted as his assistant for many years and was with him the day before he died in 1989—an event still shrouded in rumors of foul play. After the Panchen Lama’s passing, Arjia was named a member of the Communists’ nominating committee, created to select a new Panchen Lama, a task traditionally left to the standing Dalai Lama. He witnessed firsthand as the Communists choreographed the “lottery” for the Eleventh Panchen Lama. (The little boy who had been the Dalai Lama’s choice was apprehended by the Chinese; tragically, the boy’s whereabouts are still unknown.) After the rigged selection, Arjia Rinpoche was named tutor of the new Panchen Lama. Demoralized and realizing that he could no longer support the grim charade of a false Panchen Lama, Arjia Rinpoche fled China. Against tremendous odds, he successfully eluded the Chinese and in 1998 reached American soil, where he was granted political asylum by the United States Government. His escape remains a major source of embarrassment for China’s Central Government.

In 2005, the H.H. the Dalai Lama appointed Arjia Rinpoche the director of the Tibetan Cultural Center (TCC), in Bloomington, Indiana USA. His Holiness’s eldest brother, Professor Thubten Jigme Norbu, established the strictly non-political, nonprofit TCC in 1979 to support Tibetans both in Tibet and in exile and to preserve Tibetan (and Mongolian) Buddhist culture.

Prof. Irina Garri commenting on her translation into Russian. 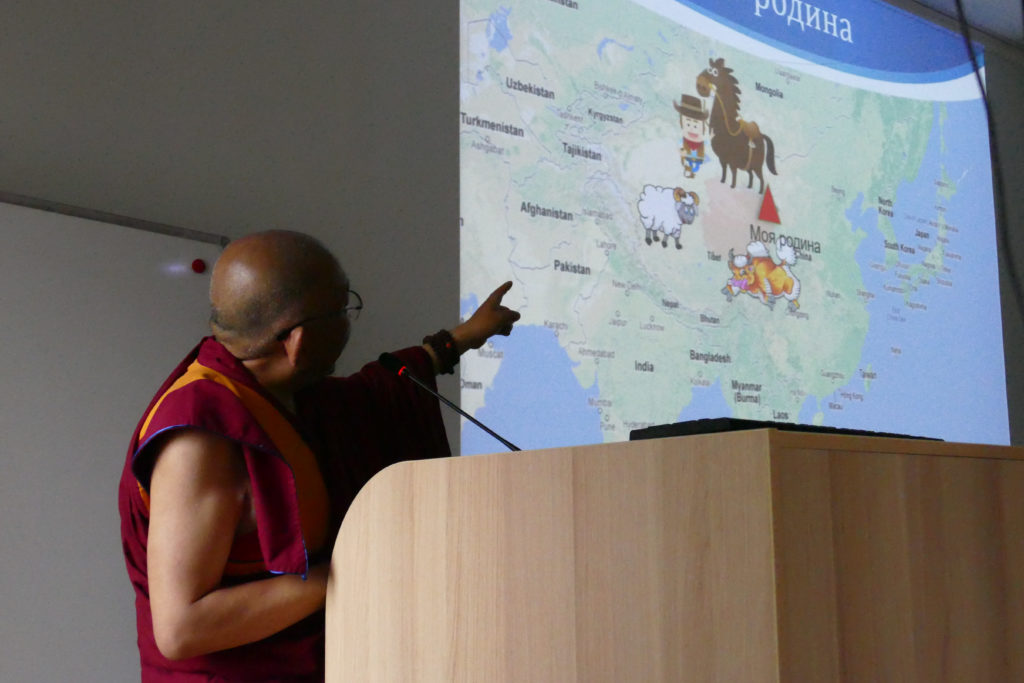 Arjia pointing to map of Tibet showing the area he was born in Eastern Tibet.