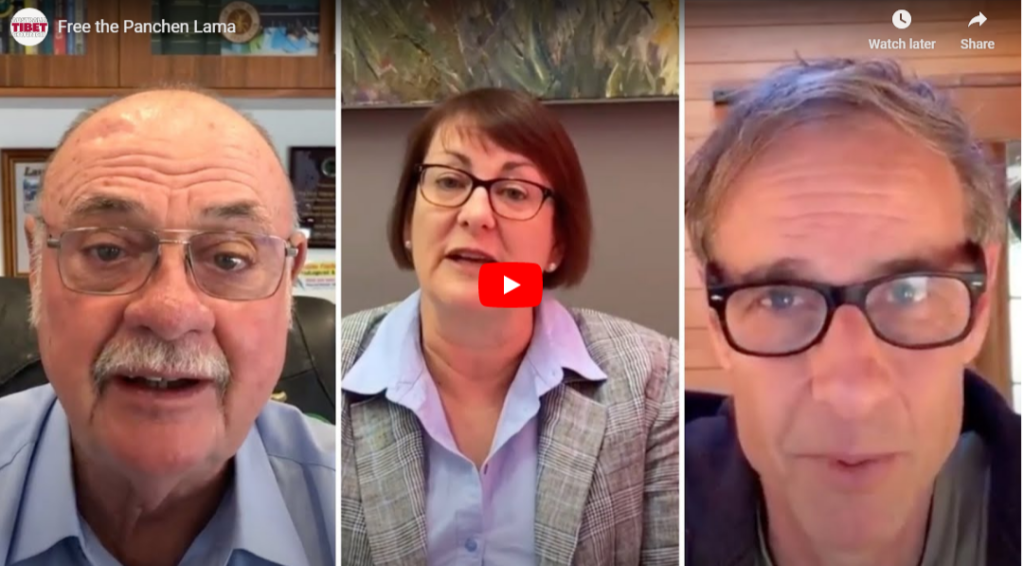 The members of the Australian Parliamentary support group for Tibet, (left to right) Warren Entsch, Susan Templeman, and Nick McKim express their support to pressing on China to release the 11th Panchen Lama. Photo/ Screengrab

Australia: As Tibetan people around the world observed the sad event of May 17, the day when their precious and revered Panchen Lama was abducted by the Chinese government, never to be seen or heard again but the global call for the release of the Panchen Lama garnered a groundswell of support of government officials, parliamentarians, prominent international rights organizations even in crisis times due to coronavirus.

In this global call for the release of Panchen Lama, the Australian Parliamentary Group for Tibet sends a strong video message to the Chinese government holding them accountable for the gross violation of human rights in Tibet and the rights of Panchen Lama.

MP Warren Entsch, Co-chair of All-Party Parliamentary Group for Tibet (APPGT) shared that his experience of having met Tibetan political prisoners in the past has revealed a lot about the suffering faced by Tibetan people.

He noted that the story of Panchen Lama starkly represents the violation of religious freedom in Tibet in addition to illicit interference in the religious tradition of the Tibetan people.

“On the 25th anniversary of his disappearance, I call on the Chinese government to let the Panchen Lama of Tibet free”, he said.

MP Susan Templeman, Labour co-chair of Parliamentary Tibet Friendship Group stated that her party believes in the rights of all people to live in peace and freedom wherever they are including the ethnic-religious minorities in China such as the Tibetans. She added, “the world knows about the Dalai Lama but not so much about the 31-year-old Panchen Lama and that’s because he is held captive in prison by China for the last 25 years.”

She stressed that 25 years of imprisonment is unjustifiable for any person, especially when that is “through no fault of his own”. She voiced her support to the Australia Tibet Council’s campaign to help free the Panchen Lama.

Senator Nick McKim, co-deputy leader of the Australian Greens and member of the Australian Parliamentary Group for Tibet, highlighted the oppressive conditions of political prisoners in comparison to the distress experienced by the coronavirus-inflicted world, the latter for whom there is the hope of coming out of the situation. In contrast,  political prisoners “have no hope” forever getting freedom again especially with the case of Panchen Lama who has been under lockdown by the Chinese government for 25 years. This is a great injustice and a great tragedy not just for the Panchen Lama but for all the Tibetan people.

He added, “the story of the Panchen Lama exposes the brutal reality of the Chinese government’s occupation and invasion of Tibet,” and cited the Freedom House Index report which identified Tibet as the second least free country in the world only after Syria, for five consecutive years.