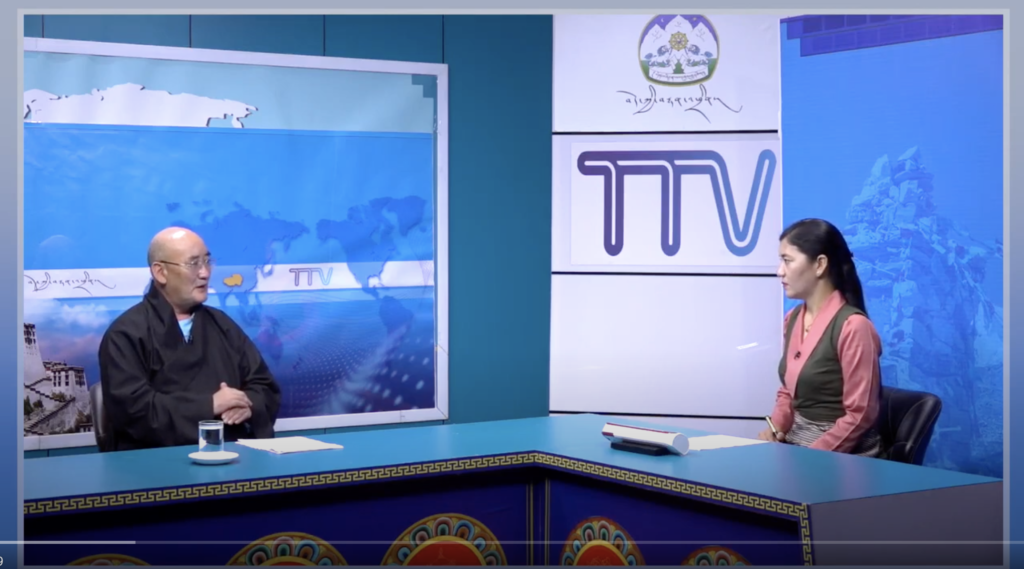 Dharamshala: Tibet TV of Department of Information and International Relations interviewed Kalon Phagpa Tsering Labrang, Department of Security on the occasion of the completion of the 4th and the penultimate year of the 15th Kashag

Following is the English translation of the interview with the Kalon, originally conducted in Tibetan. Watch here.

Tibet TV: Tashi Delek, Kungo. As you mark the completion of the fourth year tenure as Kalon of Department of Security under the 15th Kashag, can you share with us the key achievements of the Department these past four years.

Since its establishment in 1959, the Security department as one of seven departments within Central Tibetan Administration has been ably led by many Kalons before me. It is due to their leadership that till date there has been no dereliction in the performance and discharge of our duties towards the security and wellbeing of His Holiness. As an incumbent Kalon, I sincerely thank and acknowledge their contribution. In that regard, the Government of India also has provided us continued support since many decades.

The Department is charged with the responsibility to plan, coordinate and implement all security arrangements before the expected visit of His Holiness for any event taking place across India and to ensure his safety throughout. This entails maintaining close coordination with the concerned local authorities at all times. Thirdly, the Kalon and Secretary supervises the security details and arrangement in all of His Holiness’ engagements across India. Particularly, as a Kalon, I have made sure to oversee all of His Holiness’ travels to Tibetan areas across India.

Both the Kalon and Secretary also associate closely with the Office of His Holiness the Dalai Lama for routine security reviews. More recently, the Security department has also extended services such as procuring face masks, hand gloves, digital thermometer and other protective gears for the security guards at the phodrang. In collaboration with the relevant office of the GOI, we have provided training to the security staff of the department and the phodrang.

Hence it may be assured that in these four years since I have taken my oath of office under the 15th Kashag, the Department of Security has fully committed to its responsibilities and have ensured absolutely no lapses in providing the utmost security coverage to the person of His Holiness. For these remaining months, I pledge full commitment to the entrusted duties.

As I said, there has been no untoward incidents with regard to the safety and security of His Holiness till date but that doesn’t absolve us from our collective responsibility to maintain vigilance against any potential threats. In my assessment, the most serious threat comes from our adversary; secondly, from entities inciting terrorism; thirdly, from a number of dholgyal propitiators. At the same time, we are also monitoring for signs of threats from outside these demarcation. We have been increasingly concerned by the actions of a few individuals within the community that have been indicative of some level of threat to the wellbeing of His Holiness. As of now, they are under our vigilance, but we also advise the public to be alert at all times.

Tibet TV: The priority task of the Security department as explained is ensuring the security of His Holiness the Dalai Lama. What are the specific measures that the department undertakes for the wellbeing of Tibetan community in India?

Through branch security office, the department also assist newly arrived Tibetans to register for RC services. Due to the kindness of Indian government and the concerted efforts of our department, the Bureau of His Holiness the Dalai Lama in Delhi and Sikyong’s leadership, we are successfully working towards securing RC for 955 unregistered Tibetans. There are also a several others who have applied and we are extending all possible help.

For years, the Reception Centres administered by the department have looked after the new refugees coming from Tibet. We have also set up a new Reception Centre in Sonali. Due to the vision and guidance of Kashag, together with the support of the Department of Health and Home, we have been able to help the newly arrived in reconstructing their lives. In these 4 years, we have facilitated the rehabilitation of more than 700 Tibetans from India to abroad for better quality of life. We still continue to support former political prisoners who are still in India through the rehabilitation program.

The Department, in collaboration with the Delhi Bureau has brought in certain relaxation in the process for registration and renewal of RC and IC. Previously, IC registration would take a year but through our consistent appeals with the relevant authorities, the process is now expedited from one year to 3 months. Secondly, Tibetans who are registered online are granted RC for upto 5 years. All this has been possible due to the kindness of the GOI, the Kashag and dedicated efforts of the staff at the security department and the Delhi Bureau.

Tibet TV: What is the status of the Tibetan Reception Centers?

Kalon: Receiving the new arrivals from Tibet has been an important undertaking of the department. The Department of Security has previously administered 3 Reception Centres to look after the new refugees arriving from Tibet: Nepal, Delhi and Dharamshala and most recently Sonali. The reception centre in Dharamshala is now registered as Administrative Training and Welfare Society. The overall welfare of the new arrived, including their education, health, medical insurances, housing and RC related services are fully supported by the department and the CTA to help them reconstruct their lives. The Reception Centre also helps them to join schools, monasteries or find jobs as per their wishes. In the four years, we have supported over 200 new arrived Tibetans through various programs. During the 2017 Kalachakra teaching in Both Gaya, His Holiness had appreciated the good work that the reception centers have been doing in providing for the new arrived Tibetans. Especially during the Kalachakra teaching, in addition to covering their stay, transport and basics, the centers had also arranged pilgrimages and audience with His Holiness.

Tibet TV: Were there any challenges for the activities of the Department these past years? If so, how did you overcome them?

Kalon: There were no direct challenges per se. I am thankful to the highly efficient staff of our department who work very hard in order to leave no room for lapses. I’d also like to mention the security staff of phodrang whose sense of responsibility and commitment to the work are also extremely praiseworthy. Speaking of the most pertinent challenge to our society, there are certain fringe elements or more precisely, Chinese agents who engage in active infiltration into Tibetan community with the aim to disintegrate Tibetan unity and community as a whole. In 2018, a Chinese national was convicted by the Swedish government for spying on Tibetan refugees in Sweden to pass on their information to Chinese intelligence officers. Now recently there was another arrest of a Chinese agent from Delhi. As the security department, we have previously monitored and are very much aware of this particular situation. With being said, I once again remind the Tibetan public to be ever more vigilant of such elements and take necessary measures such as reporting any untoward activities to the department, branch office or the welfare office. Doing so can help prevent potential threat to the community and the Tibetan movement in the long run.

Tibet TV: You are now embarking on the final year of your tenure as Security Kalon, how do you envision for the department to become even more efficient? What message do you have for the  Tibetan people with respect to promoting peace, unity in the society and most importantly, ensuring the wellbeing and security of His Holiness.

Kalon: In the remaining months, we will continue to prioritize the security and wellbeing of His Holiness while also discharging other important duties and services to the newly arrived, former political prisoners and the diaspora community.

As I have already told, the general public needs to be ever more alert especially more so in the following months as we approach the 2021 general elections. This period is going to be critical as to whether or not we are able to tackle these disruptive elements who at the behest of the Chinese government propagate fake news, seek to incite communal and sectarian rife through falsified social media accounts, and hundreds other insidious tactics. Their only motive is to sow disunity in the Tibetan community and to disintegrate it through every means possible. In tackling, every member of the Tibetan community must shoulder responsibility including the candidates who are running for the elections and their supporters. I urge upon them to conduct their campaigns in a dignified manner and in strict adherence to the election guidelines. Especially when engaging in debates on social media, exercise restraint and caution.

It should also be noted that our department will be monitoring all developments throughout the election process and if required, we will take necessary actions against whosoever may be found to deliberately stoke disharmony by inciting sentiments of regionalism and sectarianism.

Lastly, to all the Tibetans worldwide, remain vigilant and united against those who seek to disintegrate Tibetan unity and be especially alert on social media. Take the necessary measures in order to identify and counter fringe elements.

Tibet TV: Thank you, Kungo. Congratulations on the successful four-year term and best wishes on the final.