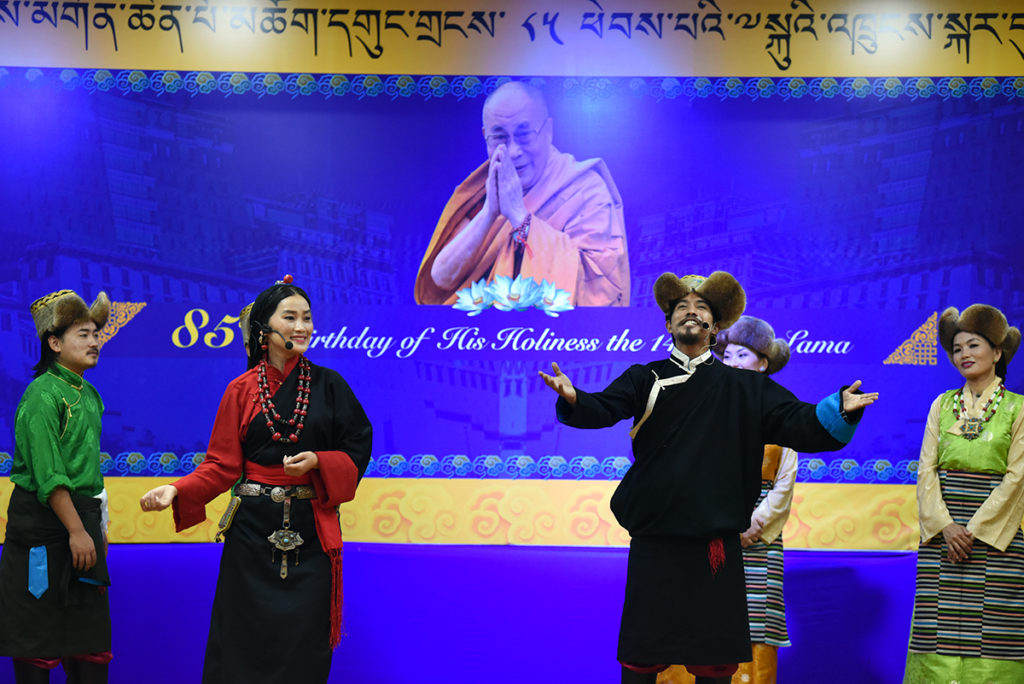 Dharamshala: The coronavirus pandemic may have altered the look of events around the world, but in no way has it affected the sentiments and the spirit of Tibetans and millions of Buddhists around the world as they celebrate the auspicious birthday of their most revered leader. For them, the Dalai Lama is their very heart and soul and also the guiding light and source of inspiration in these times of great uncertainty.

This year’s official celebration organised by the CTA turned into an unprecedented showcase of solidarity and celebration of the life of His Holiness with more than 140 political leaders, spiritual figures, nobel laureates and other eminent personalities from all over the world coming together to celebrate His Holiness’ birthday through the CTA organised ceremony that was broadcasted live.

Although the physical gathering at the CTA headquarters was strictly restricted in accordance with the state and central guidelines, thousands of virtual audiences from around the world joined the celebration through the live broadcast.

Speaking on the occasion, Sikyong Dr Lobsang Sangay, the honourable President of the Central Tibetan Administration expressed his deep gratitude to His Holiness for leading Tibet through one of its darkest periods and nurturing the Tibetan exile community into the most successful refugee community with a robust democratic system.

He further expressed that for the six million Tibetans His Holiness is the “glorious sun…the peerless teacher who has been guiding Tibetans through every hardship, both personal and national.”

His Holiness’ legacy of making this world a more peaceful, more compassionate through a universe of initiatives “continues to steer the world towards a more peaceful co-existence,” Sikyong added.

In his tribute to His Holiness, Sikyong shared that the image of the Tibetan community as the most successful refugee community in the eyes of many around the world was the culmination of His Holiness’ uniting efforts and supreme sacrifices. “Like a parent” he added that His Holiness has nurtured the Tibetans and “saved Tibet from becoming a mere footnote in the story of lost and forgotten nations.”

In appreciation of such an outstanding contribution to Tibetan people and his tireless efforts in spreading the message of peace and compassion, Sikyong announced that the whole year starting July 1, 2020, to 30 June 2021 will be dedicated as “Year of Gratitude” to His Holiness the Dalai Lama. 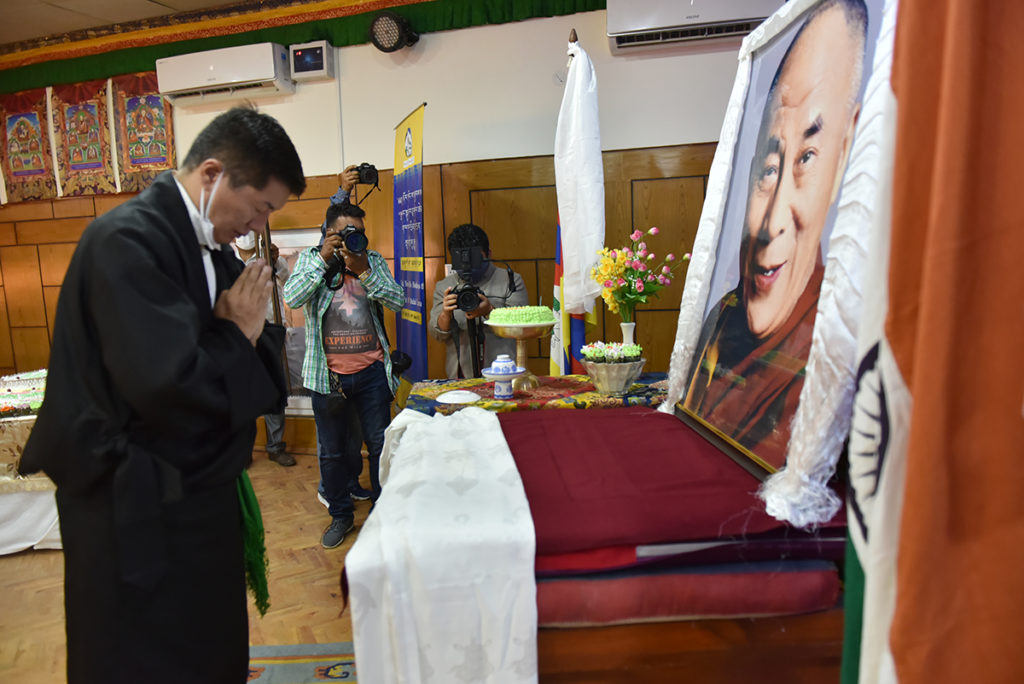 Sikyong Dr Lobsang Sangay offers obeisance before a portrait of His Holiness the Dalai Lama at the official celebration.

He further urged Tibetans and friends around the world to “initiate and take part in activities in their capacities to create awareness about the life and four commitments of His Holiness.”

In his final remarks, Sikyong offered prayers and solidarity to all the nations and individuals affected by COVID-19 and extolled the teachings of His Holiness as a source of solace, hope, and blessing for thousands in these uncertain times.

Honourable Speaker of Tibetan Parliament-in-Exile said the essence of marking the birthday of His Holiness the Dalai Lama is to remember Him as the destined deity of Tibet and his deeds, and to heed and respectfully study and follow advice and guidance of His Holiness.

“The magnitude of the debt of gratitude that all of us Tibetans owe to His Holiness for his boundless deeds in fields both religious and political is such that it could never ever be repaid,” he said, further adding that the best gift to His Holiness on his birthday would be remember and contribute to His Holiness’ four lifelong commitments.

“This will undoubtedly be the most meaningful way to present a gift to His Holiness the Dalai Lama on His birthday.”

“On this day of perfect bliss, we, on behalf of all Tibetans in Tibet and in exile, offer greetings with unshakable devotion of body, speech, and mind to His Holiness the Dalai Lama repeated a countless times and, along with it, offer fervent prayers that His Holiness may live for a hundred aeons so as to provide us with great kindness the nectar-like teachings of clairvoyant guidance which is akin to the continuity of a summer stream at all times.”

The official function also featured the launch of a composition of 113 popular quotes fo His Holiness the Dalai Lama, an initiative of the Department of Information and International Relations as part of the CTAs’ yearlong gratitude campaign.

The ceremony concluded on an auspicious note with the gathering of dignitaries reciting the mantra of Avalokiteshvara, Om Mani Padme Hung, a thousand times. Earlier this morning, in a special message to Tibetans, His Holiness had advised that reciting the mantra of Avalokiteshvara would be beneficial as Tibetans share a unique connection with Avalokiteshvara. His Holiness also affirmed that the positive virtue accumulated through such practice could also contribute to him living over 110 years.

Though the official ceremony ends here, public celebrations of His Holiness’ birthday continues across the world and most importantly, the CTA led “Year of Gratitude” campaign—to celebrate and promote the lifelong commitments of His Holiness the Dalai Lama—will continue yearlong in every corner of the world, in a collective effort to offer His Holiness the greatest of all Dalai Lamas, the truly best gift on his 85th birthday. 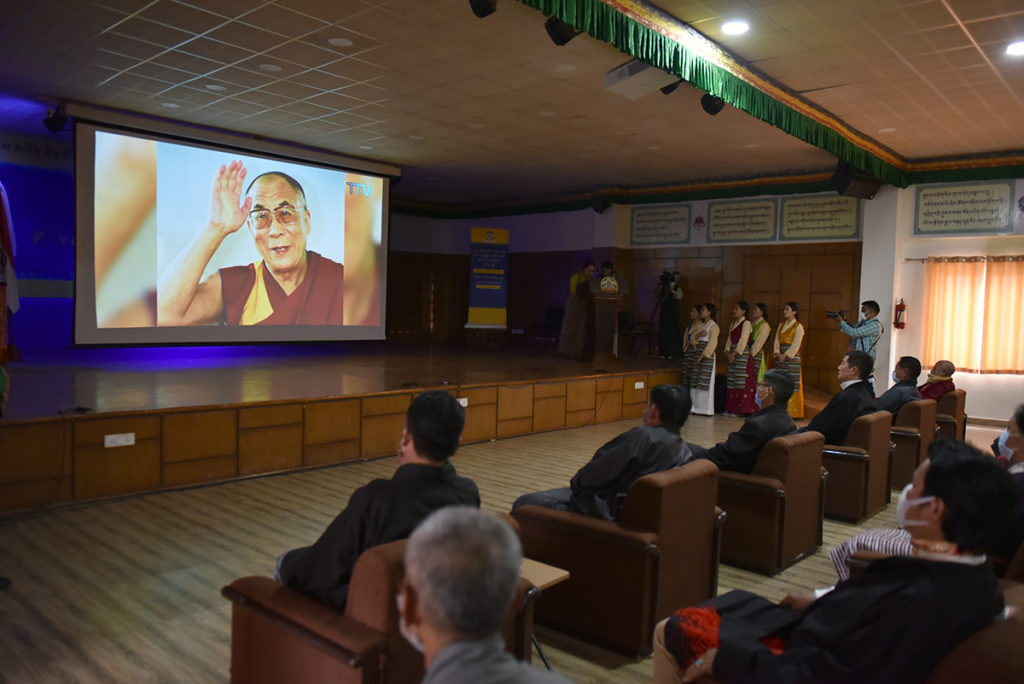 The gathering of high-level CTA dignitaries watching a compilation of video messages from leaders, Nobel laureates and friends of His Holiness the Dalai Lama from all over the world. 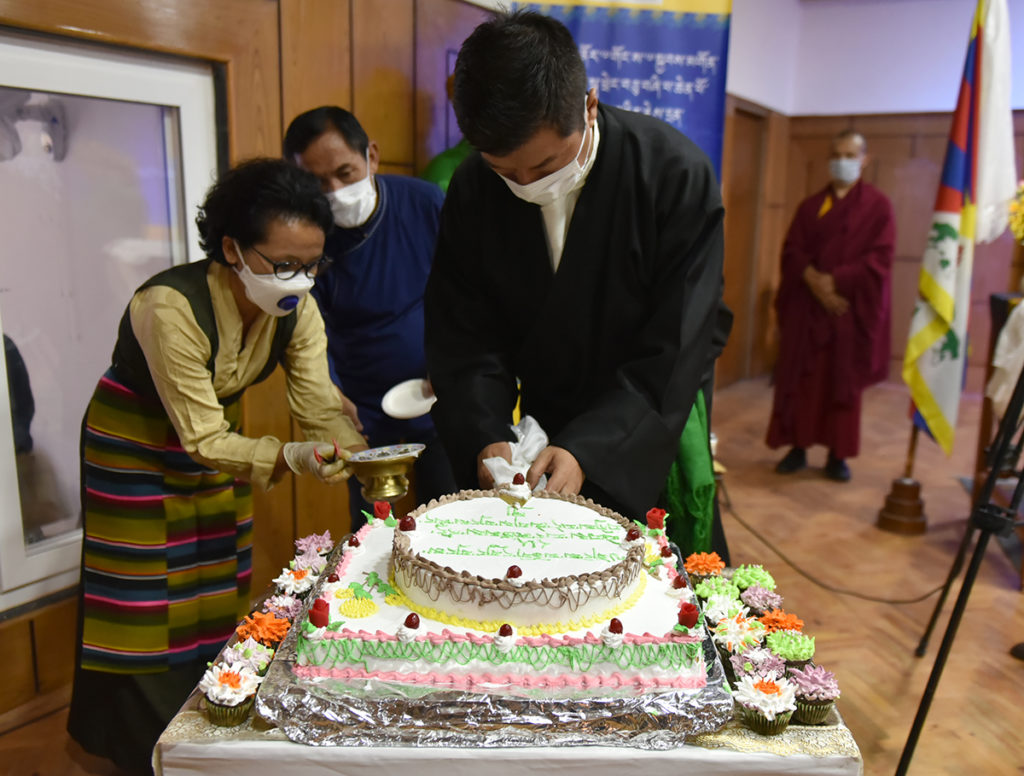 Honourable Sikyong Dr Lobsang Sangay cutting a birthday cake in celebration of His Holiness the Dalai Lama’s 85th birthday at the CTA headquarters. 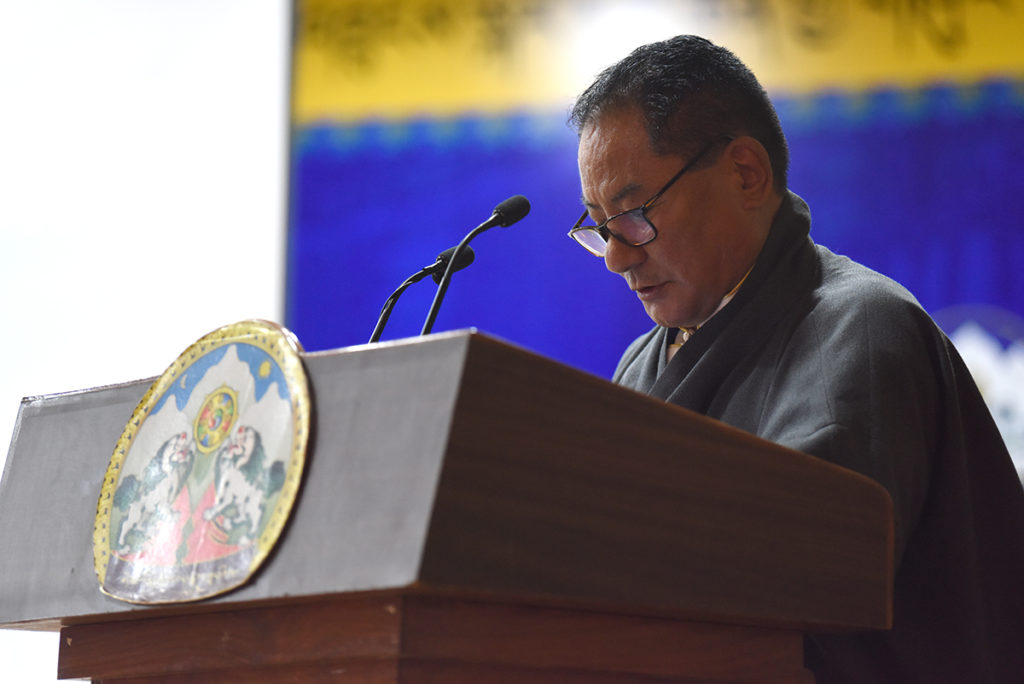 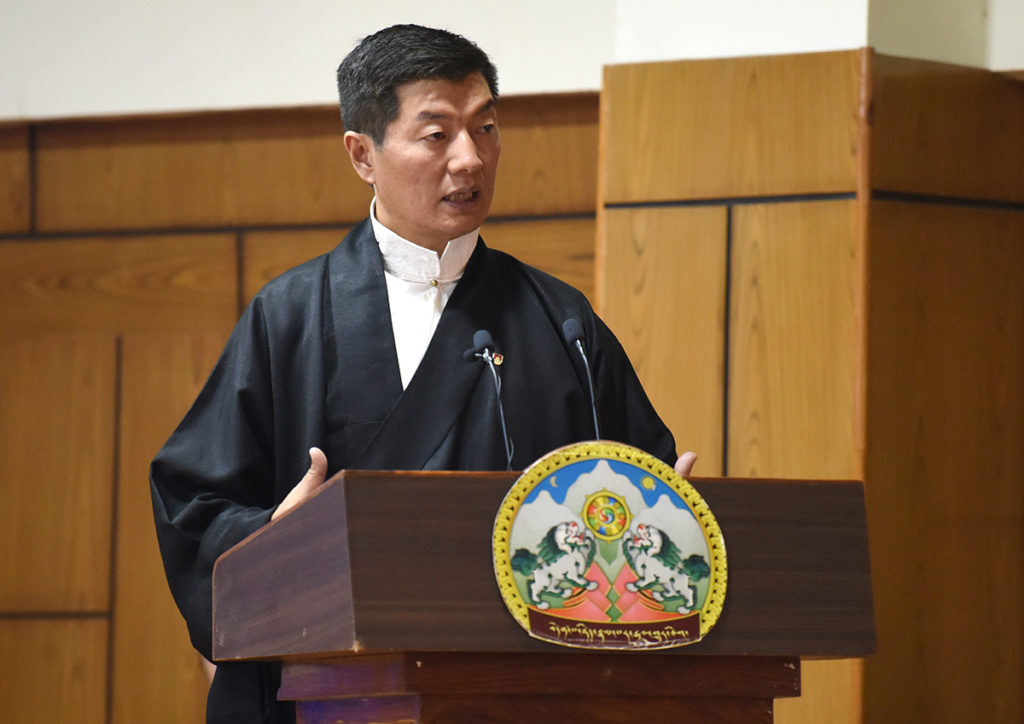 Honourable Sikyong Dr Lobsang Sangay delivering the statement of the Kashag on the 85th Birthday of His Holiness the Great 14th Dalai Lama of Tibet. Photo/Tenzin Phende/CTA 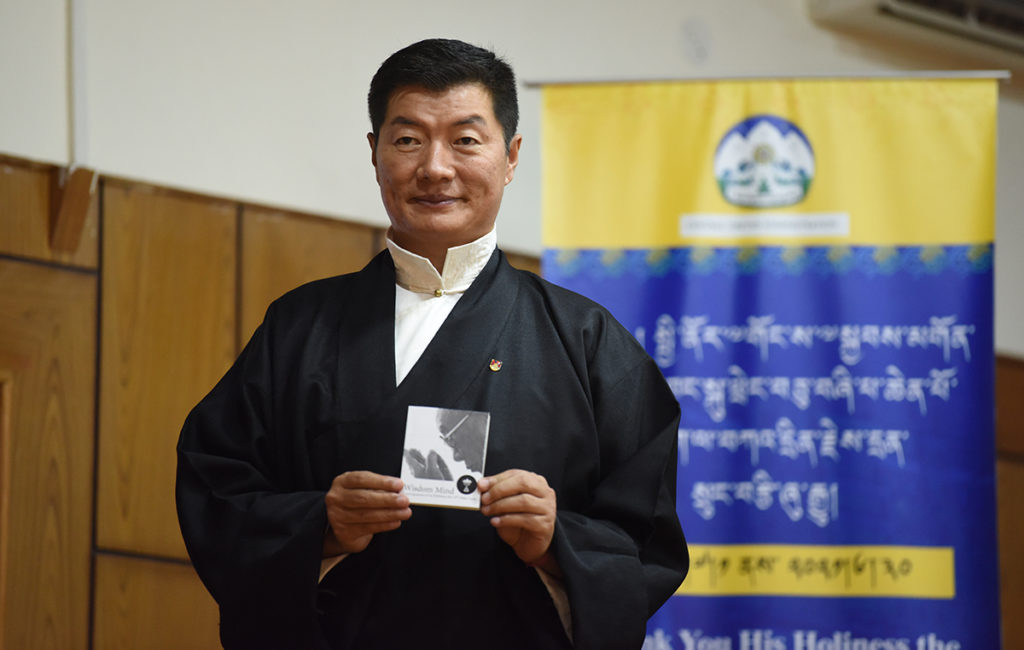 Sikyong unveils a booklet of 113 popular quotes of His Holiness the Dalai Lama, an initiative of the Department of Information and International Relations as part of the CTAs’ yearlong gratitude campaign. 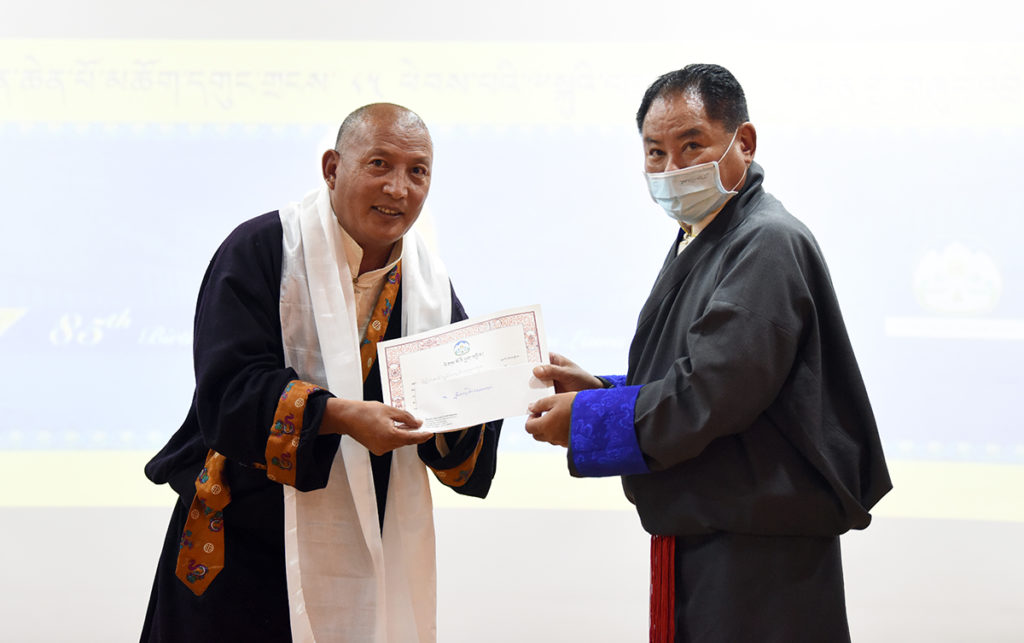 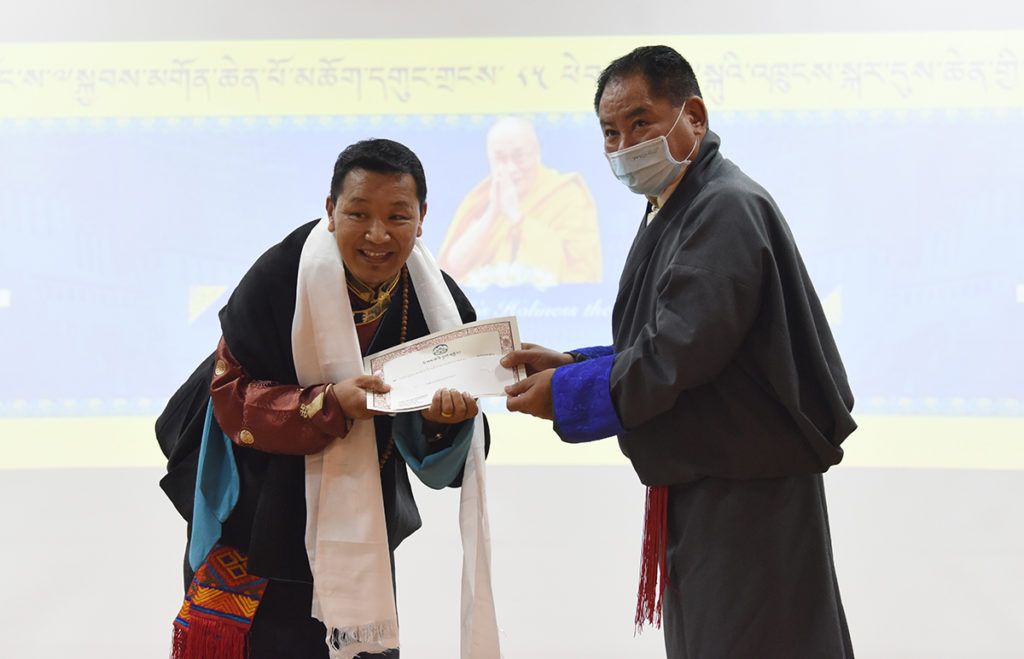 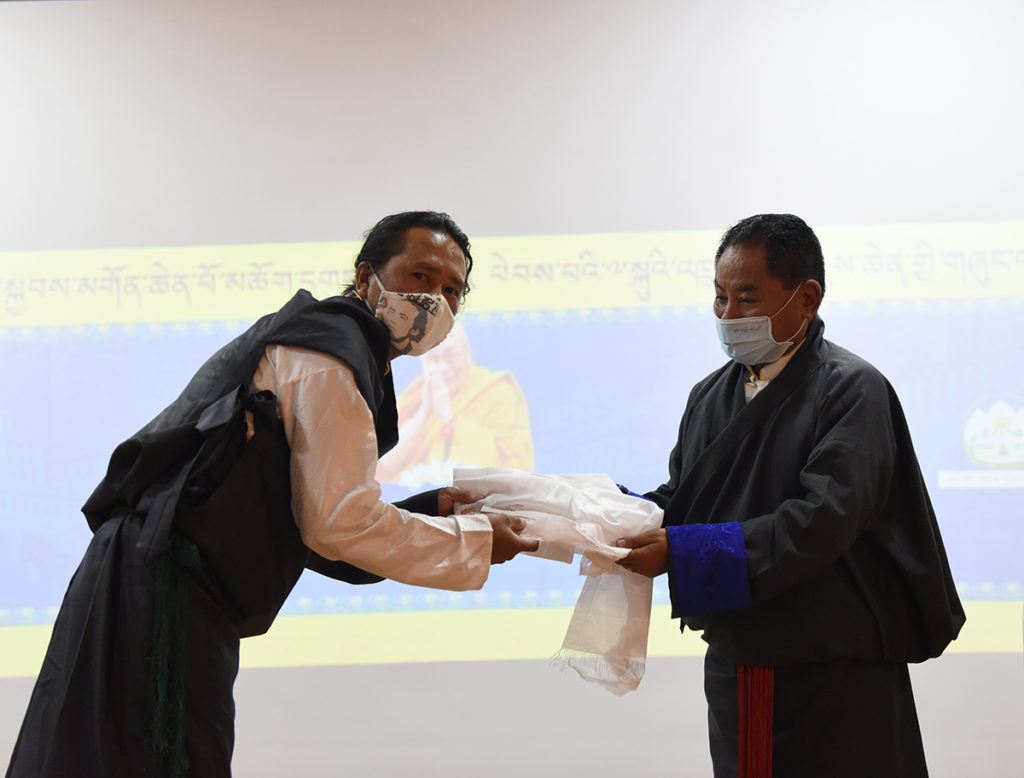 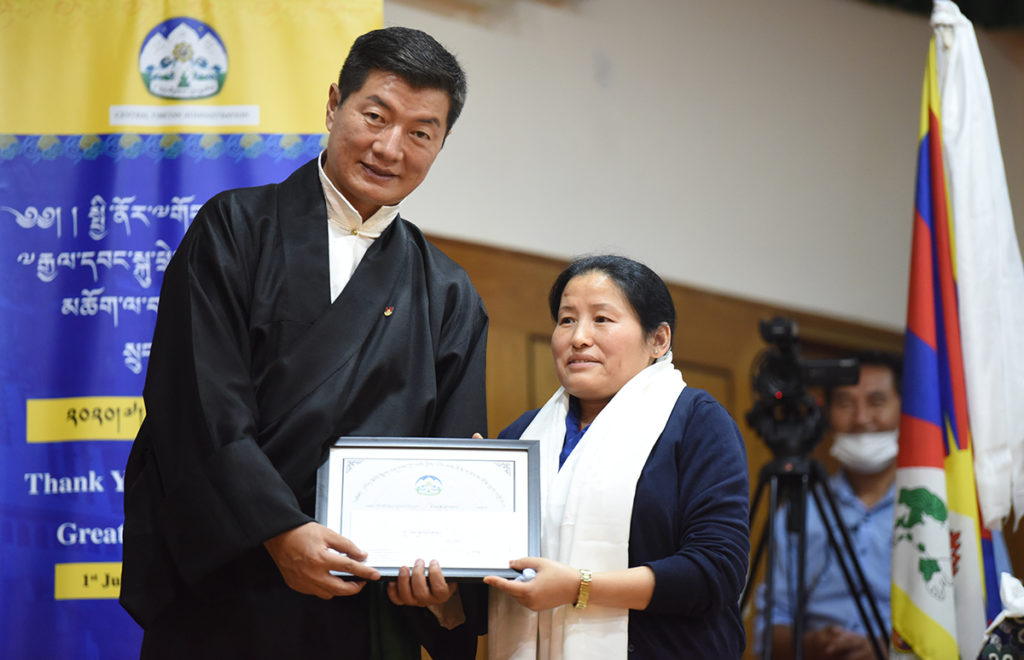 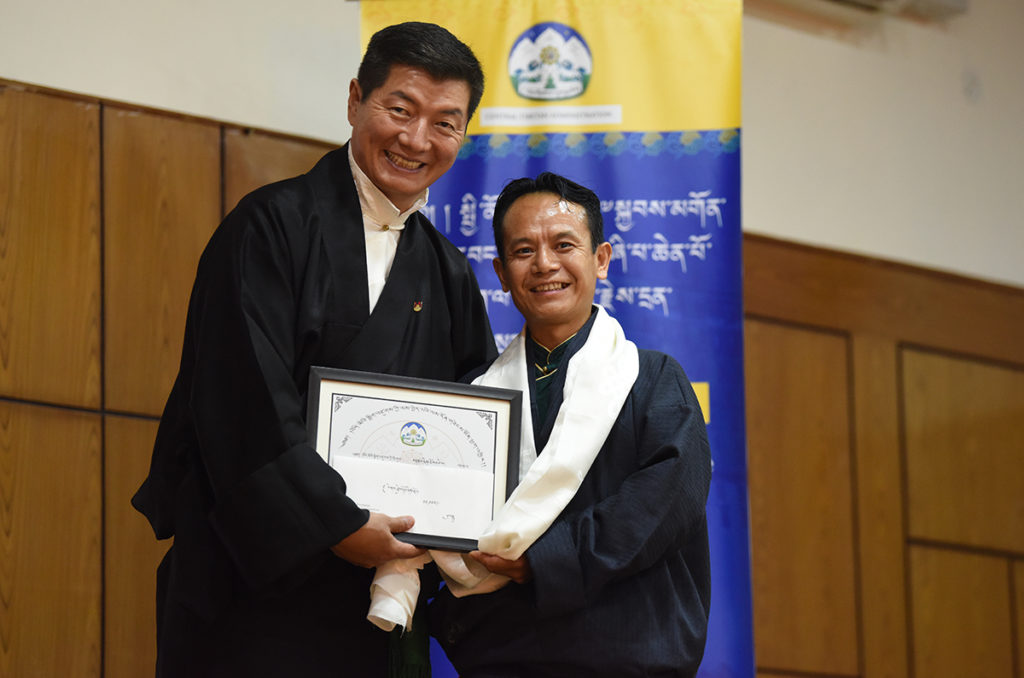